The Rise and Fall of Napoleon Bonaparte

Napoleon Bonaparte, the second of eleven children, was born in August of 1769 on a French island named Corsica. Being born into a gentry family, this made Bonaparte’s success rate very high. Growing up Bonaparte could not speak fluent French. As he entered school at the age of ten, it was a struggle for him because other students referred to Bonaparte as an “outsider” due to his background. His French had gotten better as he continued in school and he also received great education at the College of Brienne.

Don't use plagiarized sources. Get your custom essay on
“ The Rise and Fall of Napoleon Bonaparte ”
Get custom paper
NEW! smart matching with writer

Bonaparte later became a French military leader and a political leader. France was in a war before Bonaparte became involved. This war was a war between each where no one could come to an agreement. May of 1798 Napoleon had an army of 35,000 me to invade Egypt. Bonaparte only took a few losses during this time. In the end, all of lower Egypt was in Napoleon’s full control. In 1800 Napoleon Bonaparte was looked at as a tremendous strategist and was made the first consul of France.

What led to this was the fact that Napoleon collaborated with coup d’etat (sudden deposition of a government) overthrowing the Directory and establishing the Consulate. Over the years Napoleon Bonaparte had participated in a lot of wars where he lost very little of them. There were reforms that fell under Bonaparte’s rule like the Legion of Honor. This reform recognized military and civilians alike for their bravery and/or honorable service.

Another reform was the equality of all in the eyes of the law. Freedom of religion was another one as well. The most important reform though was the Napoleonic Code.

This code was designed specifically to reform the French legal system according to the principles and forbade privileges based on birth, allowed freedom of religion, and specified that government jobs should go to the most qualified. There were many more reforms that brought about the calls for equality, liberty and fraternity. Majority of Bonaparte’s victories in the wars he participated in came from outsmarting his opponents he encountered. His very first victory began with the Italian campaign in which he defeated Austrian armies attempting to restore the Bourbon monarchy.

Later on during his time in the military, Bonaparte goes to Egypt where he defeats Mamluks in the Battle of the Pyramids. He also invades the Levant and is successful against the Ottoman Turks. His most important victory comes from the war with the Austrian and Russian forces where Austria had surrendered and he defeated Prussia at Jena. He later defeated the Russians at Borodino where he took over Moscow. Of course these were Bonaparte’s important victories but Napoleon had plenty more victories. Napoleon Bonaparte’s downfall was soon to come.

All his enemies started to decipher his strategies causing his forces to become weaker. He had became real cocky by not taking offers and was being self centered. Napoleon’s diplomacy did not go well and he had to end up facing four powers: Russia, Prussia, Austria and Sweden. This was a three day war. Napoleon found himself outnumbered. This war turned out to be a very tragic loss. He suffered 38,000 casualties and lost 30,000 of his men as prisoners. In the year 1812 in total his losses were 400,000. In this event Bonaparte decided to leave and return back to France.

In April of 1813, Bonaparte signed his abdication. He was later exiled to Elba where he continued his life as ruler to preserve his title of an emperor. While he became tired of being Elba’s ruler he was able to get France back on his side. In June of 1813, he sent troops in Belgium. With British, Dutch, Belgian and Prussian forces having 234,000 men, Bonaparte had only 128,000 men causing him to lose the war. Napoleon Bonaparte was captured as a prisoner and was sent to a more remote island where he had written memoirs. In 1821 Bonaparte finally died in St. Helena.

The Rise and Fall of Napoleon Bonaparte. (2016, Jul 03). Retrieved from https://studymoose.com/the-rise-and-fall-of-napoleon-bonaparte-essay 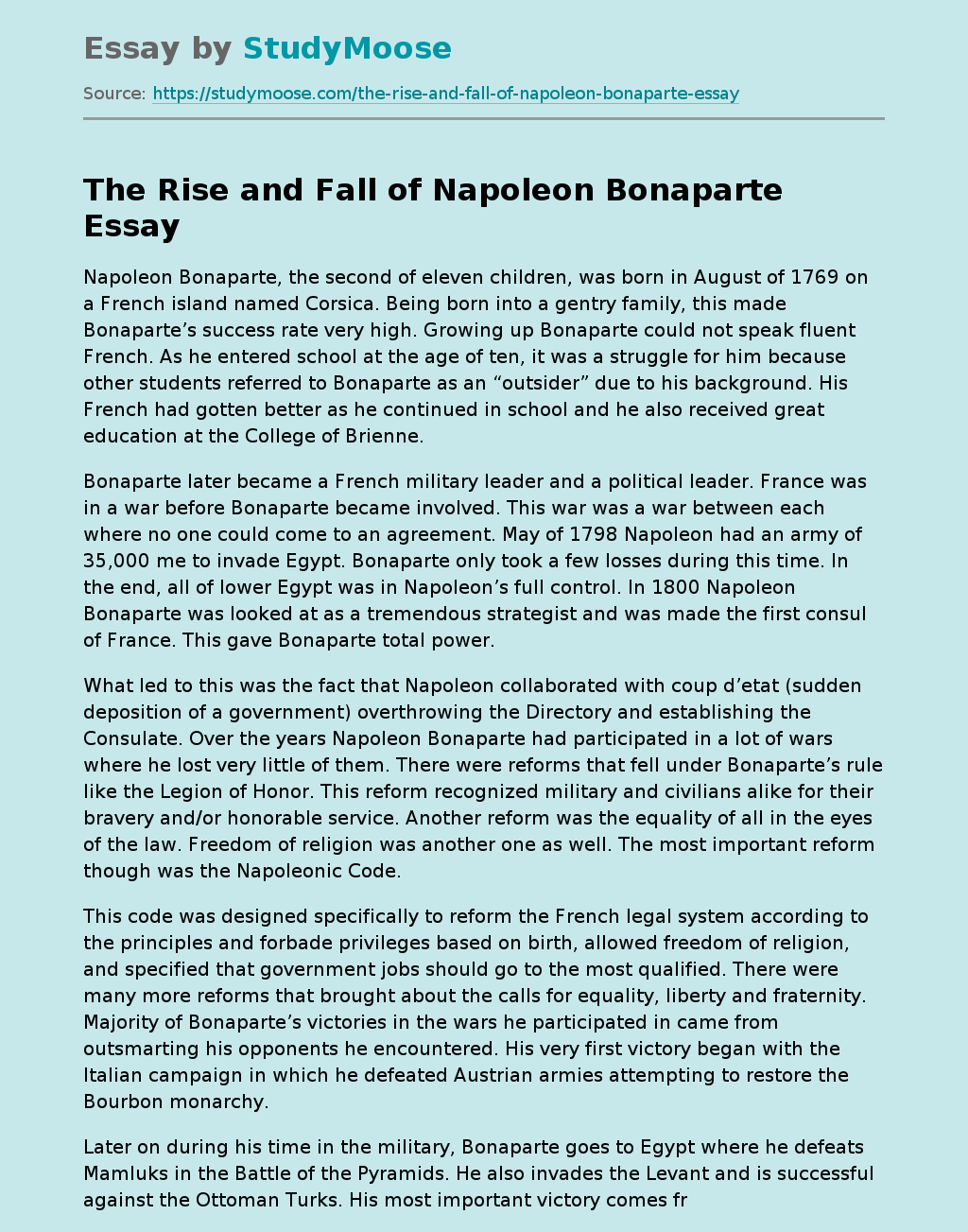