The right to bear arms

B-1 Case name: DC V. Heller A controversial topic came about in the year of 2008. It was concerning whether or not DC’s gun law was following along the lines of the Second Amendment Rights. A man by the name of Dick Anthony Heller was a special police officer and had gone in to register for a handgun for his home. The true underlying issue was whether or not the rights were protected under the Second Amendments which states: The right to bear arms.

Don't use plagiarized sources. Get your custom essay on
“ The right to bear arms ”
Get custom paper
NEW! smart matching with writer

The uprising stipulation in the District of Columbia is that they have a state law that concerns the registration of a handgun. When looking into further depth of the law the following things must be adhered to in the stipulations of having a hand gun. It states that in order to have a registered handgun it must be “…unloaded and disassembled or bound by a trigger unless they are being used for lawful recreational activities or located in a place of business.

“DISTRICT OF COLUMBIA v. HELLER. ” n. pag. SIRS Government Reporter. Web. 24 Jan 2013. ) When the case was first taken up before it came to the Supreme Court, in the lower court system the verdict was dismissed until it was later reversed. The two court systems that herd the case before the Supreme Court were the Courts of Appeals and the district court. The arraignments for the plaintiff were; Dick Anthony Heller was dismissed for another four years until it was taken up again.

In the arraignments for the Defendants “…DC found that the challenge to the constitution and its validity was without merit …” It seems as if they were trying to throw salt on the technicality of what the Constitution says in Amendment two and the right to bear arms. In the end what the plaintiff really wanted were his rights to be acknowledged, being that it’s in the constitution and he was a police officer at the time. As well as he wants to be able to have a gun in his house for protection as most people would want.

In the lower court systems had voted against what the plaintiff had brought forth as evidence. When it was finally hear in the Supreme Court the case was ruled in favor of the plaintiff. Justice Stevens wrote majority of the decision by stating that the Second Amendment is given to everyone that is a citizen of the United States and that right can’t be taken away to a certain extent. There were concurrent opinions that were made by Justice Stevens who said if things are within our rights then we should be able to obtain them and use them to the fullest extent of our abilities. District of Columbia v. Heller a? “ Case Brief Summary. ” Lawnix Free Case Briefs RSS. N. p. , Fall 2008. Web. 28 Jan. 2013. ) The dissenting arguments of opinion came from Stephen Breyer, who stated that the second amendment is only for militia related ordeals and not a matter of being used as self defense. Heller at the time was a special police officer so therefore it was really questionable on why the lower court verdict had made such a big deal out of the entire situation.

The majority opinion was in favor of the plaintiff who wanted to register for a hand gun in the first place for the protection of his home. The importance of the case was that a man was being withheld his legal rights that are stated under the second amendment. It showed as well that a state law can be overturned by a higher government system. This case specifically was a major part of the Constitution because it showed a prime example of states trying to withhold the rights that we have as citizens. It brings light to the different things that certain state governments try to bring down and cover up. 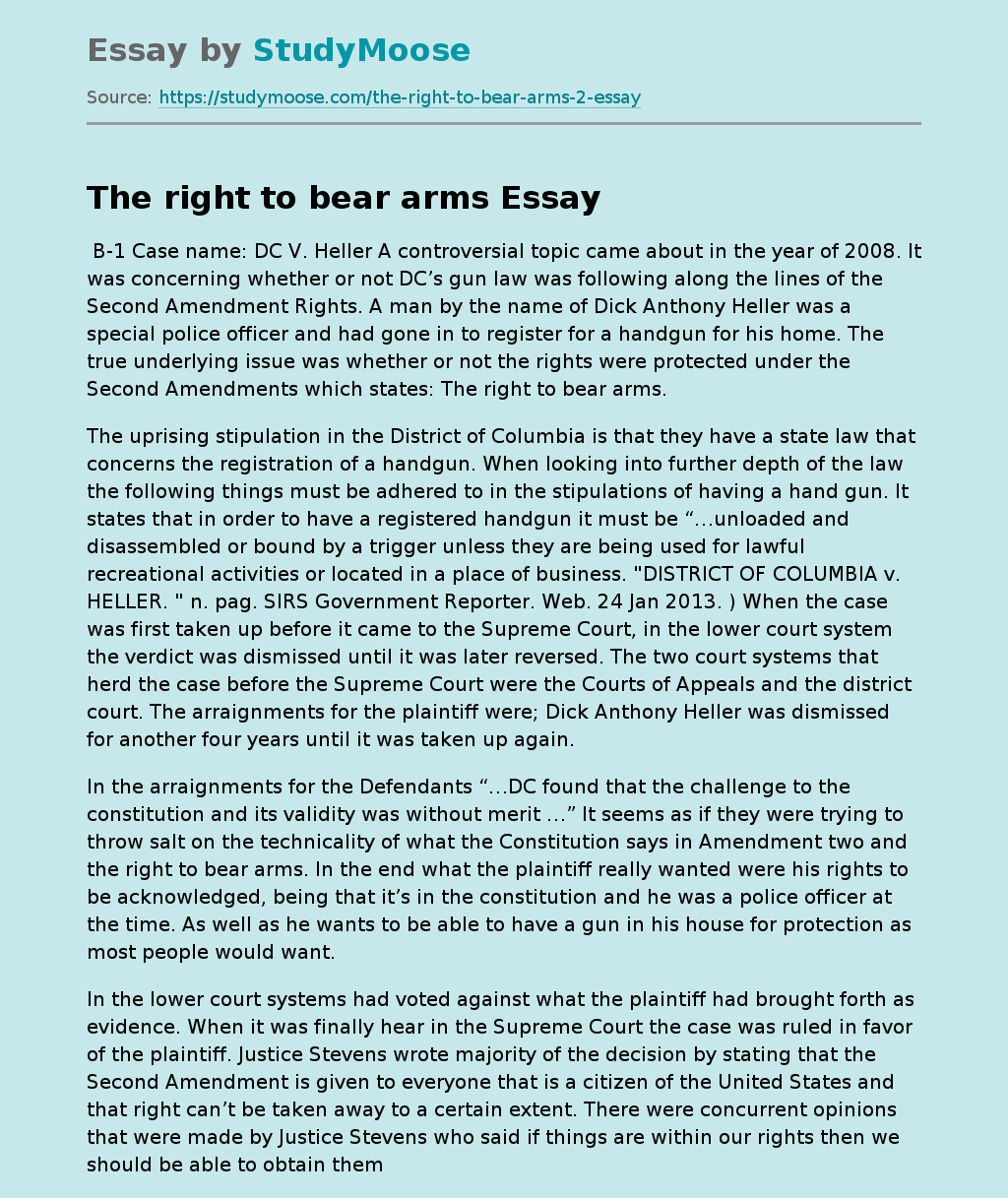