The Revolutionary Generation provides a concise, yet enjoyable read about the 1790’s, a period which he calls the most decisive decade in American history. During this period, the men who helped create an independent America now focused their energies on defining and directing the course of the newly independent nation. Thus, it was a fragile period often filled with successes and failures, as the men made decisions without having any set blueprint to follow.

Ellis captures this fragility through six events that seem somewhat disconnected, but ultimately had a great impact on the new nation.

Don't use plagiarized sources. Get your custom essay on
“ The Revolutionary Generation ”
Get custom paper
NEW! smart matching with writer

The first event is the duel between Alexander Hamilton and Aaron Burr. Ellis presents both a short and long version of the events of the duel. For the review, the short version will suffice. On the morning of July 11, 1804, Hamilton and Burr each rowed across the Hudson River to a site near Weehawken, New Jersey. Following the code duello, the two men each took a pistol and shot at each other.

Hamilton was hit in his side, and would die the next day.

Burr escaped uninjured, but his reputation was in tatters. Ellis considers this event important because it was the first violent occurrence within the mostly nonviolent movement for independence. Furthermore, it demonstrated the changing political situation of the day. Federalism was on the decline, and would remain so for a long time to come. The second event is a crucial dinner party hosted by Thomas Jefferson. The guests were Alexander Hamilton and James Madison.

Together, the three men hammered out a deal that ultimately saved the fledgling nation.

To summarize, the Federalist Hamilton wanted the American government to assume all the state debts from the Revolutionary War. The Republican Madison opposed this plan, as it would give the government too much power. The compromise suggested: Hamilton would agree to the national capital being built on the Potomac River if Madison agreed to his plan concerning state debts. Madison agreed. Ellis makes clear that the importance behind this dinner was not just what it accomplished, but what it represented as well: a triumph for the Federalists, as well as a triumph for the democratic experiment so many felt would fail.

The men of the Revolutionary era

The third event concerns the issue of slavery. The men of the Revolutionary era were fully aware of how immoral slavery was. However, the majority felt that disposing of slavery would surely tear the new nation apart. Ellis thus focuses on a debate within Congress, in which it was ultimately decided that the federal government would not interfere with slavery until 1808, at which time it would be officially abolished. In actuality, slavery would prevail well into the 1800s, and ultimately play a prominent role in the outbreak of civil war within the nation.

Ellis emphasizes the point that this was temporary fix to a problem that would hugely affect the nation in the years to come. The fourth event was the farewell address written by Washington. Ellis points out that it is considered to be one of the most important documents within American history, and provides the reasons why. First, it set the precedent for a two-term presidency, although this would be challenged during the 1940s, when Franklin Roosevelt would serve four consecutive terms.

Second, it made clear that America was not going to be a monarchy, but a democratic government. The address also spoke on issues such as party politics and remaining neutral with regard to European squabbles. Although not all the advice given in the address would be followed, it nonetheless played a role in shaping how the government would be run from this point on. The fifth and sixth events concern the relationship between John Adams and Thomas Jefferson.

Their friendship was formed during the American Revolution, when both served on the Continental Congress, and later as ambassadors to foreign countries. However, their friendship would end during the presidency of Adams, and it would be years before they would speak to each other. Yet, when they did communicate again, it was on a vast scale. The letters they wrote to each other, beginning in 1812 and lasting until both died in 1826, are some of the most important documents of American history.

Various topics with regard to the nation were discussed, yet Ellis points out that for each, the letters served a different purpose. For Jefferson it was the chance to rebuild a friendship and express thoughts and opinions that would have remained unknown. For Adams it was the chance to solidify a place in history. But just as Adams feared, it would be Jefferson who would be remembered far more than he. So ends Founding Brothers, a book that gives the reader insight into the early years of the American nation.

The goal Ellis set for himself – presenting a written picture of how six unrelated events helped to shape the nation – was met with resounding success. Not only is the book easy to read, as stated, it is not very long, nor is it bogged down with minute details that do not have any bearing on the subject at hand. For students of American history, or for those who just have a general interest in American history, this book greatly captures a crucial period in American history, a time when the decisions that were made could have made or destroyed the Union. 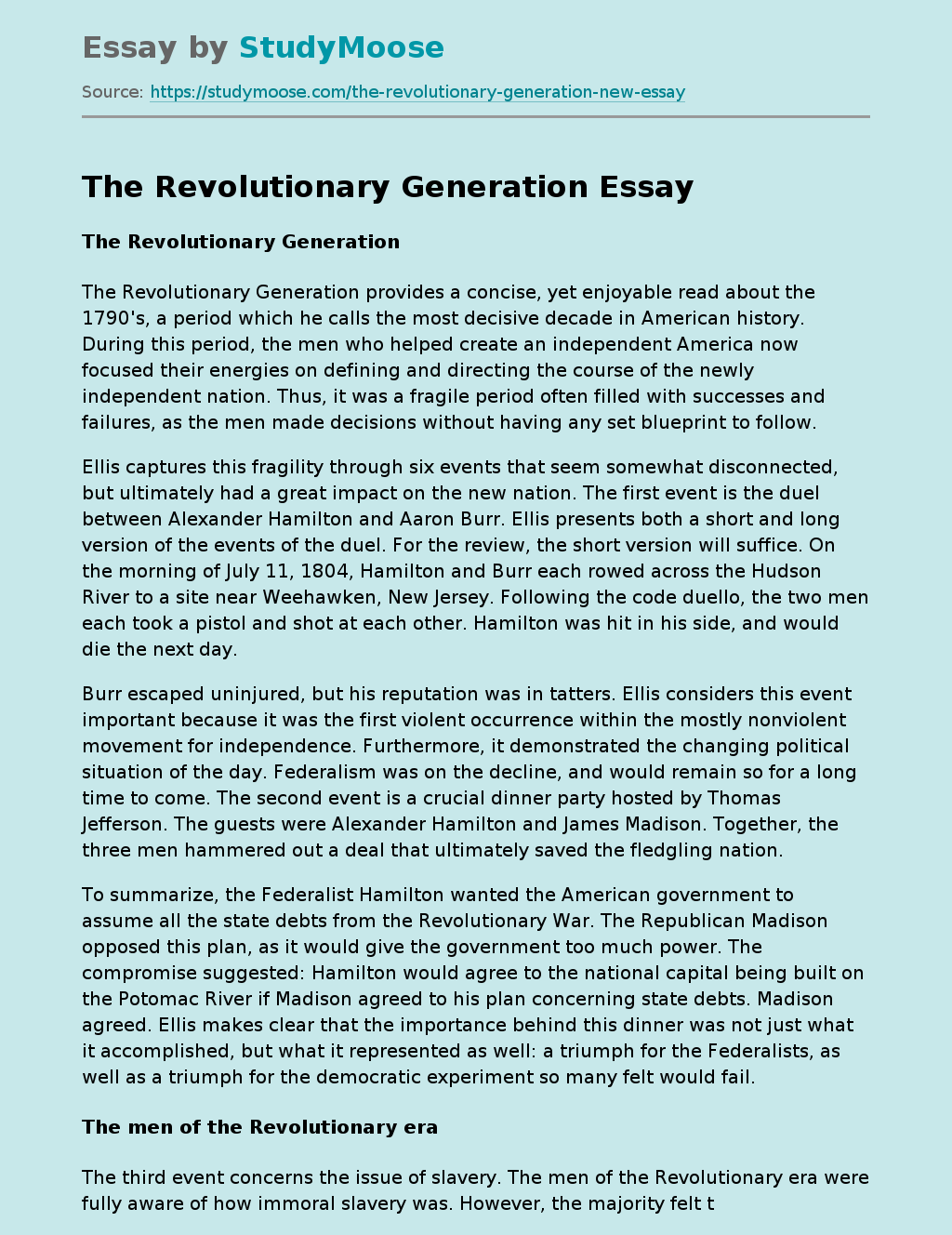