In the case of “The Reluctant Security Guard”, I do believe that the security guard took the correct action regarding putting drunk drivers out of the mall parking areas onto the highway. I would have, in this situation, acted in a similar manner as he. By this I mean I would have contacted my superiors and spoke of alternatives other than putting intoxicated drivers on the highway that may cause harm to others as a result. Taking this into consideration, drinking, and driving are unlawful and the security guard had sworn to protect and obey all lawful orders under the supervision of the police in the said city.

Turn in your highest-quality paper
Get a qualified writer to help you with
“ The Reluctant Security Guard ”
Get high-quality paper
NEW! AI matching with writer

I, on the other hand, do not feel the security guards termination was unjustified or unwarranted by his employers. Because while he was trying to do the right thing under one rule he was disobeying and breaking another rule that he knew would or could cause his termination as stated in his manual that was sworn upon, signed and acknowledged by himself.

Proficient in: Do The Right Thing

This situation could have been handled differently on behalf of both parties involved. In this case the security guard took an oath to abide by certain rules and regulations, and even though he was trying to follow one set of rules he still broke another.

The Blue Mountain Company was in the wrong for changing their policy from calling the police on intoxicated people in the parking areas to just sending them on their way into the busy streets were they may kill some unsuspecting soul.

The way I would have handled things differently is by making it a judgment call as to calling the police or letting them go on their way. But the security guard did try the proper channels without success so he should have abided by their rules because he was in their employment. And if there was something he did not like, he should have resigned and then went public if he chose to do so. But, in my opinion, both parties were to blame for their decisions made concerning the way this situation was handled. Yet, still the security guard worked for this company, and regardless they make their own rules and you, the employee, must abide by them. 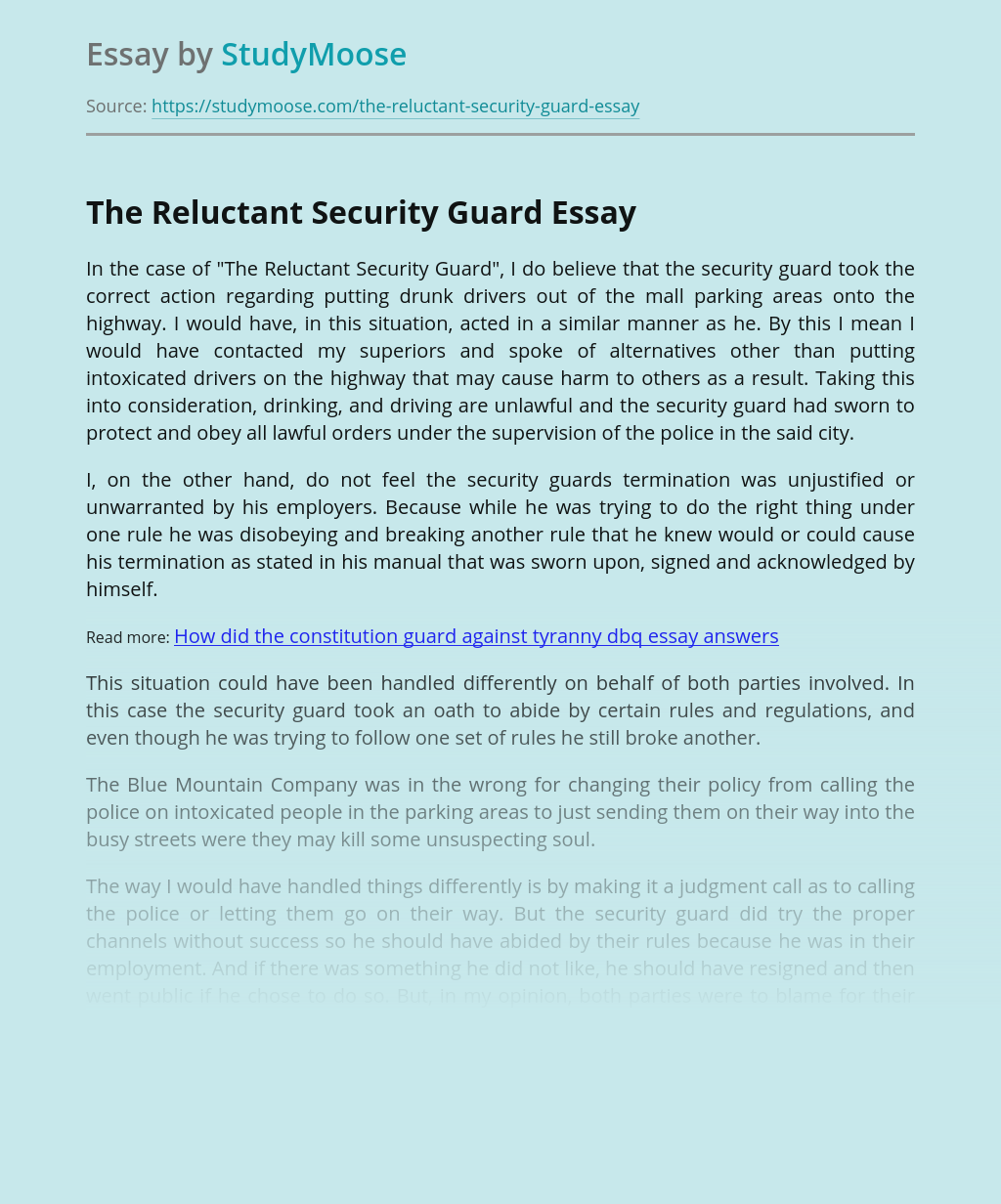 Turn in your highest-quality paper
Get a qualified writer to help you with
“ The Reluctant Security Guard ”
Get high-quality paper
Helping students since 2015
Stay Safe, Stay Original