The relationship with Beatrice

Arthur Miller uses elements of Greek tragedy in the play AVFTB. For example, there is one tragic hero (Eddie Carbone, the protagonist) with one tragic flaw (excessive love for his niece. ) This tragic flaw (hamartia) will lead to Eddie’s inescapable destiny hence his death. As the play progresses we get hints from our narrator/ character, Alfieri. Alfieri is a compassionate, respected lawyer who portrays the themes of law and justice in the play; nevertheless he is not able to alter Eddie’s inevitable future.

Don't use plagiarized sources. Get your custom essay on
“ The relationship with Beatrice ”
Get custom paper
NEW! smart matching with writer

For example, Alfieri’s desk is on the stage at all times to show that he was powerless to change Eddie’s impending doom, ‘sat there as powerless as I’. Arthur Miller makes Alfieri appear in every interlude and uses the technique foreshadowing, giving the audience an indication about Eddie’s final fate, ‘watched it run its bloody course… we are only thought of in connection to disaster. ‘ The play is a tragedy as it contains a devastating ending which is the death of the protagonist.

Eddie’s fate becomes a reality when Marco stabs him in the final climax of the play, ‘his death useless.

‘ Various other conventions of Greek tragedy exposed in AVFTB are: epilogues; episodes; dramatic irony; choruses and prologues. All of these techniques add tension and suspense to the play and leave the audience glued to their seats. On the other hand, the play consists of two acts whereas in traditional Greek tragedies there is only a single act. After Alfieri completes his prologue he walks into darkness according to the stage direction.

This could symbolize that Alfieri is literally and metaphorically going into the darkness or in other words he is going back to the same old social codes.

This is probably because he knew that Eddie was going to die and he could have prevented it however, he sat there, ‘It wasn’t as though there was a mystery to unravel… I could have finished the whole story that afternoon. ‘ This illustrates that Alfieri might be going back to the same old social codes as he doesn’t care if a just man dies or not. Arthur Miller probably does this too show the audience that everyone has a dark side and also to change their stereotypical views on lawyers which is they don’t do anything ghastly. In the first interlude Alfieri says, ‘He was a good a man as he had to be.

‘ This suggests that he tried to deal with problems in his family at the best of his ability however; this won’t be able to alter the final outcome of his destiny. Therefore, it creates an atmosphere of foreboding which builds up tension and suspense in the drama. We see this point being illustrated when Eddie senses that Catherine is starting to feel attracted to Rodolfo so Eddie starts to object to Rodolfo for ridiculous reasons. He even does this to innocent Catherine when he says that he is only after an American passport.

In addition, in the first interlude Alfieri also says, ‘Eddie Carbone never expected to have a destiny’ and then immediately after that the immigrants arrive. Destiny is an unavoidable path of someone’s life therefore; no matter what Alfieri does he would not be able to change something that is already written in stone. The reason why Alfieri immediately introduces the immigrant after he says the quote is to show that each of these characters lead to Eddie’s death/ destiny. Marco is the actual person who stabs Eddie and Rodolfo is perhaps the reason behind Eddie developing a tragic flaw.

If they never arrived then possibly none of this would have happened. Perhaps the relationship that Catherine and Rodolfo share was the trouble that would not go away as when their love for each other grew, it seemed as if the frustration and anger built up in Eddie almost simultaneously. When Beatrice sees this trouble she confronts Eddie and says, ‘When am I gonna be a wife again’ hoping that this will divert his attention and also to allow Catherine to make her own decisions and live her life the way she wants to live it. Nevertheless, she doesn’t succeed.

Therefore, Arthur Miller uses foreshadowing again to indicate that these characters have a major role in the death of Eddie Carbone. In the third interlude Alfieri says, ‘It was at this time he first came to me’ suggesting that Eddie had never had any problems with the law before. It also suggests that since the immigrants have arrived Eddie seems to get more disappointed, devastated and distraught by the minute (story developing into a tragedy. ) Before Eddie saw Alfieri as a friend however, his tragic flaw has made him feel as if everyone is against him so now he sees Alfieri as a lawyer only.

In addition, Eddie wants Alfieri to tell him that he is 100% correct and that Rodolfo is breaking the law. However, Alfieri does the complete opposite and tells Eddie that no one is breaking the law and that Eddie has no proof to back up his accusations, ‘I can only deal in what’s provable. ‘ Alfieri portrays this idea by repeating the word law, ‘the law is very specific… The law does not. ‘ Alfieri uses repetition to try and persuade Eddie that there is nothing that the law can do.

Alfieri also advices him to get the whole situation out of his mind. Nonetheless, Eddie tries to persuade Alfieri that the law can do something by constantly saying ridiculous things about Rodolfo, such as: he is tricking Catherine to get a passport; Rodolfo is actually homosexual and that the whole relationship is absolutely wrong. This suggest that Alfieri tries to advise Eddie to not make any stupid decisions (trying to change his destiny) and also that the law cannot do anything about this situation.

After Eddie leaves Alfieri’s office, Alfieri feels that there is nothing more that he can do to change Eddie’s fate as Eddie doesn’t pay attention to what he is saying, ‘spread an alarm, but nothing has happened. ‘ The information that Alfieri gives him just goes through one ear and out the other. As Alfieri no longer knows what to do he seeks advice from an old wise lady in the neighbourhood. The lady says, ‘pray for him. ‘ This brings a new element to the audience which is religion, so that the story can be more appealing for a wider range of people.

It is also to show the audience that it is now up to God/ fate to decide whether Eddie Carbone deserves to die or not. This suggests that Alfieri is powerless from preventing Eddie’s fate from becoming a reality. As the play progresses the relationships between the characters become more physical and verbal so as a result this builds greater tension leaving many unanswered questions which makes the audience feel the urge and excitement to stay and see what is going to happen. The story develops into a tragedy as there are a lot of disputes and later on Eddie gets stabbed by Marco as an act of self defence.

The conflict unfolds as Eddie’s homosexual prejudices of Rodolfo uncover. As he has blonde hair, his increasing love for music and many skills that he possesses such as, cooking and dressmaking which is seen in Eddie’s eyes as feminine. Rodolfo has a motive to marry Catherine and become a citizen so he can work in America legally. Eddie also has a motive as he has come to believe that Rodolfo is using his niece to work in the country so that he does not have to face the problems faced by his older brother Marco, so there is an increased tension between the two of them.

Eddie’s portrayal has become very negative as he is the only character in the story to believe in these prejudices. The relationship between Eddie and Catherine is that she is very angry at Eddie as he does not approve of her to be Rodolfo’s wife, so she is deliberately provocative towards Eddie, ‘you wanna dance. ‘ Eddie has a lot of relationships with different characters in this play, one of which is the relationship with Beatrice.

She has noticed that Eddie gives more attention to his niece Catherine, so she is extremely jealous that no one gives her attention. This emotionally affects her as Beatrice tends to put others before her and bottles things up inside her so as a result she sometimes bursts with anger, ‘well then, be an uncle’ to Eddie with utter disgust. The second key moment is when Eddie acts in an unusually emotional way when he is complaining to Marco that Rodolfo is making Catherine stay out late after he bumps into them when they are leaving from the cinema.

Marco is the peacemaker in this scene as he says, ‘you come home early now’ this argument continues between the characters, so Marco repeats himself in order to end the argument. After this Eddie tries to warn Rodolfo that American girls are just as strictly brought up as Italian girls to show that there are some similarities between the two social codes and that if he wants to marry Catherine he should seek the permission of the father just like in Italy. Beatrice then warns Eddie that he should just be an uncle as he is taking things way out of proportion.

The relationship with Beatrice. (2020, Jun 02). Retrieved from https://studymoose.com/the-relationship-with-beatrice-6915-new-essay 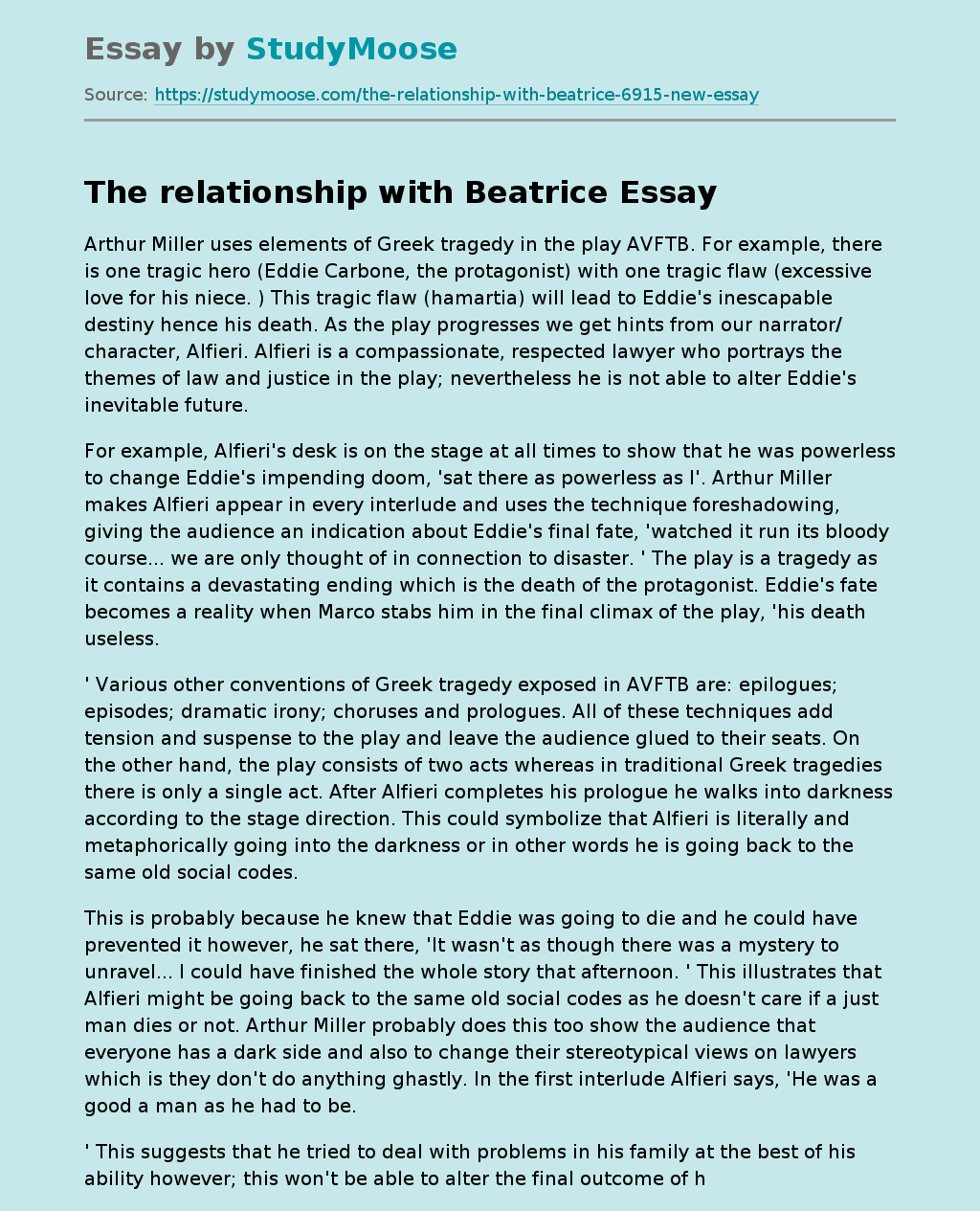