1994 the year NAFTA had become effective, delegates from three Countries (Canada, United States and Mexico) had signed a free trade agreement in December of 1992. The leaders of these nations signed the agreement with the hopes of prosperity. Isn’t ironic that five years later we are starting to see that NAFTA was not beneficial but in fact the opposite. Since then NAFTA has ignited fierce opposition from labour and environmental groups. They have feared that many jobs would be lost either to the U.

Don't use plagiarized sources. Get your custom essay on
“ The Relationship Between the Brain Drain and the North American Free Trade Agreement ”
Get custom paper
NEW! smart matching with writer

S.A or Mexico. Currently the country taking most of Canada’s work force is the U.S with their grip on technology they are in fact luring Canadians, the media has called this the “Brain Drain”. NAFTA has also created environmental issues such as a four-lane highway just for trucks, to make it easier to transport products to one side of the border to the other, which may or may not be built. But if NAFTA intended to be a good for the nation then why has it turned out to be so bad, would it be in Canada’s best interest that NAFTA is re-signed.

How does the Brain Drain Relate to NAFTA?

The brain drain is caused when companies take our highly trained out of Canada and work for them (usually in the U.S), it also makes it easier for companies to move from one country to the next.

The brain drain is a Canadian problem. Why are Canadians leaving for the U.

The low Canadian dollar Vs. the high American dollar, also the higher wages in the States is a big incentive for moving. (e.g. A worker for Nortel gets paid $48,000 Can or if he works in the U.S he will get paid $53,000 US. Same Job different pay)

But why do you get paid differently for the same job. It is fairly simple companies in the U.S get tax breaks which allows them to pay their employee’s more.

There is more opportunity for success in America then in Canada because America government has past legislation that makes it easier to immigrate into the country and become a citizen and once you’ve become a citizen you have access to a great amount of money to start a business.

This is the most important any employee wants is appreciation. No person would be happy in a job where they are not appreciated. That is the main reason why people leave for America.

What are Possible Solutions for the Brain Drain?

Since NAFTA was established a lot of people lost their jobs mainly because the companies they had worked for had left for the U.S or the company started to restructure employee’s were downsized. Downsizing is another word for fired. In order for Canada to stay competitive, we must put a stop to the brain drain. By keeping our work force in Canada and also by increasing population. It would help the Canadian economy and also the unemployment rate.

NAFTA is not only affecting employment but also the environment. Canada has 9% of the earth’s land and also the biggest fresh water supply in the world. We must protect that from excess pollution, logging and fishing. But since NAFTA has come into effect, pollution levels have increased. There have also been plans to sell Canada’s water to foreign countries.

“Newfoundland, Which indicated in February it would support the Federal initiative, is now considering a water export project that would create employment in the job-poor province. Quebec wants to hold its own public inquiries before acting, and has spoken out against what it considers Ottawa’s interference in a provincial matter. It could be years before Quebec reaches a provincial policy, which will hold up the national pact indefinitely, federal officials said.”

“Aquaroute plans to export about 10,000 tons of water a month, Mr. Barbeau said, adding that he sees no need for the company to obtain a government permit.”

“A California company is suing Ottawa under the North American free-trade agreement for not being allowed to export water from British Columbia, and McCurdy group is moving ahead with its plans in Newfoundland”

“The federal government is concerned about the impact that bulk exports of water could have on trade and the environment.”

“Water sitting in a lake or river is considered a natural resource but not a good or product, so trade rules don’t apply. But once someone packages the fresh water and sells it, it becomes a good.” (Scoffield, 1999)

The Relationship Between the Brain Drain and the North American Free Trade Agreement. (2021, Dec 07). Retrieved from http://studymoose.com/the-relationship-between-the-brain-drain-and-the-north-american-free-trade-agreement-essay 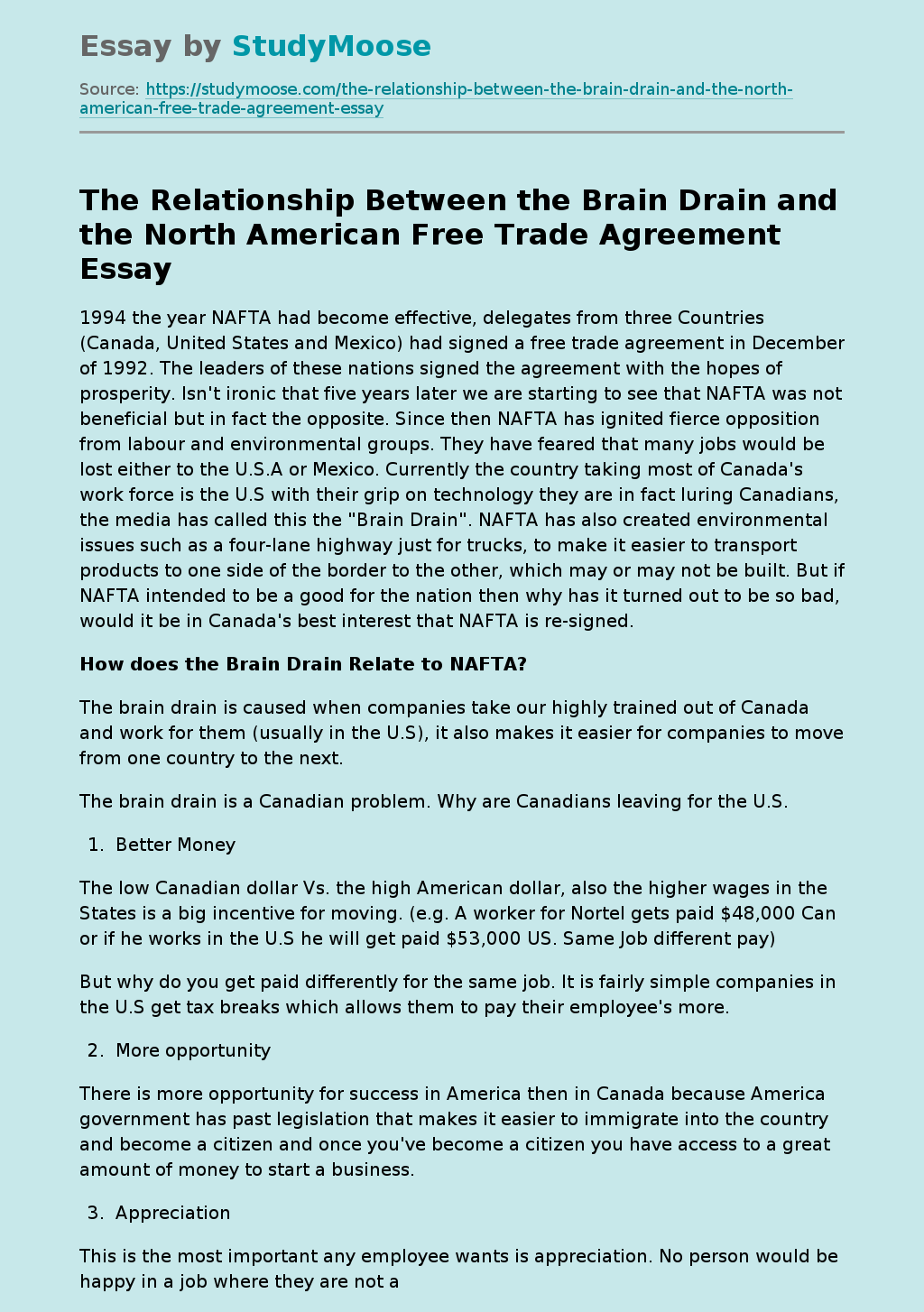