The Relationship Between Language and Ethnic Identity : a Focus on Tibetan

To begin with, according to the background history of the Tibetan language, it is not mere a language like modern English with a wide extend of speakers who can comprehend each other easily depending on familiar vocabulary, grammar. As an old linguistic proverb states: “a dialect is a language without an army and a language is a dialect with an army, and Tibetan can be considered as a set of languages instead of dialects” (Congressional-Executive Commission on China, 2003, p. 5). In tradition, language represents the culture of each ethnic, and has a great effect on ethnic identity.

Don't use plagiarized sources. Get your custom essay on
“ The Relationship Between Language and Ethnic Identity : a Focus on Tibetan ”
Get custom paper
NEW! smart matching with writer

If a language of one ethnic group is well-developed, it can strengthen its ethnic identity. On the contrary, the ethnic identity can be destroyed with the extinction of its language. Furthermore, “Languages are not neutral. They convey very specific social and cultural behaviors and ways of thinking. The extinction of the Tibetan language will have tremendous consequences for the Tibetan Culture. The culture cannot be preserved without language” (C.

E. C. C, 2003, p. 2). As a result, language is like a symbol within each ethnic group, which can represent a visible soul according to the way of talking, and the history of language.

The retention and development of the culture of a nation is based on language, especially the Tibetan language. For this reason the Tibetan Language is the pedestal of Tibet’s culture identity besides religion. ( Simon, 2002; Nima, 2001) Additionally, Tibetan language has a great influence in religion because the Buddhist scripture in Lamaism is written in Tibetan, which demonstrates the close relation of religion and language.

Moreover, people communicate with each other in the Tibetan language in some remote places, especially among the old and young.

Those people who lost their jobs are relatively similar to foreigners who can’t get jobs in their own country because of lacking linguistic diversity. The culture of their city is being ignored and depreciated while they are witnessing the process, which also make people generate the same feeling (C. E. C. C, 2003, p. 2 ). The language issue does not only exist in culture and education, which also appear in society and affect economy. Moreover, Tibetan language and culture is crucial for secularizing and regenerating the Tibetan society.

The principal job at that time was fostering Tibet culture and developing the Tibetan language. However after the 1970s, China’s government published a series of requirements for Tibetans that is to learn Chinese, meanwhile popularizing Chinese became the most important mission in Tibet. The changing of the language policy leads an alteration in education. In fact, school education was not only used as a teaching method but also a way to transmit culture and to improve the language. Currently, Tibetan- Chinese bilingual education is the major teaching pattern in Tibet’s schools.

The aim of bilingual education is weakening the impact of the Tibetan language on Tibet’s society instead of expanding the influence of Chinese. In Tibet, different people have different views on bilingual education. For young Tibetans, they benefit from bilingual education which offers chance for them to learn both Chinese and the Tibetan language. Hence they will acquire a certain basic compression of both languages. After graduation, they may think Chinese is more useful because at this time, a lot of official documents, notices, and letters of certification are written in Chinese.

Nevertheless, still a lot of Tibetans insist that teaching the Tibetan language must be strengthened in schools. Actually, culture, religion, economics, manufacturing abilities, and the natural environment are linked with the problem of keeping the Tibetan Language alive, which is complicated. Nevertheless, it is vital for a nation to maintain and cultivate its culture depending on language, especially Tibetan, through its cultural identity in China. School education cannot grow in a certain way unless solving the language dilemma.

According to Wang (2009, p. 68) “Trade was another major resource of the monastic economy. Because of their important position in Tibetan society, monasteries not only housed monks, but also many lay people who visit regularly for religious purposes. Therefore, monasteries were centers of religious activities and trade. ” Monasteries usually represent the traditional Tibetan culture, in the time when the Tibetan language was leading the society and economy.

Moreover, peasants and nomads generally work on the monasteries’ land but no salary and they generally barter for meat and butter with grain in autumn and winter, when countrymen have taken in their crops along with the finest quality of animals (Wang, 2009,p. 72). In modern Tibet, the Tibetan language is gradually replaced by Chinese in society, at the same time, the traditional economy is changing because of the transformation of language. Since China’s government has implemented the bilingual education policy, establishing many private and public schools for poor Tibetan, the condition of peasants and nomads are shifted.

Hence, the new policy created a chance for children who born in a peasant and nomad family, who are not bound to monasteries land any more. With the enlargement of tourism, backpackers would like to walk in remote places, many peasants and nomads are able to establish their own business along with the growth of tourism, and benefit from the convenient transportation. The consistency of the Tibetan language ensured the completeness of the Tibetan culture and tradition. At present, with the development of tourism and transportation is bringing Tibet to the world.

Many intelligent Han Chinese, who come from big cities such as Chengdu, Beijing, Shanghai, Guangzhou would like to visit Lassa, communicating with Tibetan scholars and artists. Those Chinese have great passion about learning Tibet culture. ( C. E. C. C, 2003,p. 21) Right now, a lot of Tibetans fluent in Chinese and even can speak little English, at the same time, many tourists can speak Tibetan, and get to know the history and culture of Tibet. Countless tourists that flood to Tibet, somehow have a great impact on Tibetan culture and language.

Plenty of Tibetans no longer wear Tibetan robes instead of wearing sport shirt. It is obvious that tourism is a moving advertisement that helps transmit culture, giving opportunities to Tibetans to deliver their culture and language to the world, and to get to know different languages and cultures. As a result, under the global cultural exchange environment, if Tibetan wants to keep its ethnic identity, they must maintain the original and complete of Tibetan language. In 1987, Dalai Lama demonstrated that Tibet does not belong to China through the television and newspaper.

Tibet is not only fighting for the political independence but also for language. Actually, the bilingual education is not completely aimed to teach Chinese or Tibetan, which is more for separating the urban and rural Tibetans. Moreover, the bilingual education is creating a Tibetan – Chinese mixed language, which made people neither fluent in Tibetan or Chinese. Furthermore, the construction of transportation, booming economy, and developing tourism is possibly damaging the culture and language, the uniqueness and identity of Tibet is gradually appearing.

Therefore, a lot of Tibetans are not satisfied with the language and cultural condition, they fear that a transformation to socialism society will create a gap with traditional culture and the original language, in the future, this condition will lead them lose their ethnic identity. Language is the core of the ethnic identity. Language can represent the culture of a nation and the soul of the people. Without the Tibetan language, Tibet will lose its identity, it cannot be called Tibet anymore.

Moreover, the Tibetan language has a close relation to the economy, and mastering Tibetan is one of the important requirements for getting a good job in Tibet. The changing of educational pattern is caused by the alternation of language policy in Tibet. The bilingual education still cannot be trusted without pursing the function of the Tibetan language. Growing tourism and extending railway are bringing Tibet to global environment as well as giving a harsh trail for Tibet culture and language. Is there a new railway is going to pass through Tibet or there is no railway can penetrate Tibet?

The Relationship Between Language and Ethnic Identity : a Focus on Tibetan. (2016, Dec 24). Retrieved from https://studymoose.com/the-relationship-between-language-and-ethnic-identity-a-focus-on-tibetan-essay 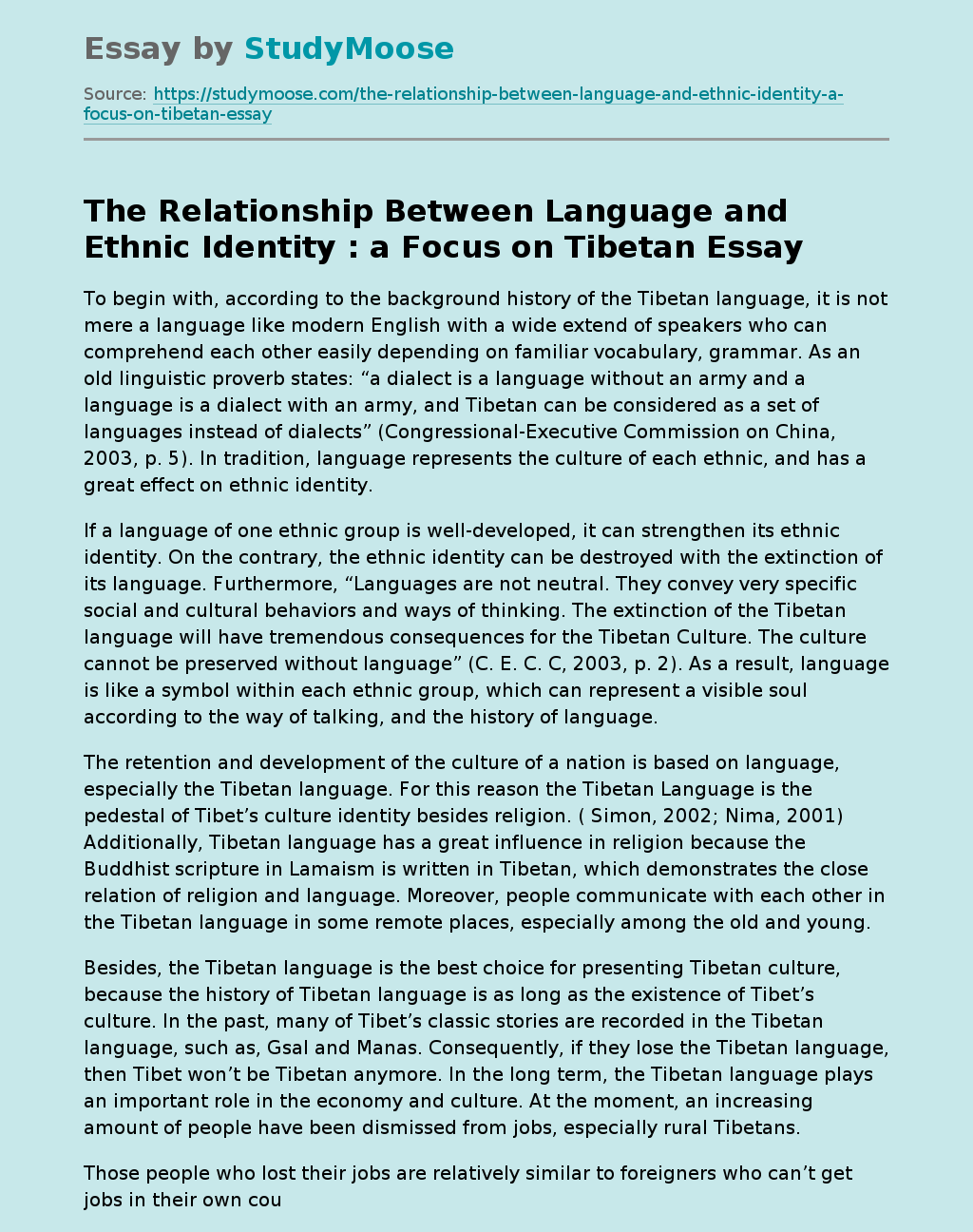