The Relation Between Wealth and Happiness

The articles The Sandra Bullock Trade and But Will It Make You Happier? both discuss the relation between wealth and happiness, and it doesn’t require much to figure out, that these articles agree that happiness doesn’t depend on wealth in general. But as The Sandra Bullock Trade nearly refuses any connection between the two and even states that “if you have an unsuccessful marriage (…) you will remain significantly unfulfilled” (p. 2), But Will It Make You Happier? points out that even though happiness isn’t dependent on income, your buys will influence your mood.

Don't use plagiarized sources.
Get Your Custom Essay on The Relation Between Wealth and Happiness Just from $13,9/Page

The Sandra Bullock Trade acknowledges that poor people are generally unhappier, but the article also claims that as long as your basic needs are fulfilled, money makes no difference. This is probably the biggest disagreement between the articles, as But Will It Make You Happier? is somewhat more capable of differentiating the dilemma. Instead of just having a one-tack mind, the article focuses on both the pleasure that money can bring, but it also declares how we are more likely to find joy when we buy social activities than when we buy material objects.

The Sandra Bullock Trade catches your attention from the very beginning. The headline itself makes you want to read it, because a celebrity like Sandra Bullock is a person that will instantly catch your attention whether you want her to or not. Another means, which The Sandra Bullock Trade uses, is to turn directly to the reader, and in the sentence “Nonetheless, if you had to take more than three second to think about this question, you are absolutely crazy” (p. 2), the article does so. The article asks the reader whether he would “(…) exchange a tremendous professional triumph for a severe personal blow?” (p. 2), and hereby it is not only making the reader think, but it also forces the reader to consider his own life. The link between the reader’s life and the article makes it difficult to stop reading, contemporary with bringing a new significance to The Sandra Bullock Trade.

Besides of the above-mentioned means, The Sandra Bullock Trade expresses a curtain criticism against the general way of grasping life and the school system by saying that “Most schools and colleges spend too much time preparing students for careers and not enough to make social decisions” (p. 3) This controversial statement, which might be slightly exaggerated, prepares the ground for a debate, which is an important component of an interesting article, and the exaggeration help holding on to the reader as well. Last but not least, the deliberate choice of words and the substantiation of the statements of the article contribute to engage the reader.

Even though his long work hours have caused him to be more stressed and in a worse mood than others, he is now experiencing a satisfaction that has been worth the waiting time. With the point of this example being that a temporarily good mood can’t lead to a greater happiness, Happiness, Money and Giving It Away denies that spending makes you into a happy person, and contradicts But Will It Make You Happier?’s statement, saying that as long as you don’t compare your own purchases with other’s, using your money will to some extent make you happier.

So, a great income and using your money on social activities will make you momentarily happy. But to feel real happiness, you should find a more meaningful activity.

The Relation Between Wealth and Happiness. (2016, Apr 30). Retrieved from https://studymoose.com/the-relation-between-wealth-and-happiness-essay 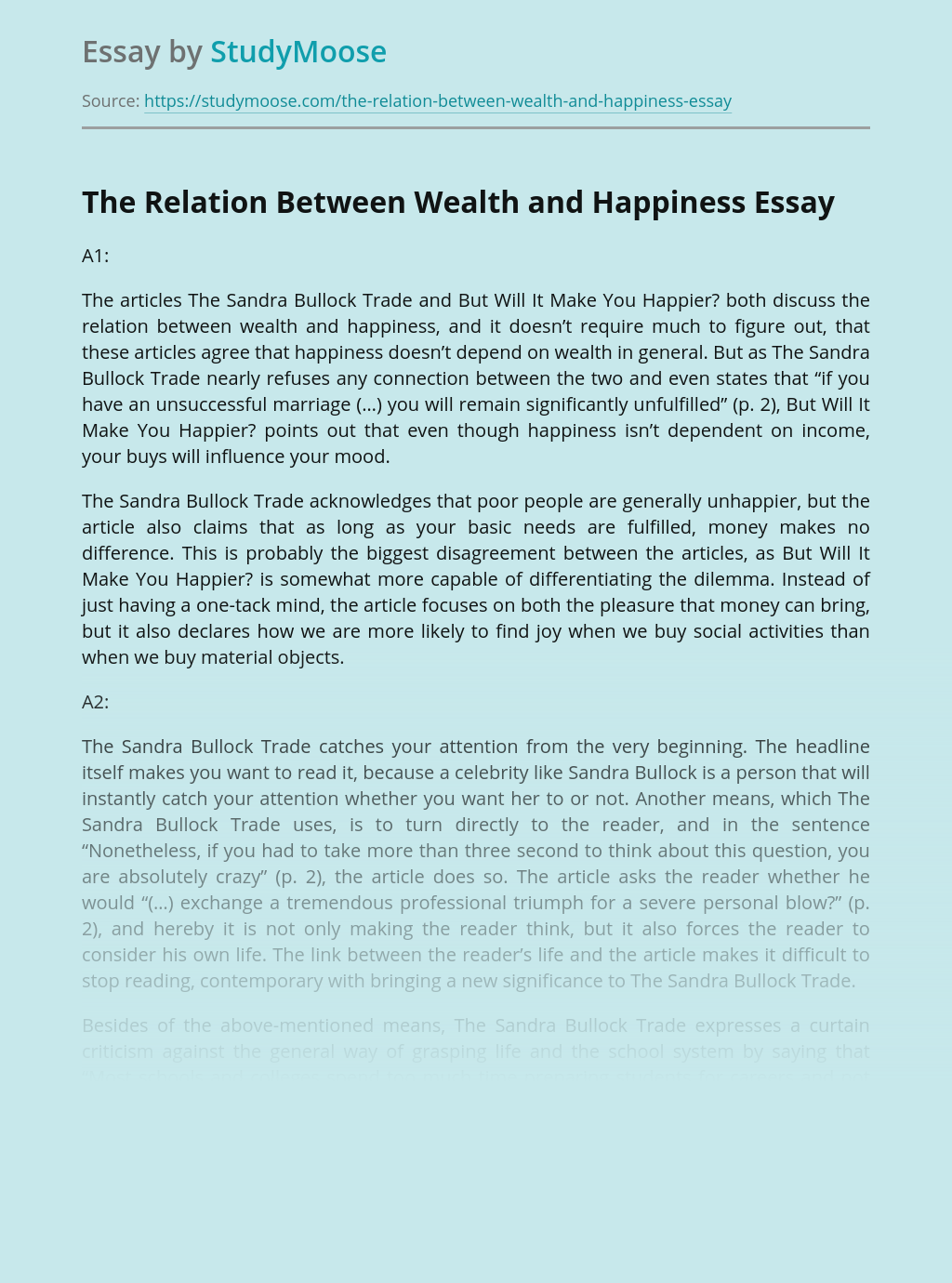 A Poem and a Song Richard Cory Comparison

Rate this post “Richard Cory” describes how one man is not as perfect as his townspeople think. The poem “Richard Cory” was written in 1897 by Edwin Arlington Robinson. It is about a gentleman by the name of Richard Cory; a man everybody admired. The townspeople look at him as if he had it all....

The Pursuit of Happiness

Rate this post Everyone’s lives are dependant upon the goals that they set for themselves. When one attains their goals it gives them pleasure and satisfaction, but so does the pursuit of their desires. While one is pursuing a goal, one is imagining the pleasure of attaining it. Once they achieve the goal, the pleasure...

Get Essay
A Good Career Is the Key to Happiness

Rate this post In today’s modern world, many people are looking for a great career and happiness. Happiness is hard to understand that it depends on people. Many people now think a good career is the key to happiness. However, others hold a different stance. I agree with both sides of the argument to some...

Health and Impact of Unhappiness

Rate this post Try to take a look at the people around you. How many people that you see that are happy? How many of them that are looked unhappy, sad, depressed, and not enjoying life? What happen to those people? Why do so many people feel unhappy? As according to Chernoff “There are many...

Money Can Not Buy Happiness

Rate this post Do you believe that your income is the main factor in determining your happiness? It is a classic debate that has reached its tentacles into the minds of our nation’s individuals and wrapped itself firmly around their minds having them strive for happiness. Money does not buy happiness. Too many Americans are...

If Money doesn't Make You Happy; Then Your Not Spending It Right Critique

Rate this post The belief that money lead to ultimate happiness was circulated among mankind and perceived as the essence of life, this can be seen in the quote: “Money makes the world go round”. Upon reading this quote , one begins to think that money is the everlasting physical material that brings happiness. However,...

Rate this post The learned Viktor Frankl contends that “chance decides what happens but we decide how to take it” (cited in Southwick, et. al. , 2006, p. 162). For someone who has been through the most tragic circumstances of human existence, Frankl is surely someone who knows pretty well how happiness is to be...