The Refugee in European Union

The influx of refugees and immigrants across the European borders in the year 2015 was seen by others as a foreseeable crisis that was contributed by improper implementation of the EU immigration policies. The signs of this crisis were significant in 2013, when the governments were cautioned of the large inflows and loss of live on the Mediterranean Sea. In as much as the effects of this inflow was felt Italy, it was a significant warning of the crisis ahead. The situation blew out of proportion in 2015, when the flows from Turkey to Greece increased tremendously, and more movements were experienced through the Wester Balkans and spread to other EU member states.

Don't use plagiarized sources. Get your custom essay on
“ The Refugee in European Union ”
Get custom paper
NEW! smart matching with writer

At this point the relevant authorities were greatly struggling to cope up with the situation, from border control to humanitarian services.

People may leave their country of origin to settle in another, these people are treated in a special way that legal practices define that restricts them from being part of another nation state.

The rate at which persons are being displaced from their countries of origin is increasing over the previous years. In 2015 the highest number of people have been displaced I the world since the last world war (Herwig, 2016). The huge number of refugees seem to be a menace on the side of European Union. In just a year (2015), over a million refugees have been reported to have moved from North Africa to the European Union across the Mediterranean Sea. The large numbers of refugees lead to the announcement of refugee crisis in the EU.

The EU came up with the Resettlement and Relocation Program that would see the members of the union accept a certain number of refugees based on the agreed terms. Those who risked their lives by crossing the see were however exempted from such programs.

There are several proposed solutions to try and solve this crisis that is being experienced in the European Union. Each member of the European Union should actively involve themselves in solving the crisis by creating a new approach since the Dublin system seems to have failed. The union should make sure that each member state fulfills its first reception responsibilities thus preventing the refugees from moving to other states so as to live better. The EU can come up with an agreement that would define the sharing the reception of refugees in a manner that is just to both the refugee and the member states to ensure that the states commit to fully be responsible for hosting the refugees.

The Refugee in European Union. (2020, May 21). Retrieved from http://studymoose.com/the-refugee-in-european-union-essay 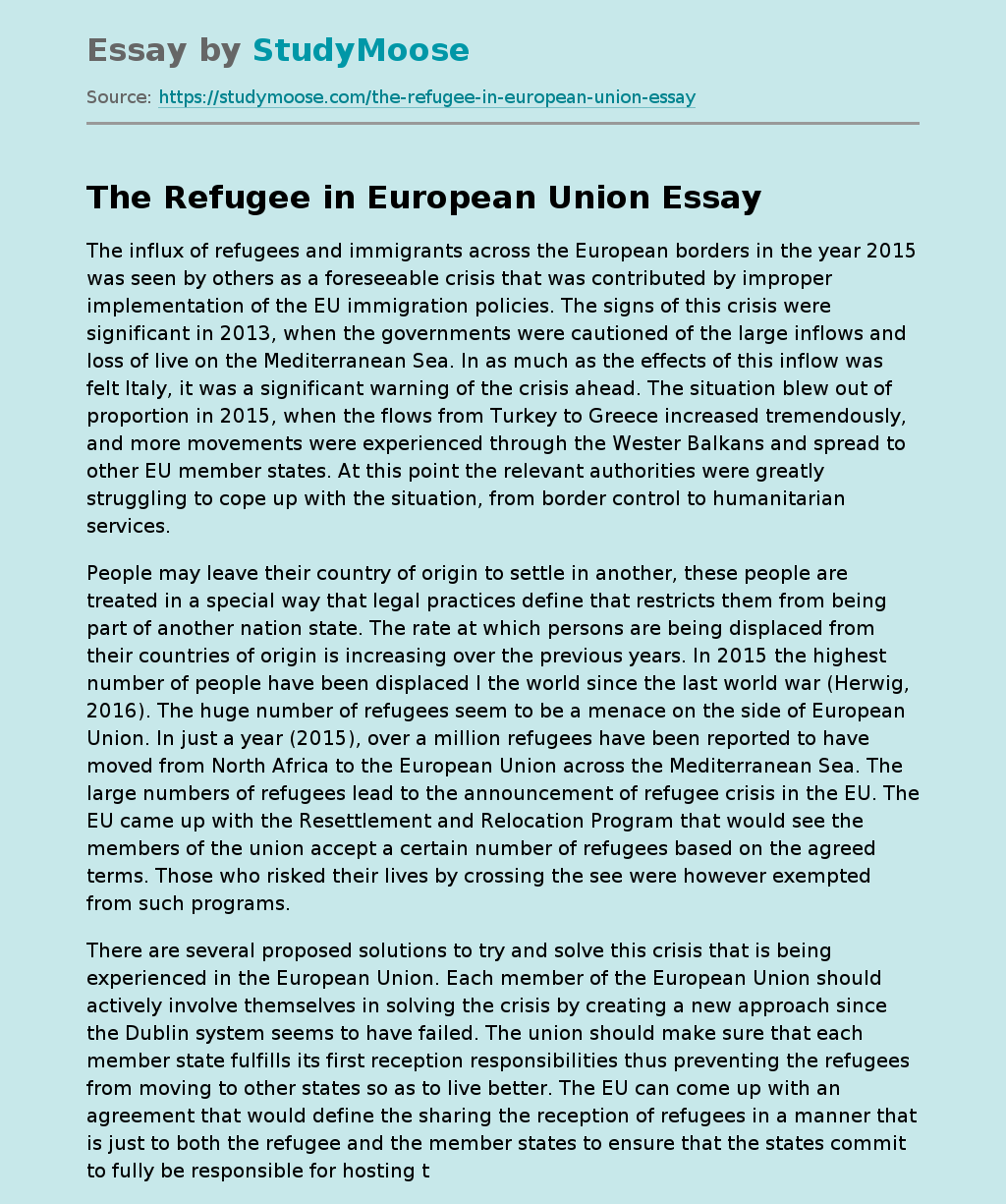