The Red Dress by Alice Munro

Throughout life there is always one person who influences you, impacts your decisions and aids you in your struggle for identity. It is of no importance whether or not that person is male or female, friend or family, younger or older. In the story The Red Dress by Alice Munro, the character Mary Fortune represents this individual; this influence. The main character in the narrative, who remains nameless, is only able to discover herself through the help of another. Mary Fortune instilled a sense of confidence in the main character by presenting her a path that lead away from the majority.

Turn in your highest-quality paper
Get a qualified writer to help you with
“ The Red Dress by Alice Munro ”
Get high-quality paper
NEW! AI matching with writer

The girl experiences a profound life altering change in the story. At the beginning of the story the girl is portrayed as an unsocial, insecure individual and an outcast in society. She fails to interact with any characters in the story, even those closest to her, (i.e. her mother, her peers, and her best friend). She is unable to express any emotion or opinion on any subject matter, even when it directly concerned her.

Her lack of self-confidence and self-esteem holds her back from living life they way she pleases, forcing her to live a life others think best for her.

An example of when she lives a life defined by others is with the red dress her mother is making for her. The girl hates the red dress but does not express her sentiments to her mother. Her mother always wanted a red dress made for her as a young girl, and therefore assumes it was what her daughter, the girl, wished also.

“Now, grown wiser, I wished for dresses like those my friend Lonnie had, bought at Beale’s store.”

From the quotations above, we can conclude that the main character does not wish to wear the red dress. Her lack of confidence and insecurity causes her to follow along with her mother’s desires rather than her own. The red dress is a symbol of a life other than her own, depicted by her peers and parents. The main character is trapped in a world of strangers and unhappiness when she wears the red dress. A world foreign from her own desires and views in life. However, the girl never tries to escape this world. She never expresses her difference of opinion and is a slave to the dress and even her own life.

Just as the red dress imprisons the girl, school is another captivation for her. She is at a constant state of unease and paranoia in this environment. Her insecurity that lies within herself forces her to view school as a torture chamber.

“At high school I was never comfortable for a minute…When I had to go to the blackboard I was sure – even at a time of month when this could not be true – that I had blood on my skirt.”

Communication is an essential skill in the 21st century. Anyone who does not possess this skill will not be able to get very far. Since the girl finds herself unable to interact with her peers, it is difficult for her to communicate with the rest of society, (i.e. her mother and classmates). The only friend she makes is Lonnie, and even then she finds herself unable to be completely honest and fully communicate with her.

“We had made a pact to tell each other everything. But one thing I did not tell was about this dance, the high school Christmas Dance for which my mother was making me a dress. It was that I did not want to go.”

This quotation displays the lack of interaction skills the girl possesses. She cannot convey her feelings to the sole person she trusts. In fact, she is so frightened of confronting and disagreeing with others, she deliberately attempts to sicken and injure herself to escape the distraught situation.

“Formerly I had considered falling off my bicycle and spraining my ankle and I had tried to manage this, as I rode home along the hard-frozen, deeply rutted country roads. But it was too difficult…I started getting out of bed at night and opening my window a little. I knelt down and let the wind, sometimes stinging with snow, rush in around my bared throat. I took off my pajama top. I said to myself the words “blue with cold” and as I knelt there, my eyes shut, I pictured my chest and throat turning blue, the cold, greyed blue of veins under the skin. I stayed until I could not stand it any more, and then I took a handful of snow from the windowsill and smeared it all over my chest, before I buttoned my pajamas.”

Alice Munro conveys the girl as being an extremely insecure, shy and frightened individual. We are able to view these traits at their greatest at the school dance. The first guy that the main character finds herself dancing with is the popular Manson Williams. However, her nervousness and lack of confidence leads her hands to shake and her to stumble all over the dance floor. In fact, she is so uncomfortably nerve-racking that Manson leaves her on the edge of the floor alone.

“He took his hand from my waist and dropped my arm. ‘See you’ he said. He walked away.”

Since the girl is not confident about herself, she is unable to be at ease around others, especially those of the opposite sex. Her discomfort actually makes the people in her presence feel apprehensive. Due to this, she views herself as a loser and an exile, (see quotation below), one of the reasons why she dislikes school and social events. Her apprehensiveness makes her body shut down and unable to function.

“I myself was not angry or surprised at Manson; I accepted his position, and mine, in the world of school and I saw that what he had done was the realistic thing to do. He was a Natural Hero…”

After the girl’s encounter with Mary Fortune in the bathroom, her attitude towards the dance and life altogether changes. She no longer feels obliged to dance with someone and no longer attempts to make herself more attractive to gain the “pleasure” of a dance. She finds a sense of self-acceptance and learns that being part of the norm does not necessarily mean dancing with a guy.

“I found that I was not so frightened, now that I had made up my mind to leave the dance behind. I was not waiting for anybody to choose me. I had my own plans. I did not have to smile or make signs for luck. It did not matter to me. I was on my way to have a hot chocolate, with my friend.”

Mary Fortune shows the girl a life of exile. Even though Mary is a “popular” girl at school, Mary is unhappy, and it is this unhappiness that forces the girl to change. In Mary the girl sees a confident, self-reliant individual. Mary is able to make her own decisions, something the main character is never capable of. At first the girl finds herself wanting to be like Mary, but later in the tale she admits that it was exactly what she did not want. Seeing Mary’s unhappiness even at the status of popularity is the push that the girl needs to gain a sense of self-confidence.

“Then he turned back to town, never knowing he had been my rescuer, that he had brought me from Mary Fortune’s territory into the ordinary world.”

After the main character’s encounter with Mary Fortune, she decides to leave the dance and grab a hot chocolate with her new friend. Ironically when she decides to leave the dance she finds herself dancing with Raymond Bolting. This time however, she is confident and assured of herself. She is no longer sweating, stumbling or straining and she soon finds herself in the middle of the floor dancing flawlessly. It is only when the girl realizes her potential that she is able to be comfortable with herself and therefore with others, (i.e. Raymond).

“We moved to the middle of the floor. I was dancing. My legs had forgotten to tremble and my hands to sweat.”

Raymond and the girl find themselves dancing all night and when it comes time, walking home together. Even though the conversation is more of a one-sided one, the girl still accomplishes much. She even gains the courage to offer Raymond a Kleenex, (he was sniffling).

“I didn’t know whether to offer it to him or not, but he sniffled so loudly that I finally said, ‘I jus have this one Kleenex, it probably isn’t even clean, it probably has ink on it. But if I was to tear it in half we’d each have something.”

This gesture of offering Raymond a tissue displays the girl’s ability to make her own decisions and take risks in life. Raymond’s acceptance of the Kleenex is a sign of acceptance in society, amongst other, and within herself. The struggle of whether to offer the tissue or not is much similar to the decision the girl made about going for hot chocolate or dancing with Raymond. If she had not offered the tissue, she would have been an outcast in society. It is this struggle which determined her destiny.

Mary Fortune is the sole character that allows the girl to gain a sense of self-actualization and confidence. She challenges the girl’s morals, and forces her to make decisions. She is able to express her views, and is able to live a life of her own only after her encounter with Mary Fortune. Without Mary Fortune the girl would never have found herself and realized the power of judgment. The girl learns that self-expression is a form of self-acceptance and with the help of Mary Fortune the girl is finally able to strip herself of the red dress.

The Red Dress by Alice Munro. (2016, Jul 06). Retrieved from https://studymoose.com/the-red-dress-by-alice-munro-essay 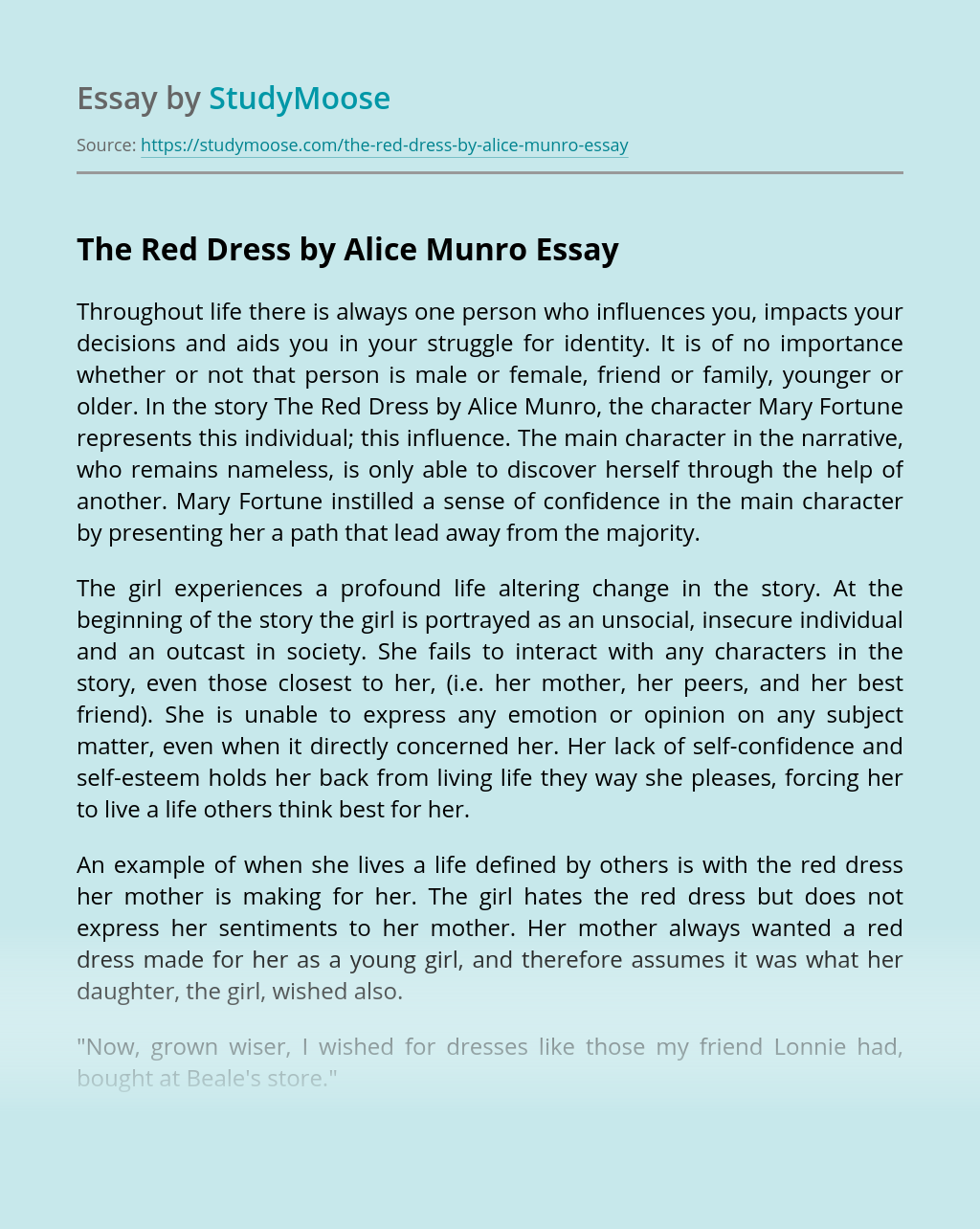 Turn in your highest-quality paper
Get a qualified writer to help you with
“ The Red Dress by Alice Munro ”
Get high-quality paper
Helping students since 2015
Stay Safe, Stay Original