`The Red Convertible` by Louise Erdrich

Louise Erdrich’s story entitled “the Red Convertible” is a depiction of brotherhood and selfless love. Lyman and Henry as the protagonists in the story illustrated the life of being an individual with a set of notion towards their dependence to one another. The author described the differences and similarities of the two characters as they took their journey in the wild. Despite of their differences, they have built a bond that is undeniable and unpredictable. It shows that their foundation as brothers is unbreakable by anyone.

Don't use plagiarized sources. Get your custom essay on
“ `The Red Convertible` by Louise Erdrich ”
Get custom paper
NEW! smart matching with writer

The beginning of the story is a symbolization of brotherhood and truth that lies within the struggle and personal justification of thought and ideology. However, as the ending of the story developed, the protagonists’ characterization twisted and created an opposite signification of life. It shows that the character of Henry really loves the character of Lyman because before he went to the river, Henry wanted Lyman to be as happy as he could while he ride at the convertible.

Upon establishing the characters, the author already stated the conflict that was seen in the sociological perspective of the protagonists. Because the two characters strived hard to obtain what they wanted, they have also built their own pride and capabilities as individuals that are unattached to the society’s dictation. By way of seeking the characterization of the two protagonists, the author used different elements and literary images to justify the claims and arguments in the whole narrative.

The author is fond of using the color of red in the story.

The color of the convertible is red as well as the river and the blood that runs within Lyman’s face. Depending on the situation and context of usage of the color, the red color signifies different forms of symbolizations. The red convertible symbolizes the life of Henry. It shows that while Henry is away, the convertible is in need of repair.

When Henry comes back from the military service, the convertible becomes fine and would be able to travel again. The convertible is also moody when it comes to Lyman like the character of Henry. Its being red is a signification of love and fire within the heart of Henry towards his brother Lyman. Henry wanted Lyman to take care of the convertible like the way he took care of Henry. Henry felt that Lyman is having a hard time understanding Henry’s incapability and mood swings that is why he decided to kill himself.

Another symbolism that occurs in the story is the river where the brothers went through. It is also a symbolization that is connected to Henry’s characters that is seemed to be deep and quiet but full of anxieties and rejections within his own self. Lyman on the other hand brought a television for his family. The television is a symbolization of picture. It celebrated the life of the two characters but Henry broke the chain of celebration. It means that despite of Lyman’s struggle, Henry will burn the fire of brotherhood and would not mend it again.

When it comes to word usage, the character did not use technical or highfaluting terms to state the arguments of the two characters. It goes with the flow of casual words as it depicts the character’s mind and actions. The ending of the story is somehow a tragic complexity of Lyman because he could not able to retrieve his brother whom he always repossesses despite of its unjustified actions and personality after the military service. It shows that Lyman surrendered because he could not able to change his brother back from the old Henry that he used to have.

`The Red Convertible` by Louise Erdrich. (2017, Mar 24). Retrieved from https://studymoose.com/the-red-convertible-by-louise-erdrich-essay 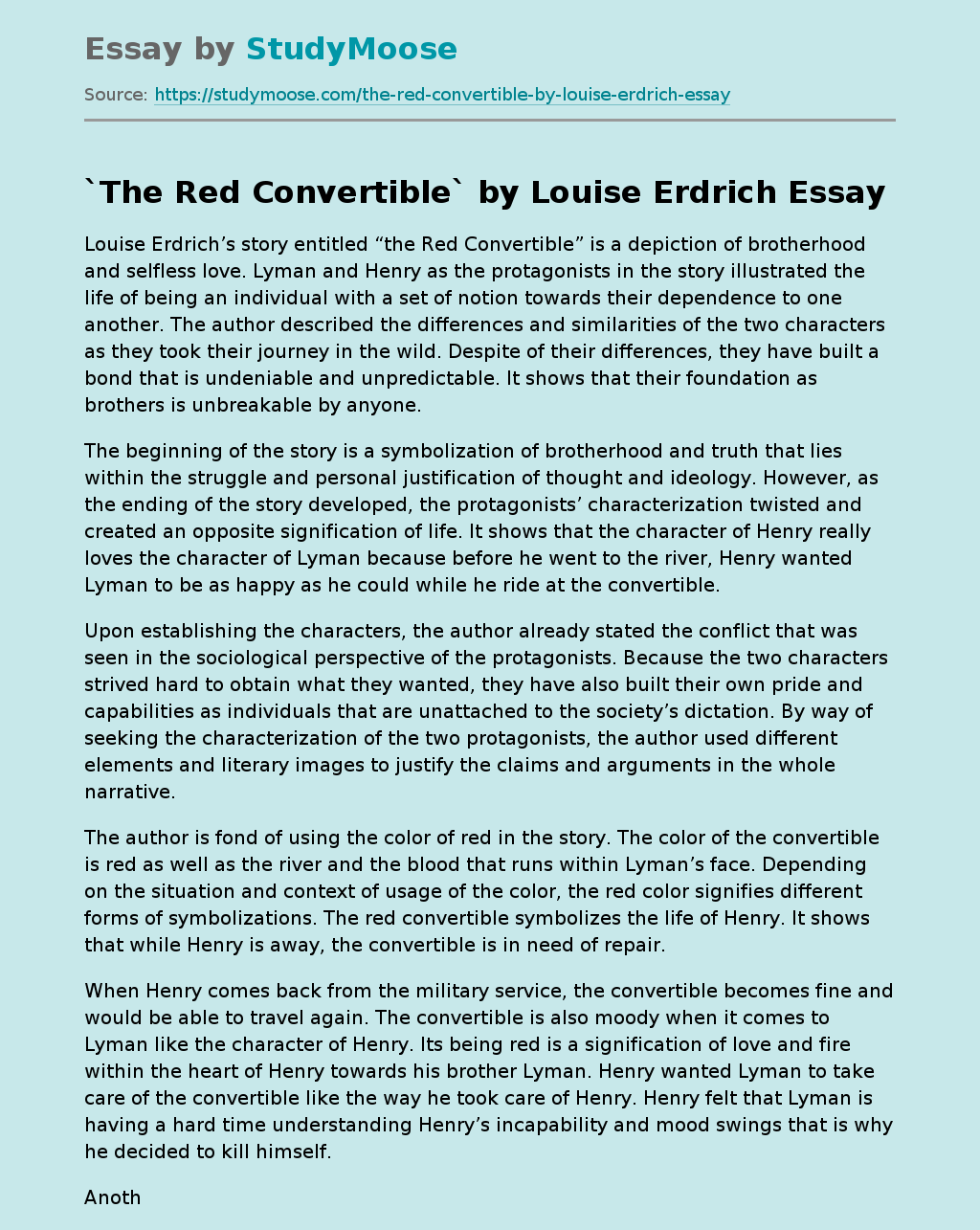