The Reality of Discrimination against Women in Schools and the Workplace

Because the Civil Rights Act of 1964 legally protects females against discrimination, and 2/3 of current college graduates are women, previous movements seeking equal rights for women have obviously succeeded in some respects (National Center for Education Statistics). However, college degrees and laws cannot change the mindset engraved into the population for generations. Ask college-aged males what they think of a woman who has multiple sex partners and a male with an equivalent number; guaranteed, the majority of the men will label the male as a champion and the female as a “slut.

Don't use plagiarized sources. Get your custom essay on
“ The Reality of Discrimination against Women in Schools and the Workplace ”
Get custom paper
NEW! smart matching with writer

” This harsh judgment of females starts at a young age. Think of the term “hit like a girl.” Essentially, the phrase claims that girls are inept, in that context, when compared to males. Society holds different expectations for males and females, especially concerning career and sexual matters. Girls are typically expected to be “pure,” proper ladies, yet men want a “promiscuous” girl to get what they desire. Expectations such as this confuse young girls who are often underwhelmed with facts and overwhelmed with pressure.

Proficient in: Gender Discrimination In The Workplace

Labels, double standards, and harsh judgment have greatly contributed to the presence of self loathing, inhibition, workplace stigmas, and career distractions among the female population. The concept of women being judged harshly and demonized for the same behaviors that men are praised for is nothing new.

In his essay, “Letter to M. D’Alembert on Spectacles,” political philosopher Jean-Jacque Rousseau notes that women are not suited for the nature of politics. He states that a dynamic, powerful speaker of a woman would be looked upon as a crazy witch, whereas a forceful, eloquent man would be seen as a strong leader (Rousseau).

Today, female politicians exist everywhere from Liberia to the United States. Nevertheless, men still drastically outnumber women in the political science field and in leadership roles. At a college with a nearly 70% female student body, my political science class contains but three women (including myself). Including the professor, males have the females outnumbered 20:3. The scrutiny and double standards women in fields like political science and business face maintain these unbalanced ratios. In terms of leadership and authority positions, non-profit organization, Catalyst, claims that women are “damned if [they] do and damned if they don’t” (Ibarra). Head of the IMF, Christine Lagarde, recalls a female leader who, in the name of fiscal responsibility, traveled with five cars opposed to the 25 that her male predecessors used. Citizens criticized her conservative car use and claimed that she lacked the power and force of the male leaders. In response, the leader claimed that if she used 25, she would be labeled as a showoff and wasteful spender. Facebook C.0.0. Sheryl Sandberg states, “Women are perceived as too soft or too tough but never just right, as competent or likeable, but rarely both” (Ibarra).

Catalyst has found that “women are evaluated against a masculine standard of leadership that leaves them with limited options and distracts attention from the task at hand” (Ibarra). The few women that manage to meet these standards and reach high positions in business or politics often face disrupting stigmas, stereotypes. Females are forced to worry about the world’s perception of them. As illustrated by movies, magazine, and advertisements, society puts an emphasis on a female’s appearance and behavior. This pressure is only magnified for women in leadership roles. They way female leaders talk and dress, their leadership style, their “executive presence,” their public image, and how they “fill a room” are under constant scrutiny (Ibarra). All of these concerns only distract leaders from their jobs. The masculine standards that they must deal with detract from their accomplishments.

Moreover, they make these fields unappealing to women who fear losing some of their more feminine qualities. Females who do not want to be looked upon as a woman with “sharpe elbows” have no hope in achieving high leadership positions (Ibarra). Their concerns over having a bold, unlikeable image will either prevent them from attempting to attain these roles, or cause them to soften their disposition so that they cannot command attention or properly fulfill the leadership position. Just as stigmas in politics have existed for centuries, so have double standards concerning human sexuality. Psychologists Yvonne Lai and Michaela Hynie state, “according to the North American sexual double standard, men and women’s sexual behaviors are governed by different rules” (Lai and Hynie). These rules have evolved over time, but the concept remains. In an older form of the double standard, women were expected to remain pure and virginal until marriage, while men were allowed to “sew their wild oats.”

Today, this is replaced by the notion that men are free to obtain many sexual partners, while women should be monogamous. These standards come about as a belief that sex is something men always want and need, whereas for women, it means achieving a loving, monogamous relationship (Lai and Hynie). Pop culture reinforces these “rules of sexuality” by criticizing those who deviate from the “standard.” A study analyzing prime time TV content discovered that shows featuring characters ages 12-22 revealed more negative consequences in scenes where females initiated sexual activities than in scenes where males were the initiators (Lai and Hynie). Furthermore, examination of modern sex-education films revealed different messages regarding male and female sexuality. Men’s desires were legitimized and considered normative while women’s were minimized and portrayed as a front for the desire to initiate an affectionate relationship (Lai and Hynie). When a woman attempts to defy these varying expectations, she becomes ostracized and labeled.

Women bear tangible consequences of discrimination in the workplace, but double standards in the arena of sexuality tend to leave more psychological damage. In one study by Jackson and Cram, test subjects were asked to label and judge male and female sexual histories and acts. The study showed that the same type of behavior that earned a woman the label of “slut” had earned a man the title of “stud” (Lyons et. al.). At first, these results seem obvious and uninteresting; however, the fascinating and more informative part of this study lies in the fact that all participates were late adolescent girls. Women have to worry not only about judgments from males, but also, their fellow females. Some may think a strong woman could brush off the labels and name-calling; however, the judgments that come with defying sexual expectations result in a ripple of physiologically damaging effects.

Recently, Kreager and Staff, drawing on data from the National Longitudinal Study of Adolescent Health (Add Health), found that women with many sex partners report fewer friends. This association did not reign true for male respondents (Lyons et. al.). Essentially this study states that “… [women] who [have) a relatively high number of sex partners [are) less popular than their more sexually conservative counterparts, and may suffer from low self-esteem that is associated with internalizing the negative views of others” (Lyons et. al.). The same levels of sexual acts that earn males praise earn females reprimand, self-esteem issues, and a companionship deficiency. Though most people recognize the double standard, few realize the effects they have.

Women lose friends and self-esteem when they are labeled as a “slut.” They also lose interest in business and politics when they are forced to masculate themselves to succeed. Moreover, girls are not taught how to deal with these expectations. In my household, talking about these issues, like double standards in leadership and sexual activity, was essentially taboo. Perhaps my parents believe that if the topics were not discussed with me, they did not exist to me. Nevertheless, this only supports the notion that unlike men, women are expected to behave in a proper, calm, and chaste manner. If they rebel against these unbalanced expectations, they risk receiving damaging labels.

The Reality of Discrimination against Women in Schools and the Workplace. (2021, Sep 30). Retrieved from https://studymoose.com/the-reality-of-discrimination-against-women-in-schools-and-the-workplace-essay 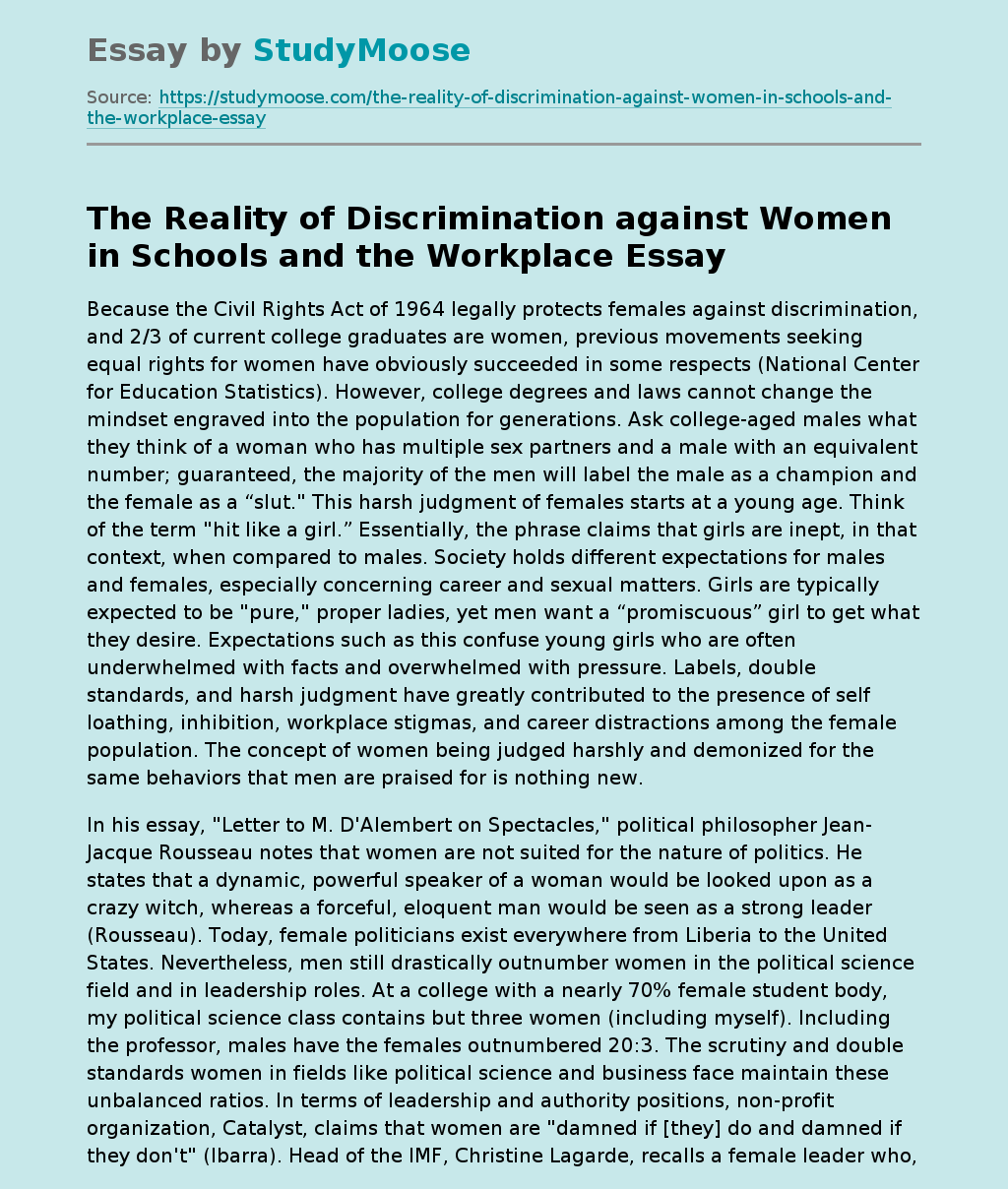