The Progressive Movement: Which Reform Was Most Successful?

Though the progressives were successful in several areas, exposing corruption was their greatest success. The results of this led to the revealing frauds, unfair business practices, bribery, and many other unlawful practices. Because the progressives had exposed so much corruption, average citizens would soon have the benefit of cleaner work conditions, higher wages, less voter intimidation, and safer goods for sale.

The progressives exposed much of the corruption that existed between business and politics. Businesses usually paid off politicians to prevent the passing of laws that could ruin profits.

Don’t waste time
Get a verified expert to help you with The Progressive Movement: Which Reform Was Most Successful?
Hire verified expert
$35.80 for a 2-page paper

They also bribed government inspectors so that they would not even check anything out and they would report back to the government saying that all is swell. The muckrakers finally exposed this corruption, and soon the public was made more aware of these things. This led to better conditions in factories because politicians started actually doing their jobs.

At that time, many people in politics were extremely corrupt, which caused problems for many.

For a very long time, companies had been selling unmarked products. No one had any clue whatsoever what was in the products, and half the time, the products either made people ill, or just plain did not do what the companies claimed they did.

Various ‘miracle cures’ and medicines did absolutely nothing, and some were too powerful and dangerous, often harming people. When factories began to clean up the workplaces and improve working conditions, goods became safer to consume. After the Pure Food and Drug Act was passed by President Theodore Roosevelt in 1906, food had to be inspected and labels containing a list of ingredients had to be placed on each product. This led to safer food and, as a result, a healthier community.

The progressives excelled in exposing corruption and unfair business practices. They were more successful in this area than any of the others. Because of their hard work, we now live in a safer, healthier, happier society.

The Progressive Movement: Which Reform Was Most Successful?. (2016, Dec 12). Retrieved from http://studymoose.com/the-progressive-movement-which-reform-was-most-successful-essay 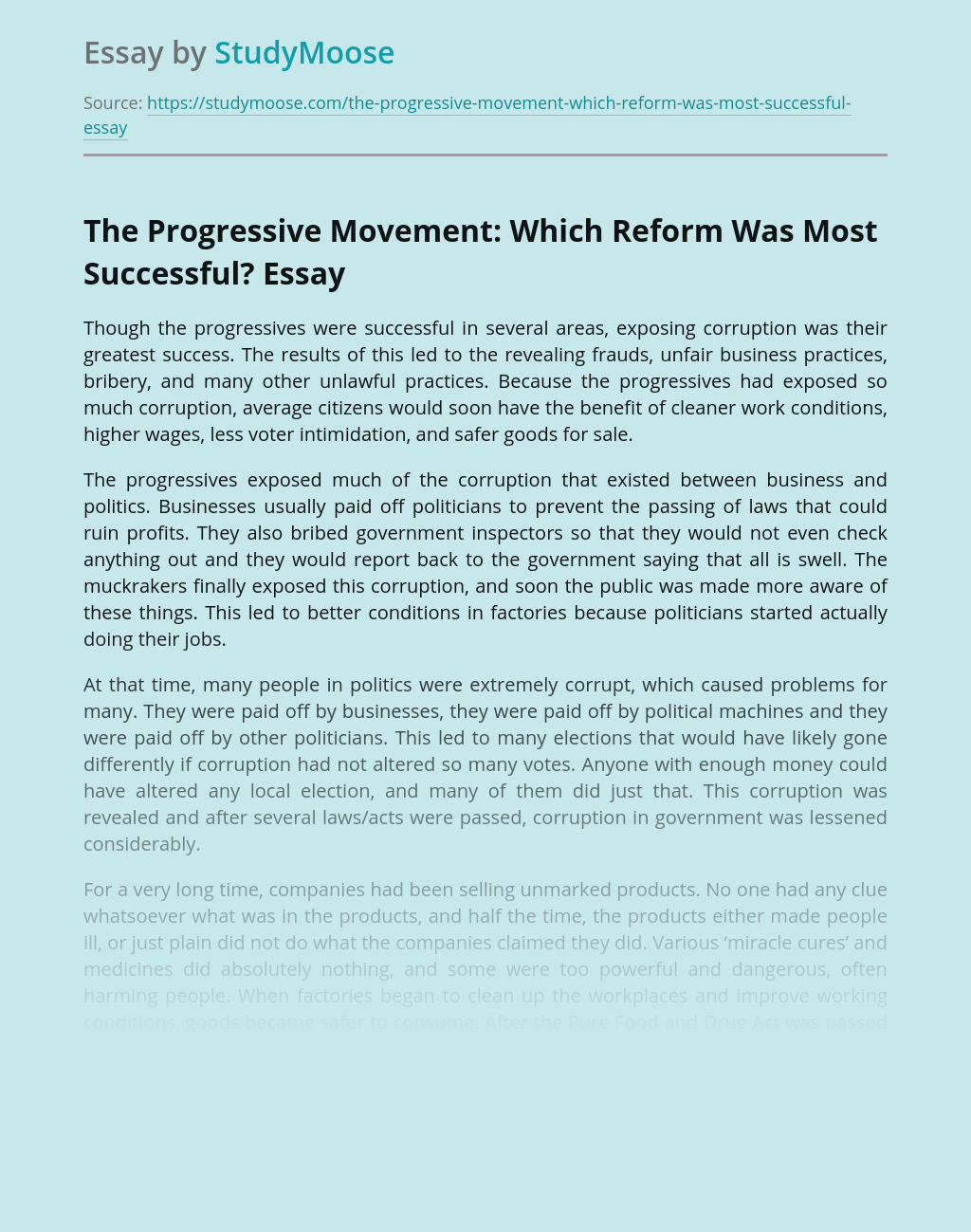 Don’t waste time
Get a verified expert to help you with The Progressive Movement: Which Reform Was Most Successful?
Hire verified expert
$35.80 for a 2-page paper
Stay Safe, Stay Original