The procedure of discounting and collecting Hindies

Commercial Bill, which had its origin in Europe is an early medieval financial innovation evolved over centuries – from a personal bond executed by debtor before a Court or a public notary to its present form of a commercial financial instrument – acquiring at various stages of evolution its distinctive characteristics of easy transferability and negotiability, and thus lending itself to discounting by banks to provide liquidity to the holder.

Don't use plagiarized sources. Get your custom essay on
“ The procedure of discounting and collecting Hindies ”
Get custom paper
NEW! smart matching with writer

In India, too, indigenous bankers and other business houses have been historically using some kind of Bill-like instruments written in vernacular languages, known as ‘Hundies’ in their many variants to pay and receive the value of goods exchanged in the course of trade. However, with the development of organised financial markets over the years, and the spread of commercial banking, the role of indigenous bankers in the financial system diminished in importance and Hundies too gradually started losing their status as the principal instrument of credit and were replaced by Bill of Exchange in its present form.

With the dominance of cash credit system in financing domestic trade and industry, Bill Finance, despite its inherent advantages from the point of view of the lending banker, has been relegated to play only a marginal role in the credit delivery system of the country. The need for the development of Bill culture among borrowers was stressed by the various committees, appointed by the Government of India and the Reserve Bank of India, while examining certain aspects pertaining to bank lending/ money market/ banking sector reforms.

These Committees had gone into depth as to the different aspects of working capital financing and stressed the need to promote the Bill culture, so as to inculcate a measure of financial discipline among borrowers.

As early as in 1931, the Indian Central Banking Enquiry Committee recommended the establishment of a market in commercial bills. Later, in 1937, an attempt was made by the RBI to bring in the indigenous bankers within the ambit of monetary control, by providing them the facility of re-discounting of their hundies, and granting of advances against the Government securities and remittance facilities similar to those enjoyed by the scheduled banks, provided the indigenous bankers shed their non-banking (mostly trading) business, maintained accounts in the prescribed manner and permitted inspection and audit of their accounts. In the year 1952, a formal attempt was made to create a Bill Market and the “Bill Market Scheme of 1952” (subsequently referred to as “the old Bill Market Scheme”) was introduced.

The scheme was in vogue for well over 18 years. However, it was the New Bill Market Scheme (NBMS) introduced by the Reserve Bank of India in November 1970 that provided some impetus to the development of Bill Market. Since the introduction of the New Bill market scheme, the RBI introduced several measures to encourage and widen the use of Bills such as, simplification of the rediscounting procedures, promotion of Drawee Bills Scheme, remission of Stamp duty on bills of exchange of three months tenor, selectively increasing the participants in Bill Rediscounting Market, setting up of the Discount and Finance House of India (DFHI), enabling multiple rediscounting of bills and delinking of prime lending rates of banks in respect of bill discounting facilities. Despite all these measures, bill financing has not so far taken off as the preferred mode of financing in any significant manne

Bill Financing, as stated earlier, has not been able to even partially substitute cash credit, despite the various Committees’ scholarly studies and erudite recommendations and constitutes less than 10% of the total bank credit. It is also pertinent to mention in this context that the loan system too, as one of the three alternative styles of credit delivery in domestic working capital funding, did not meet with any greater degree of success, which underscores the imperative need to revisit the current style of working capital funding. In this context, it would be pertinent to mention, that discounting of usance bills of exchange to finance domestic trade, as obtaining in our country, seems to be losing its relevance in most other countries.

In developed markets like U.K., USA, Europe, Australia, Germany, New Zealand etc., bill discounting facility, as a product, as commonly understood in India is not in use. 3.1 In India, the major reason cited for the non-development of bill financing is the hesitation of the industry and trade to subject themselves to the rigours of bill discipline. The Group recognizes that vendor payment discipline of a company is an indicator of the ethos of the management of the company and is sine-quo-non for the development of bill culture, which pre-supposes the willingness of trade and industry to subject themselves to the strict commitment to honour financial obligations on the contracted date.

Operational and procedural hassles currently obtaining in banking system too are said to impede the growth of bill financing even amongst those business segments where it has found acceptance. These apart, commercial transactions are now generally tending to be more in the nature of open account sales. With the spread of e-Commerce, this trend may get accentuated and there is also growing expectation from trade and industry for on-line completion of transactions.

The Group, under one of its terms of reference, also examined the role and scope of introducing ‘Banker’s Acceptance’ (BA) facility in the Indian Financial Markets. BA has been in use in markets like USA and Europe primarily in financing international trade. Historically, BA backed by Trade Bills had readily available discount windows like the Discount Houses in the U.K. and the Central Banks like the Bank of England and Fed Reserve.

BA is a time draft or bill of Exchange drawn on and “accepted” by a bank as its commitment to pay a third party. The parties involved in a banker’s acceptance are the Drawer (the bank’s customer – importer or exporter), the Acceptor (a bank or an Acceptance House), the Discounter (a bank which could be the accepting bank itself or a different bank or a discount house) and the Re-discounter (another bank, discount house or the Central Bank). A “BA” is accepted, when a Bank writes on the draft its agreement to pay it on maturity. The Bank becomes the primary obligator of the draft or bill of exchange drawn on and accepted by it. In effect, BA involves substituting bank’s creditworthiness for that of a borrower.

The accepted bill bears an irrevocable, unconditional guarantee of a bank to pay the bill on maturity, in the process creating a negotiable instrument that is also attractive to investors in short term paper. BA compared favourably as a funding avenue in terms of cost vis-à-vis LIBOR based loans. However, in the US market in recent years the popularity of BA has been on the wane due to a host of market developments, particularly the emergence of cost-effective instruments from borrower’s point of view like the asset-backed Commercial Paper and Euro-Commercial Paper and narrowing spreads between yields on Euro-dollar deposits and BA, leading to investor indifference between the two as the preferred investment avenue.

In some of the high-risk areas, traditional lending products, with fixed rates of interest may not be appropriate. Banks may have to come out with alternative financing option like convertible loans, conditional loans (part of the revenue may come by way of royalty on sales) etc. Such products may compensate adequately the lending banks for the additional risk which they may take in financing such high risk service oriented activities.

In some of the high-risk areas, traditional lending products, with fixed rates of interest may not be appropriate. Banks may have to come out with alternative financing option like convertible loans, conditional loans (part of the revenue may come by way of royalty on sales) etc. Such products may compensate adequately the lending banks for the additional risk which they may take in financing such high risk service oriented activities.

Having said this, the Group does not rule out the possibility of some segments in the Service Sector, still being amenable for Bill Finance, like software, particularly when there is an established relationship between service provider and user. Given the past record and the standing of the service provider, the user may not have hesitation in accepting the bill; so also, the service provider may be willing to extend credit to user of the services, based on his past track record of payment. For instance, when software companies undertake projects to develop various applications, the vendors draw export bills on the user of the application and banks discount bills since there is an underlying trade transaction.

Such projects are undertaken on a large scale and are often extended to new parties also. The Group, therefore, recommends that the services rendered/delivered by firms/companies engaged in services sector may be considered on the same footing as of sale of goods. Banks may be permitted to entertain purchase/discount of bills drawn by service providers on their debtors, subject to the satisfaction of the banker that the service has been rendered. The definition of a bill eligible for discounting be also suitably amended to include services rendered on par with bills arising from other trade related transactions.

The procedure of discounting and collecting Hindies. (2016, May 01). Retrieved from https://studymoose.com/the-procedure-of-discounting-and-collecting-hindies-essay 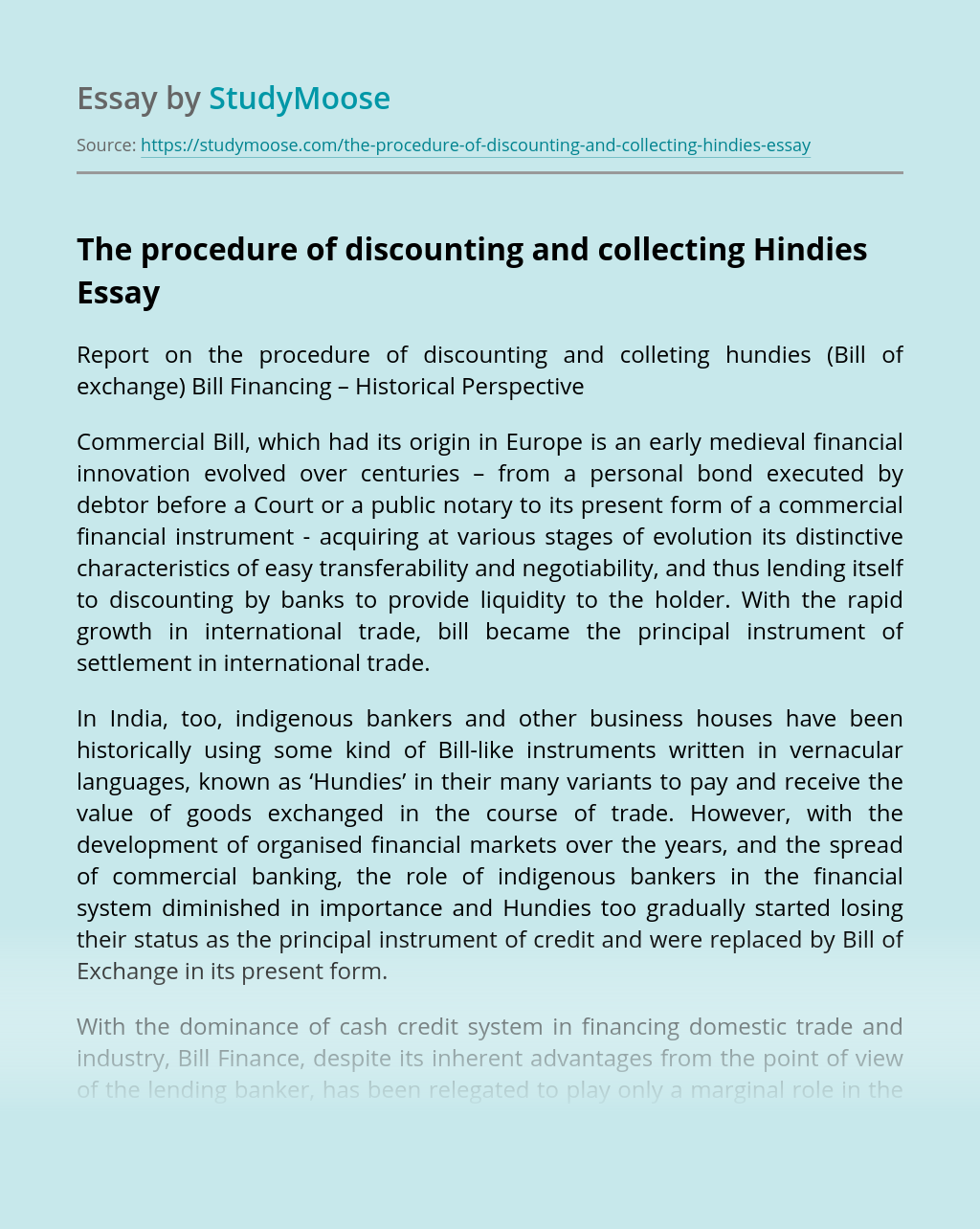