The Problems With the Death Penalty

The Death Penalty is a very diverse and well debated topic and all around the world it is used. Typically death penalty would only be used on people who commit very bad crimes and are not suitable for everyday life. Most say that The Death Penalty should only be charged to a person who killed someone therefore they lost their right to live when they killed the other person. However if we punish the wrong person and end up killing them then the state would be in trouble for killing the innocent person.

Don't use plagiarized sources. Get your custom essay on
“ The Problems With the Death Penalty ”
Get custom paper
NEW! smart matching with writer

The main people who are affected by The Death Penalty would have to be the person being put on death row because if you kill them harshly then they would suffer and the 8th amendment states that cruel and unusual punishment is illegal. The death penalty should not be a punishment because if you kill someone then you have done something illegal no matter what they did no one should kill because it goes against the ten commandments where it states thou shalt not kill.

A religious point of view can affect the topic of Death Penalty a lot since it does state you can not kill people otherwise you have broken one of the ten commandments and does not make the situation any better because everyone just keeps killing so there really is no justice to it. Finally the last reason that death penalty should not be legal is because it is not very punitive or punishing due to the fact they do not have to suffer or truly answer for their crimes there just getting killed.

Or said by David Zink an inmate who was executed ‘For those who remain on death row, understand that everyone is going to die. … Statistically speaking, we have a much easier death than most, so I encourage you to embrace it and celebrate our true liberation before society figures it out and condemns us to life without parole and we too will die a lingering death.’ which ultimately proves the point of why death penalty should be illegal.

The Death Penalty should be illegal, it is the worst form of punishment ever created. A main debated area of the death penalty would have to be the part in which people die but ultimately don’t serve a fulfilling punishment. In all ways but none the death penalty has a crucial effect on scaring people out of crimes due to the fact they are dying due to a extreme crime and are getting punished to death. The death penalty should be illegal because it cost the state that issues it more that 120 thousand dollars typically for one person’s lawyer fees and for the state to get the lethal injection drugs. However if someone does commit a heinous crime they could also be put on death row and literally sit for several years before even being executed. Therefore the state spends money on the criminal for so many years that it literally can have a economic effect on the state in which it was issued. This causes not only instability in the economic status of the state but the cost of living goes up and the money people make also could fluctuate. The main cause of these crimes could be mental issues and or childhood abuse it could come from a multiple number of medical issues anything that really provokes a person to commit the crime and get charged for it. The biggest thing that affects inmates would be like gangs or someone who purposely makes a person do these crimes, therefore if we help people achieve a dream or a thing they want to achieve then they could possibly stop looking to get into trouble and or cause crimes to happen. In several studies people have been linked to committing crimes that are provoked not only by people but by mental illnesses. There are many topics to this viewpoint and one is expressed by a man named nathan peterson” Capital punishment is an intolerable denial of civil liberties and is inconsistent with the fundamental values of our democratic system. The death penalty is uncivilized in theory and unfair and inequitable in practice. Through litigation, legislation, and advocacy against this barbaric and brutal institution, we strive to prevent executions and seek the abolition of capital punishment.

Said by the supreme court” Capital punishment is cruel and unusual. It is cruel because it is a relic of the earliest days of penology, when slavery, branding, and other corporal punishments were commonplace. Like those barbaric practices, executions have no place in a civilized society. It is unusual because only the United States of all the western industrialized nations engages in this punishment. It is also unusual because only a random sampling of convicted murderers in the United States receive a sentence of death. This also has a hidden meaning to it. It states that other sources of punishment would be more fulfilling or more useful because it’s like putting a dog to sleep when the dog bit or killed something your ultimately putting the being out of its misery and sending it to a better place so there’s not truth or justice to killing someone. Some specialist that study crime and data say that “They argue that the death penalty executing those that are guilty. Capital punishment takes many steps to assure that fewer mistakes is made. In support of their side it is true that criminals get a fair trial in the legal system. Our system assures that lives will be save by execution, just the opposite there little evidence to prove that the death penalty saves lives.” the chance of someone being innocent is just way too much to risk due to people commiting crimes there should really be clear evidence before even sentencing someone to a capital punishment because if you murder an innocent person you will definitely cause people to be angry and you’d punish the wrong person and leave them available to commit another crime scott free.

The first problem is that the justice system is never 100% correct. “Judges and juries can convict the innocent like Donald Marshall, who was jailed for more than a decade for a murder he did not commit. Most crimes end up with people getting jail time or an alternative punishment. Sometimes people are actually innocent. Due to people only going to jail the sentencing can be reversed. A person who is sentenced to death penalty is not . the jury also plays a big role in sentencing someone no matter what people can be sentenced to a crime they didn’t commit due to a jury member possibly having something against another person and even though the jury gets “tested” before the hearing or case they could still potentially hold hatred toward someone or something. This also brings the conclusion that The death penalty is unjust and morally wrong. When a person kills someone else you can’t just punish them by death. the correct punishment is not to murder him or her, you can potentially fix them by a rehabilitation center or possibly a ward of some sort. Why do we murder the murderers if all were going to do is murder again it would be an endless stream of murdering. In a case study scientist and researchers have found that 36 states ban the death penalty or do not have it as a punishment in their from of trial by jury. This proves that most people and states think that the death penalty should not be legal and proves more and more how morally wrong the death penalty is. Not only is killing someone hard to do but to even think of killing another person sickens most. To even fathom the thought of killing them would honestly take a cold hearted person or someone who personalizes in death so typically there would not be anyone who’s willing to take another person’s life that should not be charged with a crime.

In some research it was found that most people who grew up with a not so good childhood or not as equal or does not have as much stuff or as nice stuff as other people were more likely to get a capital punishment crime and were later killed for a crime they commited. Most people who were either treated wrong or were mentally ill have the hardest time overcoming not commiting crimes this is what should truly be looked at when charging someone of a crime. Some people look at the death penalty as “ An eye for an eye” and if everyone goes around having the same mentality or lives the same then what kind of society are we really living in. if everyone lived by the same set standards or the same religion or same sex/gender than technically that makes us all the same and makes all of us a criminal. There could also be a racial difference here, if someone on the jury say does or does not like a person from a different race then you’re definitely going to get an opposite judgement than what is really deserved and could potentially put someone’s life in the hands of someone else causing tremendous pain for not only them but the families and friends of an innocent person.

The Problems With the Death Penalty. (2020, Sep 16). Retrieved from https://studymoose.com/the-problems-with-the-death-penalty-essay 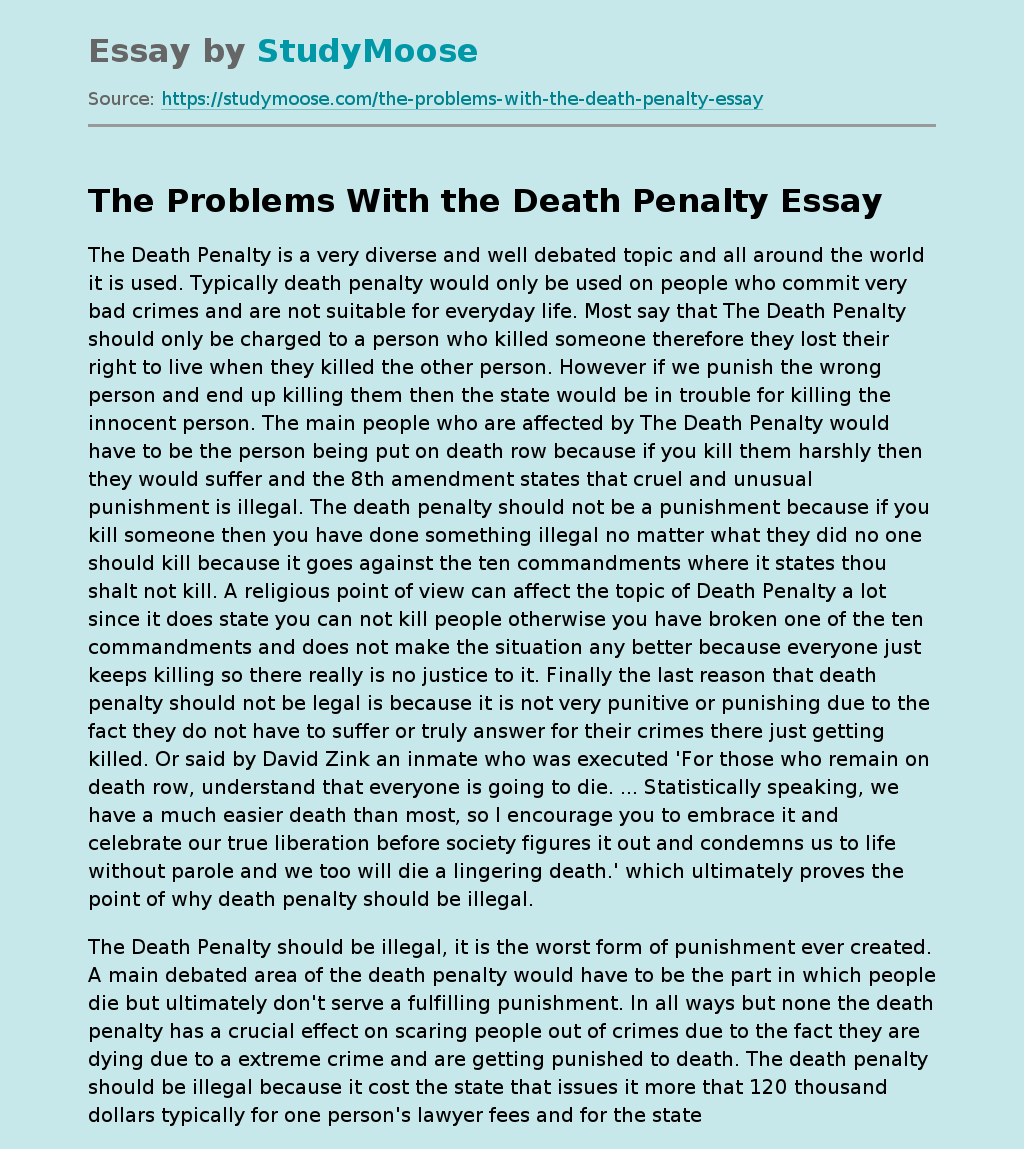