The Probability Of God

H. J. McCloskey, a renowned philosopher in the mid 20th century, wrote a provocative article in 1968 titled, “On Being an Atheist”. McCloskey argues for atheism as the preferred and better belief system based upon his refutation of the theistic arguments. He argues against the existence of God by attempting to refute the cosmological and teleological arguments; as well he endeavours to discredit a God based upon the presence of evil.

In doing this, he extends the boundaries for arguing God, whilst opening the floor to debate free will and the apparent comfort of the atheistic belief system.

Don't use plagiarized sources. Get your custom essay on
“ The Probability Of God ”
Get custom paper
NEW! smart matching with writer

However, through careful analysis of the arguments for God, and an insight into the mysterious free will that God has given man; we see that a theistic belief is logically more sound and preferred. McCloskey says that the proofs for the argument of God cannot definitively establish a case for the existence of God.

Therefore, all those proofs for God cannot be used in the logical argument for a God.

However, McCloskey didn’t recognize the three aspects when approaching the question: does God exist. Through these three studies, we are shown that though no one person can empirically prove the existence of God, He in fact still exists (Foreman, Lesson 18). The three aspects to approaching the question of God are: best explanations approach, cumulative case approach, and the minimalistic concept of God.

The best explanations aspect refers to the existence of God as the best way of explaining the effects that we can empirically observe within our universe.

The cumulative case view tells us that no one argument can get us to the existence of the God of Christianity. Finally, the minimalistic concept of God argues for a personal, moral, and intelligent creator; minimally, the argument is not arguing for every attribute of God (Foreman, Lesson 18) The cosmological and teleological arguments are both attacked and argued against in McCloskey’s article.

In understanding his attacks, the arguments themselves must first be understood. The cosmological argument is an argument for a theistic outlook through a creator God. “[A]ttempts to infer the existence of God from the existence of the cosmos or universe” (Evans, 67) Similarly the teleological argument argues for a theistic perspective through an intelligent God, a God who created “self-regulating mechanisms, designed to maintain their own existence and reproduce themselves” (Evans, 1). “On being an Atheist” begins with McCloskey’s first defense for atheism in arguing the cosmological argument by asserting that the “mere existence of the world constitutes no reason for believing in such a being” (McCloskey) Theologians would argue against McCloskey by using the cosmological argument as foundation, saying that the universe is in need of a cause and that the cause must be a God; based upon the contingency of the universe.

Contingency defined as “things which do exist but not have” (Evans, 72). The response by McCloskey to the ‘need’ for a causer is explained in the statement, “ the cosmological argument] does not entitle us to postulate an all-powerful, all-perfect, uncaused cause” (McCloskey). Within this parameter, McCloskey would be sound in his argument. The cosmological argues for a cause, not necessarily an all powerful, perfect creator.

He sums up his argument against this proof for God in the phrase, “to get the proof going, genuine indisputable examples of design and purpose are needed” (McCloskey). As shown earlier, the teleological is similar to the cosmologic argument in that it focuses an aspect of God; the teleological argument focuses on the concept of God being an intelligent designer (Evans, 79) The statement by McCloskey is not argued through reason, because of McCloskey’s inherent belief in evolution. Continuing on with McCloskey’s assumed evolution, it is apparent that he is refuting the teleological argument based upon another different preconceived belief.

From an already stated quote, the idea that God created an intricate machine such as humans and gave them the ability to reproduce is evidence enough for an indisputable example of design (Evans, 81). Now of course, McCloskey’s notions of evolution blind him to seeing the human as being a design. The response to this would then have to be similar to Evans in, “nature [itself] contains many instances of design… therefore, nature is probably the work of a designer” (Evans, 83) Using this argument to say that through all time and through the apparent evolution, nature remains to show the design of a designer.

In conclusion of the teleological argument against McCloskey; the universe and nature in general needs a designer of great intelligence for the creation of such complicated organisms such as the reproductive human. Even with the notion of evolution in mind, nature around all living things is an example of design, as nature itself bears non-evolved markings of design. McCloskey finishes refuting the cosmological and teleological argument by moving on towards the problem of evil within our universe.

He argues this by claiming that the mere presence of evil and imperfection in the world is against “the perfection of the divine design or divine purpose of the world” (McCloskey). In a first retaliation to this, one must return to the three aspects in approaching the question of God’s existence. Within those aspects it is made evident that no one can fully understand or explain the nature of God. However, just in the fact that McCloskey refers to evil and that there is a possibility of a God that allows that evil, shows that there in fact is a God who also has other attributes and goals in mind.

McCloskey opened the floor for debate about the mind of God, stating that he is able to concur to the possibility of there being a God. He shows this through what he says in his article; “no being who was perfect could have created a world in which there was unavoidable suffering or in which his creatures would (and in fact could have been created so as not to) engage in morally evil acts, acts which very often result in injury to innocent persons” (McCloskey). In furthering this argument, the discussion may lead to what has God done to allow evil.

In a phrase; God, the perfect creator, gave perfect free will. Now, the freedom to discuss the nature of God is given; the parameters for arguing the existence of God have extended. God and evil are not in any way compatible (Evans, 159). This is a known concept and agreed upon by all theologians, so with this idea in mind; God allows the existence of evil. “[We do] not try to explain why God actually allows evil but [we argue] that it is reasonable to believe that God has good reason, even if we are not in a position to discern what they are” (Evans, 161).

There are many ways of refuting McCloskey’s objective to theism yet a true theist must be careful not to limit God’s power. McCloskey would probably be quick to give an accusation for an easy cop-out argument. However, when arguing God, and especially when McCloskey opened the floor to arguments on what God is thinking, theists are allowed to argue for God in saying that they do not fully understand the God. For a true theist, we cannot undermine or limit the power of God.

Arguing free will, McCloskey asks, “might not God have very easily so have arranged the world and biased man to virtue that men always freely chose what is right? ” (McCloskey). In refutation of this, a theologian would argue that the second order evil, the continual evil produced by creation, happens because humans choose foolishly to abuse the free will given them by the perfect God (Evans, 164). McCloskey is attributing evil to God, when in fact evil is due to the wickedness of man and his desire to misuse the freedom that God has given man.

However, there are humans who choose to not do evil and those who choose to do good. God allows evil so that humans may choose good if so desired. Concluding the problem of evil very briefly; God gave his creation free will, through this freedom humans have chosen to do evil, and God allows this evil so that others will choose to use the freedom given to worship God. To restrict the choice to do evil, the choice to do good would also have to be restricted. To close his argument McCloskey falls back on the concept that atheism is more comforting to the human heart than theism is.

However another philosopher, one William Craig, gives a counter argument to that notion in his article, “The Absurdity of Life Without God”. Craig gives numerous reasons why McCloskey is incorrect in his statement. Craig focuses on the idea that there is no meaning, purpose, or value to life without the promise of immortality or God for that matter (Craig). Continuing on, McCloskey’s response to this would be that, “atheism, adopted by a thoughtful and sensitive person, leads to a spirit of self-reliance, to self-respect which demands that we comfort and help those who need such support… (McCloskey).

With McCloskey’s thoughts and Craig’s thoughts in mind it is ultimately the decision of the choice maker to decide. A final word on the problem of comfort; McCloskey reasons that thoughtful atheists would be kind and would comfort their society based upon their own self-respect, however, one would argue that without a motivation or purpose to the actions of comfort or restrain the idea is better in concept than reality. H. J. McCloskey wrote an article “On Being an Atheist”. In this article he defends atheism by arguing against the cosmological and teleological arguments for God.

He goes on to bring in the problem of evil after recognizing the probability of God. He extends the boundaries for arguing God, whilst opening the floor to debate free will and the apparent comfort of the atheistic belief system. However, through careful analysis of the arguments for God, and an insight into the mysterious free will that God has given man; we see that a theistic belief is logically more sound and preferred. “For if God exists, then there is hope for man. But if God does not exist, then all we are left with is despair. ” – William Craig

The Probability Of God. (2016, Nov 25). Retrieved from https://studymoose.com/the-probability-of-god-essay 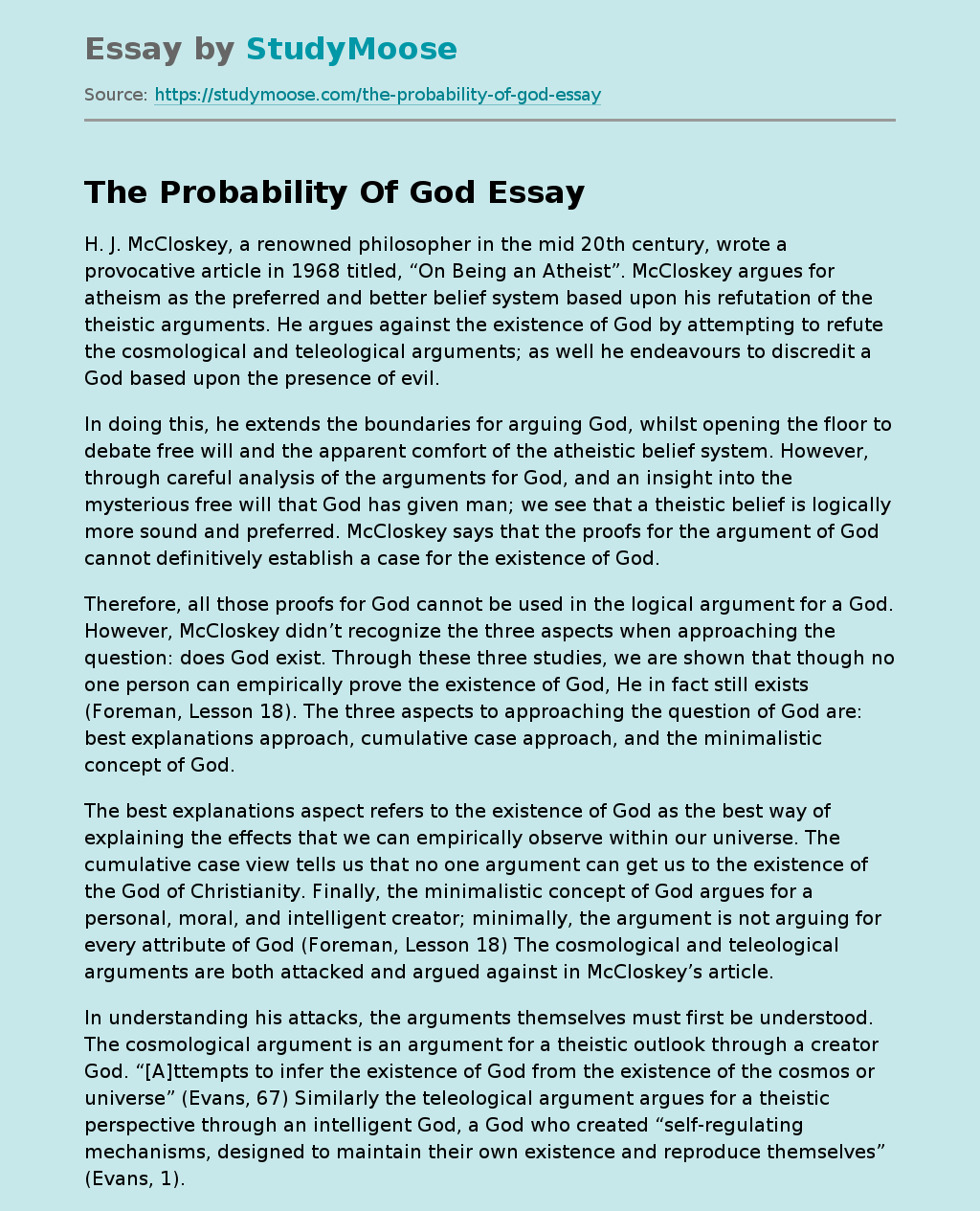