The Pro And Cons Of Emigration

Emigration involves a person leaving his/ her native region or country and ends up settling in another. It is similar to immigration but is from the person’s country of origin perspective. Before the country’s boundaries were establishment, the human movement was referred to as migration. There are several reasons that make people to emigrate. Some might be political or economic motives, or for personified reasons like to find a spouse or emigrate to join one’s family members.

A number wealthy people from the rich countries that are characterized by cold climate may emigrate from their countries to the countries with warmer countries after their retirement.

Don't use plagiarized sources. Get your custom essay on
“ The Pro And Cons Of Emigration ”
Get custom paper
NEW! smart matching with writer

Several economic or political emigrants shift collectively with their own families towards the new countries or regions where they are likely to can find employment opportunities or peace that may not be in their available country of origin. Right through history a bug number of the emigrants go back to their countries of origin, mostly after earning and saving satisfactory money from the other country.

Mostly there arises conflicts between the natives and the new cultures of the emigrants that definitely results to social contrasts, it’s the emigrant who mostly is referred to as a foreigner who finds him/ herself in a situation which he may not be comfortable, therefore he/ has to adapt and understand the social system and the legal framework of the country they are migrating to even though the they may be unfamiliar or strange to the emigrants.

Emigrants had a deep influence on the humankind during the 19th and 20th century, at a time when several hundred of thousands of the poor families moved to US, Brazil, New Zealand, Canada and Argentina from Europe. Immigration or Emigration shouldn’t be mystified with the involuntary migration phenomena like the population transfer or the ethnic cleansing . Push factors are the motives that force the people to leave a country of origin whereas the pull factors are the factors that attract people to a certain country.

The push factors include war or the armed conflict, famine or drought, disease, poverty, political corruption, disagreement with the politics, religious intolerance, natural disasters, discontenting with the natives like frequent harassment and bullying, lack of opportunities for employment and rights violations With the exception of disagreements with the politics and the discontents with natives, all the other push factors mostly affect the under developed countries because even the natural disasters are not likely to lead to emigration.

The pull factors include higher incomes, lower taxes, better weather, better employment availability, better medical amenities, better education services, better conducts among people, family reasons, political stability and religious tolerance. In the United States, there are five myths about emigration, these common myths are historically and typically concerned with the immigrant populations these myths state that: o America is flooded with immigrants o emigrants are taking jobs from the U. S. citizens emigrants are draining the on United States society’s resources o Aliens refuse to assimilate, depriving us of our cultural and political unity o Non-citizen emigrants should not be permitted to the Constitutional rights. In his arguments. Advantages of emigration When people leave heir country and settle in another country, there a rise in the supply of the unskilled labor in that country, this is because many immigrants end up occupy low paying, low skill jobs and therefore their presence is normally complementary.

Due to their contributions, generally the overall economy becomes stronger; this improves the living standards of the native people due to their supply of cheap labor which could not have bee the case if they had not emigrated from their country There is increases in the younger work force, this is because most emigrant are young people who are productive, this leads to increase in the ratio between the retired people and the younger workforce and can result to essential changes in the social security systems.

The emigrants that arrive in the foreign countries with specific skills often gets job relevant to their skills, this means they contribute to the national net national income of that country through the taxes. In the United States, 20% of all the doctors are emigrants. Those who argue against the emigrant say that the number of the foreign experts in the United States is kept very low because these skilled workers are needed more in their countries of origin.

The emigrants tend to move to the countries with the best standards of living, with political and economic stability, people with the best education and bright people in the world go there and supply to their nation in several advantageous ways. Emigration leads to cultural diversity that enriches several aspects of nation like the fashion, cuisine, etc. Despite the decrease in the birth rate in the native citizens, emigration leads to increase in the population, this the number of consumers for the products produced in the native country, this also increases the number of available workers which leads to a strong economy.

Emigration leads to a further diverse generic pool, which eventually decreases the dangers of risky genetic diseases. Emigration is a national tradition in most developed countries like the United States where most of the people are descendants of the emigrants. Disadvantages of emigration: Emigration leads to increased poverty in the native country, this is because emigrants tend to occupy little wages employment, therefore their wages are very low and are severely affected by the recessions of the economy.

Unlike the natives, most emigrants usually do not have life insurance and they opt for government and public support in times of crisis. Since most emigrants are not skilled, they increase the educational costs in the native countries. Immigrant children and their generation accounts more an unappropriated educational costs from the fixed public education budget due to their higher rate of birth and their requirement for intensive instructions.

For example the Hispanics that emigrated to the United States have low educational attainments that the native Americans hence demanding more training so that they can fit in the job market in US, but the emigrants from Latino have education training closely similar to that of the native Americans with majority of the third generation speaking English fluently while minority speak Spanish. The emigrants lower the wages of the unskilled labor force. This is because the overall increase in supply of the unskilled labor with a constant demand is reflected in the decrease in the wages.

Emigrants raise the chances for the dangers of terrorism. There are some arguments that the continuation capability of illegal emigrants to enter other countries raises the threats of domestic terrorism and the associated risks. But in reality these threats are minimal. The recognized dangers connected with the terrorism involve extremist Islamic individuals. Though Islam isn’t so outstanding in Mexico and the Central American countries, cooperation of intelligence arrangements between the Mexico and U. S. have been designed to monitoring any threat that the extremist Islamic individuals who enter or live in Mexico might present.

The Pro And Cons Of Emigration. (2017, Feb 14). Retrieved from http://studymoose.com/the-pro-and-cons-of-emigration-essay 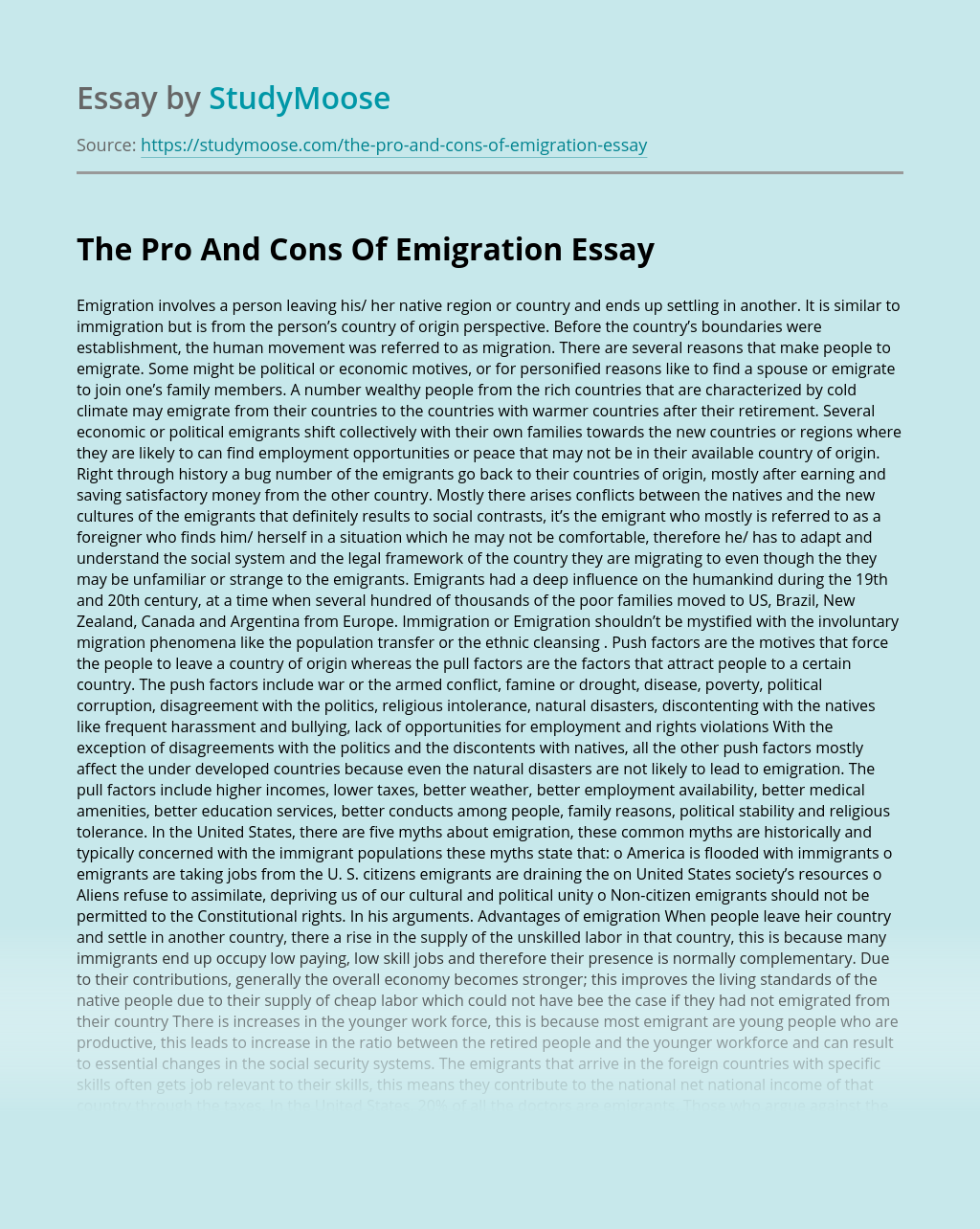