The Presentation and Promotion of Morality in King Lear

Throughout life humans are faced with many crises and obstacles. It is the way in which we react to these obstacles, however, that ultimately defines our personalities. This idea is found in works by William Shakespeare where characters are continually faced with conflicts and strife. In Shakespeare’s King Lear, characters react to conflict and chaos in a number of ways thereby revealing their personalities and solidifying the idea of a certain code of conduct to live by. Shakespeare’s code of conduct allows characters that are cautious as well as principled to achieve some sort of goal or revelation for the greater macrocosm.

Don’t waste time
Get a verified writer to help you with The Presentation and Promotion of Morality in King Lear
Hire verified writer
$35.80 for a 2-page paper

The characters that we would define as immoral act upon personal gain and are ultimately foiled, yet some of those that we would consider to be moral characters are met with untimely deaths. Despite a seeming injustice to the code of conduct caused by some protagonist’s deaths, there is still a justice to be found in the overall good of the kingdom as the concepts and actions of morality persevere.

Before taking a deeper look at the personalities that describe certain characters we must delve into the question of how these personalities are developed and inferred by a reader.

In Shakespeare’s other plays, character’s traits are usually revealed by some degree of inward thinking: A soliloquy or a weighing of options. In Hamlet for example, characters only engage in confrontations when absolutely necessary and they are completely characterized by their contemplations and thoughts. King Lear is the complete opposite.

Soliloquies are rare and people are almost always characterized by the actions they take, not the mental processes preceding the action. Only by looking at the physical behaviours of the characters in King Lear can we define their personalities.

Mack agrees that “action comes as naturally as breathing and twice as quick. ” (227). Some characters are quite rational; others are not. Some characters act with integrity; others do not. While exploring the different combinations of these traits in characters, and how they affect a character’s impact on the kingdom, one realizes quickly the code of conduct that Shakespeare advocates. Characters such as Edmund, Regan, and Goneril act quite rationally throughout the tragedy of King Lear, yet they rarely act with integrity.

It is the ultimate aspects of deception and dishonesty in these characters that Shakespeare punishes at the end of the play. At the onset of the play Regan and Goneril are depicted as deep thinkers. They regard the chaos caused by Lear’s splitting of the kingdom as something they should further think on, realizing that the man has been having “unconstant starts” (1. 1. 304). The pair begin to go through a number of steps to decrease their father’s power and increase their own.

These actions reveal that these characters are quite calculating and intelligent. Their following actions to pluck out Gloucester’s eyes and to compete against each other for Edmund’s love are what reveal the most damning aspect of their personalities: ambition. The ambition that the two sisters have for increasing their own power portrays them as the major villains of the play and can be considered the reason for the many dishonest and deceiving things that they do. Another character that has a similar personality to the two older sisters is Edmund.

After the chaos of the initial scene Edmund realizes that things are looking favorable for changes in the kingdom so he begins to scheme for his own promotion within the court. He reveals his calculating and rational mind as he sets up the plot to run his brother out of the kingdom and become the most loved son. Like the sisters though, Edmund’s ambition soon takes hold of his entire personality. Edmund reveals this when he betrays his father’s trust and juggles the love of Regan and Goneril. Though all three of these characters react to situations with logic and brilliant planning, they rarely do what is virtuous.

They also negatively impact England as a whole when the country is brought into a fight under their rule. The code of conduct that Shakespeare is following may allow the immoral characters to gain short term benefits, but they do not retain them. These characters do not maintain power, the chain of being is brought back to equilibrium, and all three meet with their own deaths. Characters such as Lear and Gloucester act with integrity throughout the play, so it is natural for a reader to believe that these moral characters deserve to live happily ever after.

However, while analyzing the actions hat these characters take one can notice a common trait of “blindness” and irrational thinking. From the beginning of the play, Lear sets into motion a series of unfortunate events with his decision to retire and his absurd idea to split his kingdom based on declarations of love. When people question Lear’s decision he is firm in what he has said and reveals his overwhelming self-pride. Lear’s pride blinds him from the true love of Cordelia and the reliable advice of Kent. Gloucester is a parallel character to Lear with his blind trust of his youngest son and the other members of the court.

Gloucester is tricked by Edmund into believing that Edgar has plotted his death and accepts the idea without even talking to Edgar once. Though irrational early in the play, these two characters do end up having their turning points and take action to right the wrongs they have committed. Gloucester does this by standing up for his king and Lear by discovering his short-sightedness at the heath. The code of conduct that we see these characters display by the end of the play is one of great integrity, and an ability to look beyond the grandiose and deceiving outer shells of deception.

Though these older characters die, the ideas that they discover about the way to live and love are passed on to the kingdom and to other protagonists like Kent, Edgar and Albany. Characters such as Kent, Edgar, and Albany demonstrate in differing ways that they approach situations with rationality and integrity. It is this combination of rational and honest decision-making that Shakespeare advocates and rewards with life and even promotion at the end of the play. There are a number of things that distinguish these characters from the previously discussed protagonists.

Kent and Edgar do what is moral and loyal at all times, helping even those characters that disowned and banished them in earlier acts. There is never a question of character. These model citizens do not have any early mistakes to redeem, but they help their superiors along their paths to redemption. Albany is another honest and intelligent character who is very quick to realize that his wife and sister are acting unjustly. Like Kent, Albany is an extremely good judge of character and immediately feels uneasy when something immoral is taking place. In addition to being moral these characters are also extremely cautious and overly logical.

Edgar puts on the guise of Tom and does not challenge his brother until the war between France and England is over. Albany does not take immediate action on the letter ordering his death and puts his disputes aside to fight the war. Kent knows to run away from his King initially, and to disguise himself as Caius when returning to Lear’s side. These three characters live in the end as they embody Shakespeare’s ideas of intelligence and morality, and because Shakespeare needs some characters to carry on the new mind-set of the king and the values of Cordelia. Cordelia, more than any other character, depicts the overall code of morality.

Cordelia is seemingly flawless. She reacts to her father’s game of love by saying plainly that she loves the king “according to [her] bond, no more nor less” (1. 1. 95) This reveals Cordelia immediately as an honest person, and a rational thinker. Cordelia continually shows love for her father and attempts to aid him even after he shuns her from England. With the portrayal of near saintliness throughout the play, Cordelia’s death in the final act is puzzling, unanticipated, and seemingly undeserved, yet it should not be taken as evidence against Shakespeare’s use of a code of conduct.

There are two ways to justify Cordelia’s hanging. One can choose to reason that Cordelia is not actually flawless. We can question the true extent of Cordelia’s love for her father when she was willing to leave him so readily to her sister’s care. One can decide that Cordelia’s attack on England was neither rational nor logical as she had already regained her father’s love, making the attack an unesecary act of vengeance.

A more insightful explanation is that since Shakespeare’s code of conduct is completely fulfilled by Cordelia, Shakespeare uses her death, like the crucifixion of Jesus, to show what effect the folly of others can have on even the purest characters. The idea of Cordelia lives on after her death as a symbol of true love and integrity. Her death will have a positive effect on the macrocosm, bringing together all members of society to mourn for the youngest daughter of the king. Cordelia leaves a legacy of virtue when she dies, setting a definite code of conduct for the other moral characters to follow.

When looking at personalities of characters in Lear we see that Shakespeare believes in high levels of integrity and critical thinking. Those that are immoral are foiled. Those that do not always act logically must endure to find the true way of conducting themselves. Those who are moral and rational are rewarded, and exemplify a code of conduct. When we see a moral personality in action, there is always a positive effect on the people who subscribe to it, and to the society as a whole, regardless of whether a character lives or dies.

The Presentation and Promotion of Morality in King Lear. (2017, Feb 09). Retrieved from http://studymoose.com/the-presentation-and-promotion-of-morality-in-king-lear-essay 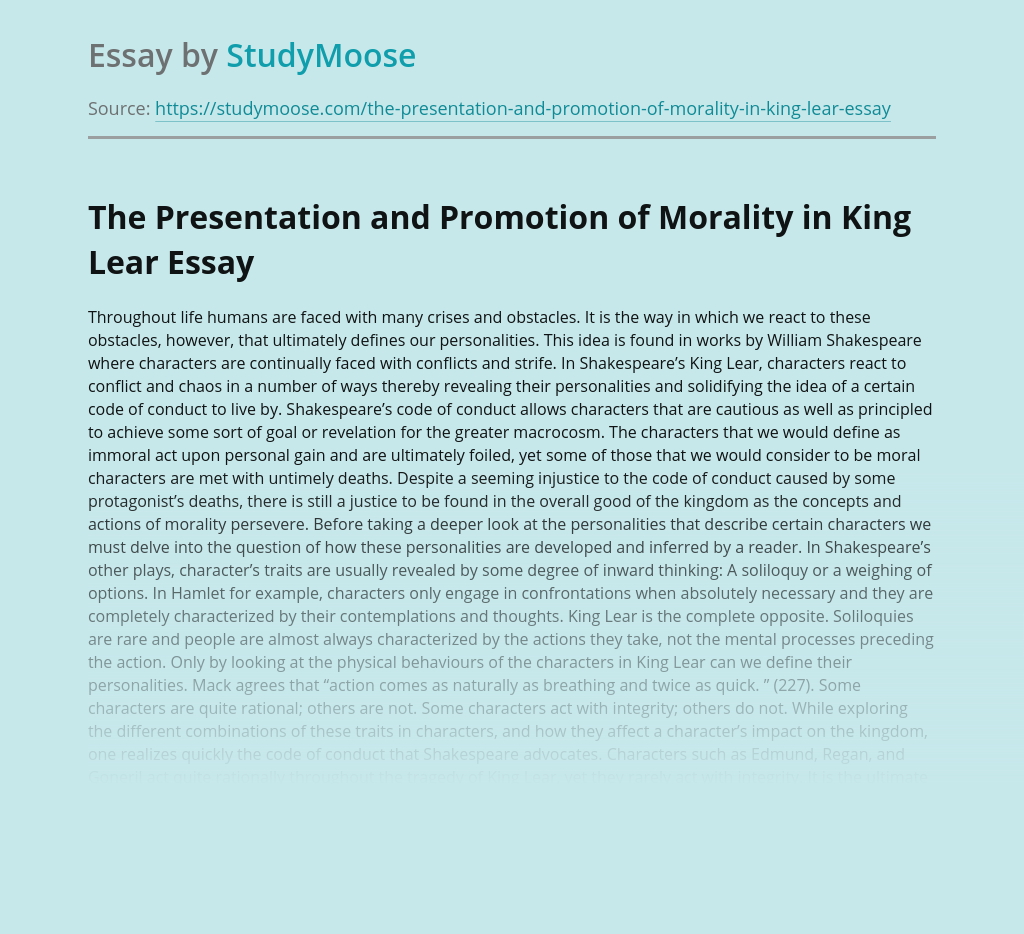 Don’t waste time
Get a verified writer to help you with The Presentation and Promotion of Morality in King Lear
Hire verified writer
$35.80 for a 2-page paper
Stay Safe, Stay Original