The Presence of Black People in the Bible

Although not very important, I took the liberty this past month(Black History) to document my research to the age old question, “Was Jesus Black,” after a small debate with my auntie Angelina Quarterman arguing that He was a Jew, and Jews are White(lol). The typical Hollywood image in which ancient Israelites look like fair-haired White Americans is way off the mark. The people of the bible were Semitic(Afro-Asiatic languages) and would have been dark- skinned. The racial emnity & equating Black with evil was an unfortunate development in later Europe, devised in part to justify African slavery.

Don't use plagiarized sources. Get your custom essay on
“ The Presence of Black People in the Bible ”
Get custom paper
NEW! smart matching with writer

This topic of course has been a discussion almost since the introduction of Christianity to the western world. What color was Jesus Christ? I challenge those who may believe that Jesus was of White, Arabic, or Semitic(which doesn’t consitute a race, but a group of languages and culture) descent to do some research. We must first begin by understanding that the first humans were black and were discovered in what is known today as Africa ( Akebu-Lan, which means Mother of Mankind to the natives of Africa or Garden of Eden).

This name for Africa (Alkebu-Lan) was given to the continent by the Moors, Nubians, Numidians, Khart-Haddans (Carthagenians), and Ethiopians. The Muslims called it “El Bilad es Sudan” which translates as “Land of the Blacks”. You must also note that Africa was a name given by European conquerors, particularly the Romans/Greeks. There are many other names that Africa has been called by such as Kemet, Libya, Ortegia, Corphye, Egypt, Ethiopia, Sudan, Olympia, Hesperia, Oceania, and Ta-Merry.

It was even called “Aethiops” which meant burnt faced people in Greek.

Many also do not know that the original Hebrews were black-skinned people. Today we have terms used to describe blacks such as “Negro” or “African” which does little to say or prove the roots of black or darker skinned people. The term Negro was given to Blacks as they left Africa for the slave ships (ca. 1500 A. D. ). Negroland was also used by the Portuguese which means “black land” of course. This term was used to save them from having to call them by their true roots, which were Cushites, Nubians, Ethiopians, or Abysinians, in which they are called by in the Bible.

These people were the founders of Christianity and Judaism in Alkebu-Lan, North Alkebu-Lan and Europe. What we have today is Western bias which has thwarted the history of the black race and it takes great study to get back to the truth. Even Moses (who married an Ethiopian woman) is commonly portrayed as an Eurasian or European. You also have people like Tirhaka, King of the Ethiopians, and as a Pharaoh was the fourth member of the Twenty-fifth Egyptian Dynasty that ruled Egypt from (730-653 B. C.).

This man is commonly portrayed as European or White. Tirhaka was of grave importance to Israel in the days of Hezekiah. His armies were needed to stave off an impending Assyrian assault by Sennacherib. Furthermore we arrive at the question; What did Jesus of Nazareth look like? His Mother Mary was black/afro-asiatic and closely resembled those of Yeminite, Trinidadian, or African American descent of today. The perception of the Madonna and Child can also be challenged. In Matt 2:15 and Hos 11:1 we find “Out of Egypt, I have called my son.

” This particular passage speaks about Mary and Joseph’s attempt to hide the one that King Herod feared would displace him. Can you imagine the divine family as Europeans hiding in AFRICA?!? There are literally hundreds of Shrines that depict the Black Madonna in many parts of North Africa, Europe, and Russia. These are but uncanny reminders of the original people who inhabited ancient Palestine. Watercolors and marvelous oils of the painter’s brush has recast the image and rebirth Jesus as a European.

Medieval and renaissance artists (such as Michaelangelo) made him suitable for a European form of Christianity. You even had people like Shakespeare have a hand in editing the the King James Version of the Bible. Again people will argue Jesus was Semitic, but again this is a group of languages that include both Hebrew and Arabic and NOT a racial type. It is ironic that the term “Semitic” was created at around the same time the “Middle East” was created. It is as they sought to simply de-Africanize the sacred story of the Bible by disconnecting a part of Africa.

In my final analysis I would like to provide evidence that Jesus was of African descent based on the descriptions given in the Bible as regard to appearance. Dan 7:9 reads “I beheld till the thrones were cast down, and the Ancient of Days did sit, who garment was white as snow, and the hair of his head like the pure wool: his throne was like the fiery flame, and his wheels as burning fire. ” We all know that blacks have hair that closest resembles that of wool. We continue on to Rev.

1:13-15: “And in the midst of the seven candlesticks one like unto the Son of man, clothed with a garment down to the foot, and girt about the paps with a golden girdle. His head and His hairs were white like wool, as white as snow; and His eyes were like a flame of fire; and His feet unto like fine bronze as if they burned in a furnace; and His voice like the sound of man waters. ” I can go on and on and continue to prove my point, but as of now you can decide for yourself.

The Presence of Black People in the Bible. (2016, Dec 23). Retrieved from https://studymoose.com/the-presence-of-black-people-in-the-bible-essay 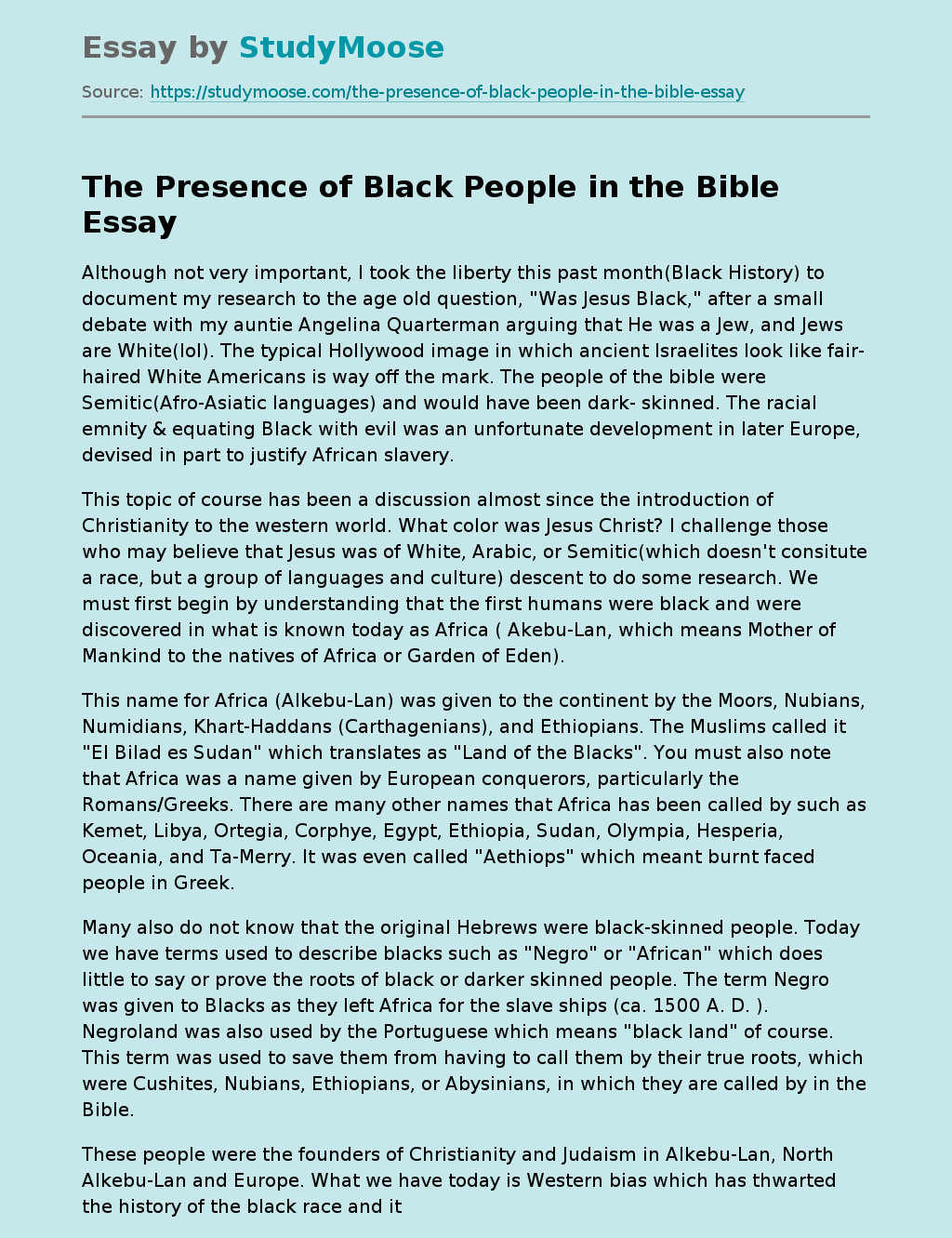