The Prayer of a Black Boy Poem Analysis

In the poem The prayer of a Black Boy the writer wrote the poem in the point of view of a young black boy which is the speaker of the poem. who was a slave at this time.

Don't use plagiarized sources. Get your custom essay on
“ The Prayer of a Black Boy Poem Analysis ”
Get custom paper
NEW! smart matching with writer

The poet wrote this poem like a narrative story and he makes the poem very descriptive and he also makes his point across by using alliteration which will create a specific sounds or images stand out, he also uses metaphor to make images of what the slaves went throw.

The writer shows us how desperate the and humiliated and tired the black people was. The writer uses metaphors for example when he reflects in the first line of the poem the word “tired” This is a metaphor often used by elderly people when they have lived through many events. They are not physically tired but mentally exhausted. This suggests that the young boy has witnessed many atrocities and culture changes inflicted on his race by the white culture.

The poet also gives us to understand that for a black person to go to school was very difficult because of the way he was seen and mistreated and humiliated because of this.

He pleads to god for not going to school “Lord, I don’t want to go to their school” please help me that I need to go again” the boy says it was to difficult because ” the road to school is steep” By this he means that the school isn’t actually on top of a hill, but it is a mental ascent to have the courage to accept another culture teaching him western traits, most of which aren’t relative to the life he wants to leave and that he thought that he was going to loose he culture and way of learning which was by traditional dances and by story telling under the light of the moon “who do not know how to dance by the light of the moon”.

The poet gives us to understand that the boy prefers to carry on with his own tradition ” I want to follow father into the cool gorges” because he finds his culture more interesting we can see this when he writes a personification “when the night is hovering over magic forest” he uses a personification in here to create an image of the night floating over the trees which is obviously not true because the night is a natural thing which is everywhere, he also shows freedom and happiness of his ants esters by writing “Where spirits play before the dawn.” He shows freedom of how the spirits play o the night.

By the writer using alliterations he makes an image of a ship throwing out like animals its crew “a ship on the sugarfields,

The writer writes again “Lord, I do not want to go to their school,

Please help me that I need no to go again”, the writer repeats this phrase again to show how desperate and unhappy the boy is and to show that the boy doesn’t want to be the “gentleman of the city” or as the whites “call it a real gentleman” ,in here the writer gives us to understand that the boy doesn’t want learn the by the way that the whites learn by using books of other countries and learning things that they don’t now or seen before, we see this when he say “Why should we learn again from poreing

The Prayer of a Black Boy Poem Analysis. (2017, Sep 26). Retrieved from https://studymoose.com/the-prayer-of-a-black-boy-poem-analysis-essay 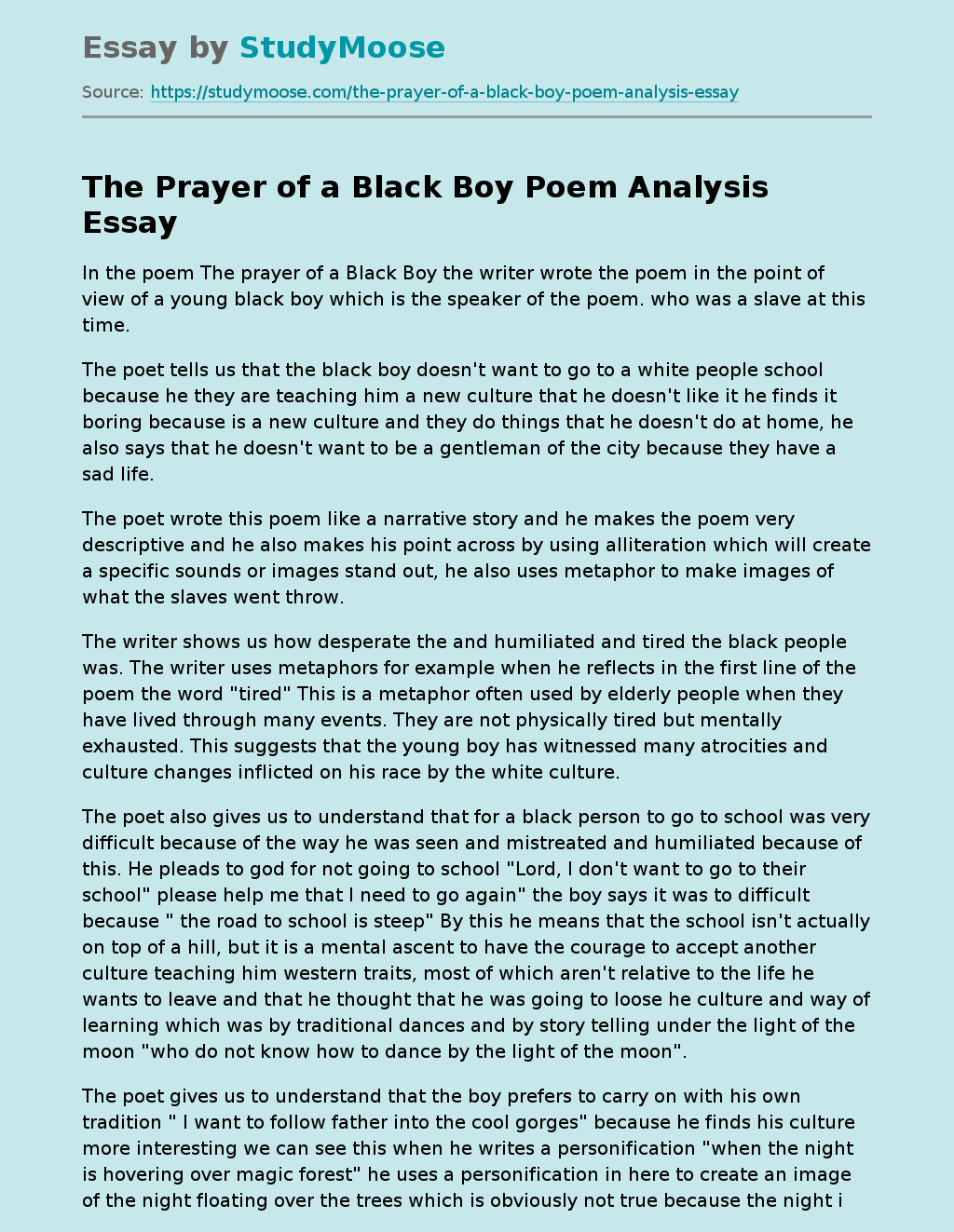