The Power of Dance

This chapter takes a broad look at the relationship between human movement, framed as dance, and important identities such as religion, ethnicity, gender, and social status. While not specifically focused on issues of identity in America, this chapter will provide an important foundation in understanding the broader scope of how dance can be seen as a representation of cultural values, which will underlie the remainder of our coursework.

1.1.1 Before starting this chapter it might be useful for you to write out your definition of dance.

Turn in your highest-quality paper
Get a qualified writer to help you with
“ The Power of Dance ”
Get high-quality paper
NEW! AI matching with writers

Let’s pretend for a moment that aliens landed on earth looking for intelligent life. Obviously they ended up at your apartment and asked you all sorts of questions. One of which is: “What is dance?” What would you say?

Starting before we are even born, we experience life through moving our bodies. From small movements like breathing and blinking to big movements like running and jumping, every human being has the impulse to move.

1.1.2 “The impulse to move is the…raw material that cultues shape into evocative sequences of physical activity that we call dance” List three of the six examples

1.1.3 “Dance Anthropology views dance in its…social and cultural context.” 1.1.4 “Encoded in the form (the shapes and colors of the bodies, costumes, and props, the sound and rhythm of the music, etc.),technique (the methods by which dancers and musicians learn the dance), and structure(how the components of the dance are organized into a larger whole) of every dance are meanings and values of importance to the dancers and to those who share their view of the world.

1.1.5 How does an anthropological view of dancing at a Judeo-Christian wedding shed light on Western society? What do we learn about Judeo-Christian culture from looking at wedding dances? 7

1.1.6 Western missionaries interpreted Tahitians dances as immoral and in 1820 outlawed any practice associated with dancing. Tahitian dances, though, serve a powerful purpose to enforce gender distinctions. Why is this important to Tahitian society, and how are gender roles enforced through dance? 9

1.1.7 When looking at dance from an anthropological view one must see that “dancing occurs not in isolation but…as part of some culturally shaped event”

1.1.8 Very different than the dance of Cambodia and Tahiti, “Ballet, which is the quintessentially European form of dance drama, had its origins in…the court entertainment of Renaissance Italy and France.”

1.1.9 How were court dances structured to reveal the hierarchy of the court? social station of each men and women was revealed by the order in which they danced. Couple by couple, before the assembled nobility; higher rank danced first. “Many ideals of courtly behavior were refined into aesthetic principles.”

An example of a Western European Aesthetic: “In its resolve to prevail over, rather than accommodate, the forces of nature, ballet gives expression to one of the characteristic aspirations of Western societies.”

1.1.11 What shapes or elements of Ballet seek to prevail over the forces of nature? illusion of weightlessness

1.1.12 Europeans danced to be free from power of nature, while Native Americans danced to access the power of the natural world. “Dance was good for the body and good for the spirit and essential to integrating the two. The natural world pulsed with power; since….the same powers animated the human body, the body could serve as a kind of lever to bring about changes in the world.”

1.1.13 How did the Ghost Dances begin, what did its practitioners believe dancing the dance would accomplish, and how did the American government react? appeared in the late 1880s. Wovoka prophesized the coming of a great earthquake. Those who believe will rejoin their resurrected ancestors on a new-made earth of peach and plenty.  Is your definition of dance beginning to change? Which example has contrasted most with your definition of dance?      

1.1.17 After reading this chapter, which author do you think is the closest to actually defining what dance is? Why?      

1.2 Dancing: Dancing in One World

This video documents an international cultural festival that took place in Los Angeles. Again, while many of the groups presented here are not American, you will hear peoples from around the Pacific beautifully expressing how dance is an integral part of their culture. While the American public might not be as conscious of the powerful connection between movement and identity, it is the claim of this course that the former can be an important lens on the latter, even in America. Listen closely to how the participants at this festival talk about dance and culture. Compare this with how you relate dance and culture.

At the beginning of the video, the festival coordinator claims that: “Culture is the only way you can move across the boundary lines of language, race, and economic ghettoization.” Certainly language, race and economics are part of culture, but the speaker is using a narrower definition. 

1.2.1 Is culture only the artistic activities of a people (dance, poetry, drama, etc.), or is it the sum total of all their activities (arts, language, business, education, science, etc.)? How would you define culture?      

At the Los Angeles Festival, groups from around the Pacific came to celebrate their culture “most brought dance because, for most, dance is at the heart of culture.” “Culture is absolutely at the center of our lives, our history, our future, and the way we hold our communities together.”

1.2.2 Three different speakers offer examples of how dance represents culture: 1. According to the narrator, what issues of dance are also central issues of government and philosophy?      

2. According to Mauvaka what purpose does traditional dance serve?      
3. According to Mitoma how does dance allow us to know our own and other cultures?      

Native American Dance
1.2.3 Form: How would you describe this dance? Choose at least five adjectives that illustrate the forms that you see.      
Structure: How is the dance organized? Who dances with whom? How do they relate to each other and the audience?      
Technique: How did the dancers learn this dance?
     
1.2.4 How have powwows been important in maintaining Native American cultures?      

1.2.5 Form: How would you describe this dance? Choose at least five adjectives that illustrate the forms that you see.      
Structure: How is the dance organized? Who dances with whom? How do they relate to each other and the audience?      
Technique: How did the dancers learn this dance?
     
1.2.6 How has hula been important in maintaining Hawaiian culture?      

1.2.7 Form: How would you describe this dance? Choose at least five adjectives that illustrate the forms that you see.      

Structure: How is the dance organized? Who dances with whom? How do they relate to each other and the audience?      
Technique: How did the dancers learn this dance?
     
1.2.8 What purposes does dance serve in Aboriginal culture? How is dance a form of communication?      

Balinese Dance
1.2.9 Form: How would you describe this dance? Choose at least five adjectives that illustrate the forms that you see.      
Structure: How is the dance organized? Who dances with whom? How do they relate to each other and the audience?      
Technique: How did the dancers learn this dance?
     
1.2.10 What makes Balinese dance unique among all the dances in the world?
     
Stamping Ground
1.2.11 For most of the course we will be looking at dance that is made for the stage, which is different than most of the dances you have seen in this video. Even on the stage, though, culture is represented. Here Kylian is inspired by Aboriginal culture in his creation of Stamping Ground. Compare Kylian’s dance with the Aboriginal movement you previously saw in this video.

1.2.12 Do you think it is acceptable for him to use the dances of another culture? What happens when you “give away a dance”?      
Later in the course we will consider the issues of confiscation and fusion. Has Kylian confiscated (stolen) the dances of the Aborigines, or has he fused (combined) their dances with his? Or is it both?      

1.2.13 Form: How would you describe this dance? Choose at least five adjectives that illustrate the forms that you see.      
Structure: How is the dance organized? Who dances with whom? How do they relate to each other and the audience?      
Technique: How did the dancers learn this dance?
     
1.2.14 How does African dance celebrate a woman’s body in a way that ballet and modern do not? Please list the name of the choreographer.      

1.2.15 How has television affected the spread of culture? 

1.2.17 What image of dancing stands out most in your mind? Try to describe it as you had to explain what it looked like to someone who had never seen it before.      

1.2.18 Did you see yourself represented in any of the dances in this video? Even if your culture was not specifically named, were there any elements of the dances that were similar to dances from your culture?      

As we consider the role of dance in representing identity we must remember that there are multiple levels at which dance conveys culture. In this chapter you will read about styles of movement that are representative of either European or African groups, pay attention to the description of how bodies are moving and compare this to what you see in the documentary New Worlds, New Forms, or what you know about African versus European forms. In addition to how the bodies are actually moving, this article traces how dances from Europe and Africa were structured differently. Pay attention to the tension between the African influence of freedom, improvisation, and individuality, and the European influence of structured partner dancing.

Dance can be conservative, reinforcing (or conserving) cultural values. It can also be a progressive force, challenging the status quo or fusing the cultural values of one or more group.

1.3.1 “When people leave the society they were born into, either voluntarily or involuntarily, dance is one of the things they take with them… And when people from different backgrounds find themselves living side by side in a new setting, the result is a fusion of dance forms….as people borrow from one another and transform what they borrow from one another to reflect new social realities.”

1.3.2 Describe how African dance and drumming has remained the same in the new world:      

1.3.3 Describe how African dance and drumming has changed in the new world:      

1.3.4 Describe how the dances performed by enslaved Africans and white masters differed fundamentally:

The Power of Dance. (2016, May 07). Retrieved from http://studymoose.com/the-power-of-dance-essay 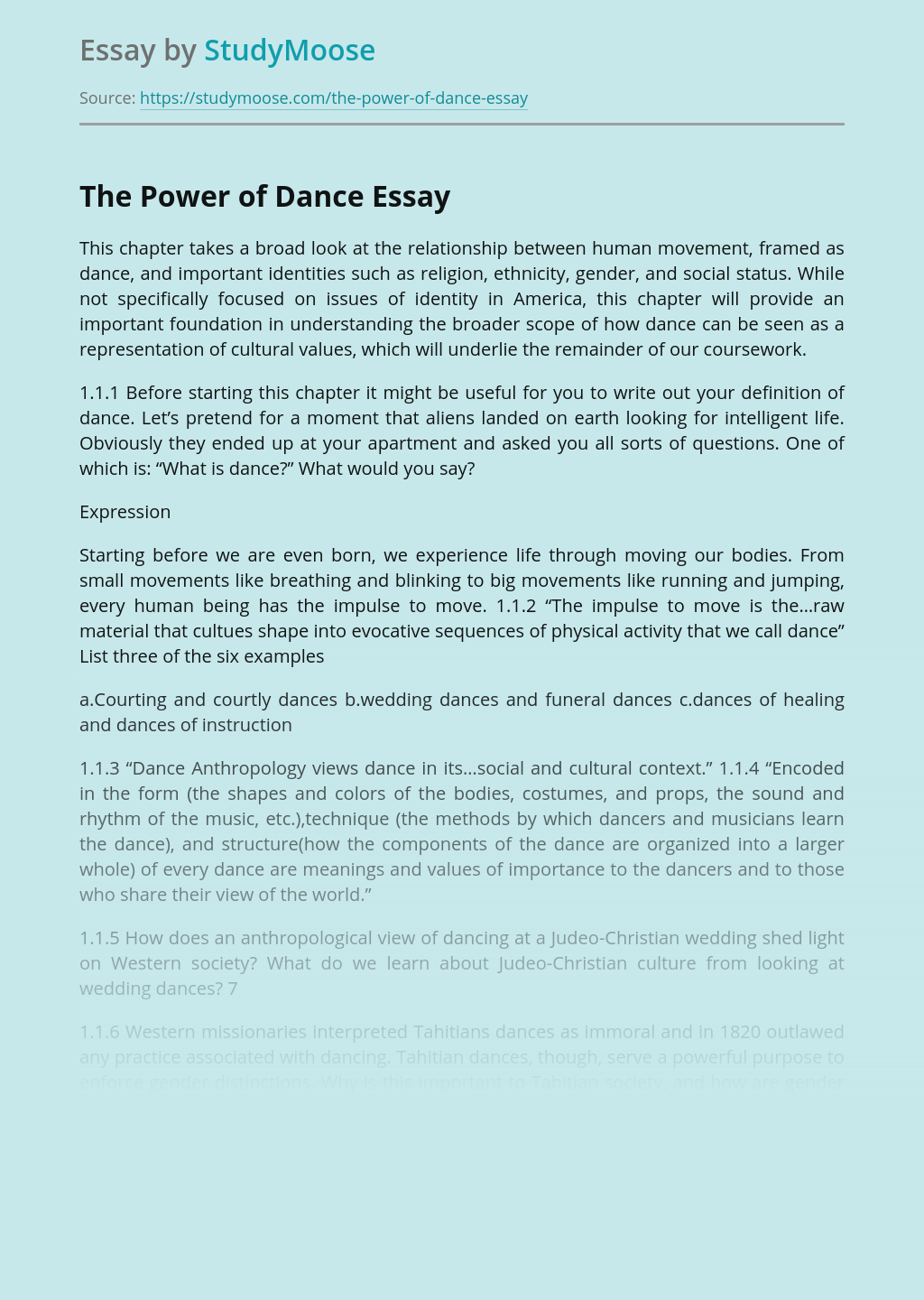 Turn in your highest-quality paper
Get a qualified writer to help you with
“ The Power of Dance ”
Get high-quality paper
Helping students since 2015
Stay Safe, Stay Original