The Postmaster by Rabindranath Tagore

“But Ratan had no such philosophy to console her. All she could do was wander near the post office, weeping copiously. May be a faint hope lingered in her mind that dadababu might return: and this was enough to tie her to the spot, prevent her from going far. Oh poor, unthinking human heart! Error will not go away, logic and reason are slow to penetrate. We cling (hug) with both arms to false hope, refusing to believe the weightiest proofs against it, embracing it with all our strength.

Turn in your highest-quality paper
Get a qualified writer to help you with
“ The Postmaster by Rabindranath Tagore ”
Get high-quality paper
NEW! AI matching with writer

In the end it escapes, ripping our veins and draining our heart’s blood; until, regaining consciousness, we rush to fall into snares (traps) of delusion (illusion) all over again”.

What was the philosophy that consoled the postmaster? Why didn’t Ratan have a philosophy to console her?

It was not that the postmaster did not feel occasional pangs of sorrow when he was leaving the village without taking Ratan with him.

He reconciled himself with the situation by musing (reflecting) that life had to go on regardless of the helplessness of the misery of the orphan girl for whom he was neither responsible nor accountable to the society or the world. He told himself that human bondage was after all a frail thing which was often broken by the hard realities of life.

But Ratan who was naive (immature) and impressionable (easily influenced), did not share her master’s philosophy. Being young, she was not yet hardened by the harshness of life and she was still hopeful that her dadababu might somehow return to give her shelter in the temple of his affectionate and kind heart.

What was Ratan’s hope? How would it help her?

Ratan hoped that her dadababu had ceased to be an employer and had become her own elder brother. This perception of the relationship between Ratan and the postmaster was but one sided and a delusion (fantasy). This the innocent girl could neither comprehend nor realise. She believed herself to be a member of the postmaster’s family and thought that her days of woe were over. She imagined herself to be in the citadel (sanctuary) of his dadababu’s kind and loving heart.

Ratan’s simplicity and blind faith did not help her in the least. This did nothing but cruelly tearing her heart into pieces. She finally sank in a sea of misery and unbearable agony. What actually happened to her was akin (similar) to a bleakness (isolation) which was darker than the darkest of nights.

Why does the author exclaim ‘unthinking human heart’? Why do we cling (stick) to false hopes?

Human hearts have a universality and the universality is that it is powerlessly fond of hope even when it is a false one. Human beings usually abhor (dislike) to take the path of logic. Clinging to unreal and improbable aspirations, they never fail to allow themselves to be struck by tragedy after tragedy.

We all grip false hopes because it is simply human nature. What human heart is mostly fond of is love but life being a very exacting (demanding) affair indeed, it rarely offers an acceptable solution to our miseries or woes. Yet, human nature is uncomprehending of this and so goes on clinging to false hopes.

The Postmaster by Rabindranath Tagore. (2017, Feb 05). Retrieved from https://studymoose.com/the-postmaster-by-rabindranath-tagore-essay 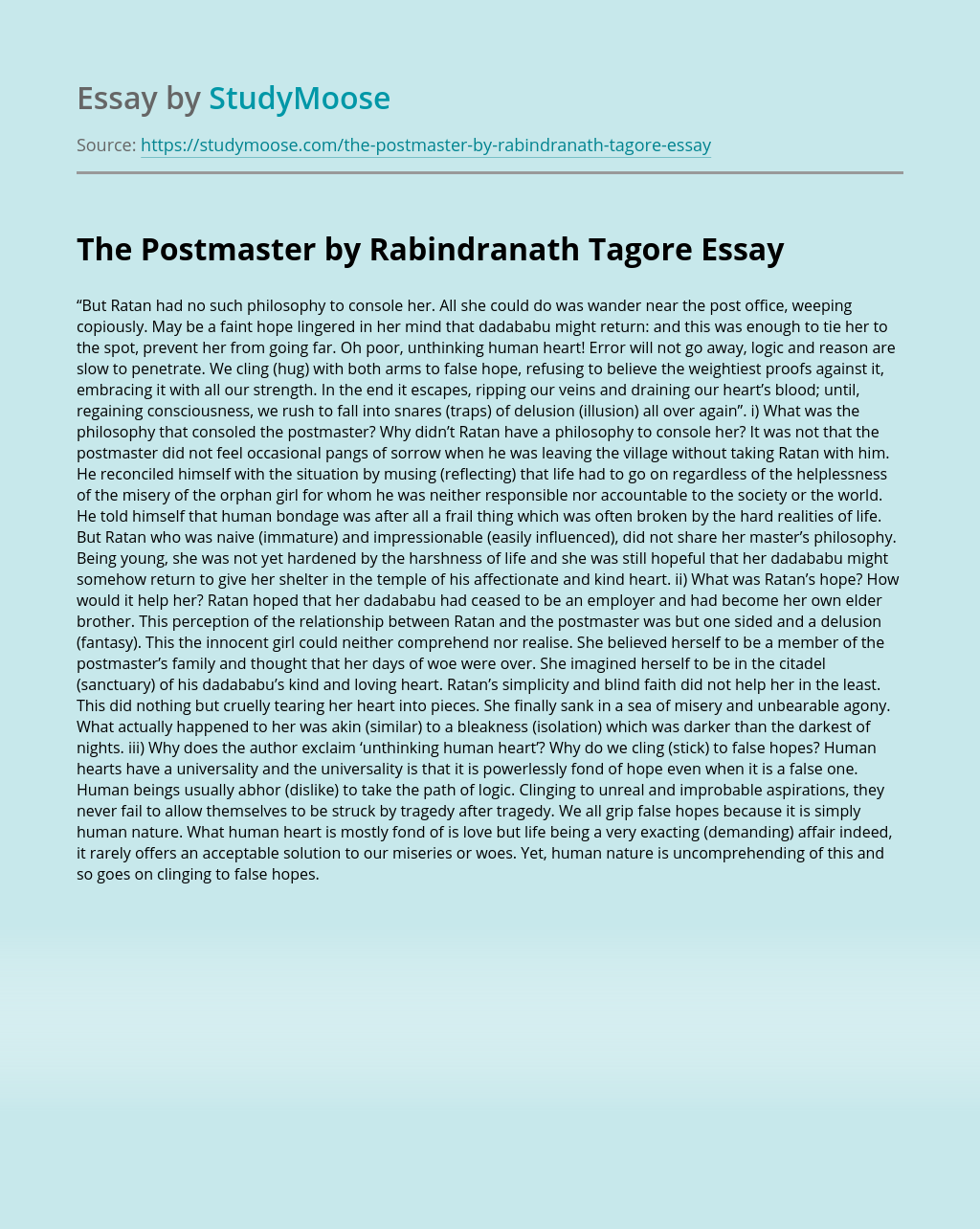 Turn in your highest-quality paper
Get a qualified writer to help you with
“ The Postmaster by Rabindranath Tagore ”
Get high-quality paper
Helping students since 2015
Stay Safe, Stay Original