The Positive Aspects of Neuroenhancing Drugs According to Margaret Talbot

The story that is being referencedis called “Brain Gain: The Underground World of ‘Neuroenhancing’Drugs,” by Margaret Talbot. Talbot writes this article to show the many positive aspects of Neuroenhancing drugs. She does this by interviewing two users of this drug and attempts to show the readers a new viewpoint on the topic. However, the evidence against Talbot’s viewpoint will become clear during this essay. Neuroenhancing drugs are shown to be minor fixes for not having enough time in the day, with minor side effects.

Don't use plagiarized sources. Get your custom essay on
“ The Positive Aspects of Neuroenhancing Drugs According to Margaret Talbot ”
Get custom paper
NEW! smart matching with writer

Talbot only discusses the negative side effects for a brief moment, so as to keep the readers looking at this drug in a positive light. In reality, these drugs cause long-lasting side effects, while there is no true evidence of improved classroom performance. They have been known to exacerbate symptoms of behavior disturbance and psychological disorders, and they negatively associate with cardiac abnormalities, among many other effects.

The risks of these drugs are not discussed in Talbot’s article, and they will have many large, negative impacts.

Adderall and Ritalin are becoming a common “helper”on college campuses. The ease of obtaining it legally comes down to only faking symptoms of ADHD: a sickness that is judged by a questionnaire in a doctor’s office. However, there is no way around the fact that Adderall is an amphetamine. It has the same classification as the illegal drug, cocaine (Chambers). This classification is because there is a large chance of addiction and abuse. The abuse is clear, even by reading Talbot’s article where she says, “4.

1 percent of American undergraduates had admitted to taken prescription stimulants for academic efficiency…at one school, the figure was 25 percent,” (Talbot 654). One can assume that 25 percent of that school’s students do not have ADHD. Any drug addiction causes long-lasting side effects.

As for the addiction aspect of this amphetamine, one could become addicted to the drug itself, or even just to the feeling of working faster. The real dangers of this addiction come when the students get addicted to their work ethic on this drug, and lose so much sleep that they are at risk of serious health effects. Also, if someone were to be addicted to this type of work ethic, and they suddenly have to stop due to their job, they will fall majorly behind. Additionally, the use of Adderall in anyone who has not completed growing can cause a suppression of growth and an unhealthy lack in weight gain (Chambers 2011). Along with this complication in weight gain, it can also cause a decreasing of appetite, mainly because of the fast-paced metabolism that is induced by the drug. In a study done by an anonymous clinic, 27 percent of users experienced regular insomnia as compared to 13 percent on nonusers, even when they stopped using the Adderall XR (Chambers 2011). Insomnia can lead to impaired memory, higher risk of falling asleep while driving, high blood pressure, diabetes, heart attack, or stroke.

In addition to the physical side effects that last long after the drug has worn off, the psychological side effects can be much more drastic. The purpose of Adderall, Ritalin, and other neuroenhancing drugs is to affect chemicals in the brain and nerves that contribute to hyperactivity and impulse control by over stimulating the central nervous system (Cerner Multum Inc. 2015). Because of this, people who use this drug that already have a fast-functioning central nervous system often experience fast, pounding heartbeats, anxiety, lack of sleep which causes stress, blurred vision, and twitching, and a false sense of well-being (Cerner Multum Inc. 2015). Psychotic episodes of loss of breath and hypersensitivity have been reported only when patients up their dosage themselves, or take it without a prescription. Talbot never mentions these, and she glosses over it when Alex says he experiences “days without sleep”, and then a crash after an anxiety filled week (Talbot 666).

The ADHD Awareness committee also reports patients feeling agitated or easily provoked when on this medication, with an 8 percent rise compared to people who do not take this medication (Chambers 2011). In another recent study done by the University of Zurich, University of Basel, and Swiss Federal Institute of Technology Zurich, 51.2% of the students admitted that when they stopped using neuroenhancement, they noticed relaxation. Additionally, 39.1 percent noticed a reduction in nervousness and better coping skills once they dropped this addictive drug (Maier et al 2013). Even in Europe, students use these prior to exams to work faster. The majority of users who notice psychological side effects do not report them, because they think that it is “all in their head” or, “less serious.” In reality, psychological illnesses and side effects are just as dangerous as physical ones, especially if they’re left untreated. In general, students do not see this drug as harmful because the side effects are more prominent in later years. One of the most prominent side effects includes cardiac problems. It can be expected that any drug that causes one to think faster, respond faster, and stay up late will cause heart issues.

The most common reported problems (by healthy individuals, as well as individuals with ADHD) are heart palpitations, tachycardia, elevation of blood pressure, sudden death, and heart attacks (Chambers 2011). While both groups of users experienced these problems, three percent more users who were healthy while taking this medication for school experienced it on average. Some users think that the heart palpitations mean that the drug is “working” because they are getting things done faster. For this reason, many users do not report that as a major side effect, as they believe that it just means their body is becoming enhanced to stay up late. Talbot does not touch on the cardiac problems that arise when using neuroenhancers. That is, however, the most serious possible side effect. It is often connected to anxiety and twitching, as the central nervous system is functioning faster than it normally would. These side effects are considered minor to students, as long as they can make their grades in time. However, other than the students comparing grades with one another, there is no actual proof of better classroom performance.

The use of neuroenhancers has more risk than reward. While these drugs improve focus and concentration, and thereby improve performance in class, this has not been shown to translate into improved school grades. Hall and Lucke, two professors who studied patterns of addiction, said, “a recent report from the British Academy of Medical Sciences concluded that there was very limited evidence for cognitive enhancement in healthy individuals and effects on vigilance, verbal learning and long-term memory were small under laboratory conditions,” (Hall et al 2010). Talbot’s article did not show the dangers of neuroenhancers. Therefore, the public use of these drugs by healthy individuals should be more strictly regulated, and these individuals prone to using it should be receiving education about the true risks.

With so many college students causing this drug to become popular, the education about risks and addiction should be taught more frequently on campuses. It is not possible to take these drugs to achieve better grades in college, and then simply cut them off. Talbot makes multiple points that show Neuroenhancing drugs to be helpful, easy to quit, and low in side effects. The addiction and risk of harmful side effects cannot be ignored. Her proof about how many college kids use it may make this drug seem safe; however, she never does a follow up on the long-term effects that these people have, nor does she go into detail about the risks involved. Graduating as valedictorian is nice, but if the graduates go onto their future job with high blood pressure, chance of heart attacks, twitches, anxiety attacks, sleep deprivation, and other major side effects, will neuroenhancing drugs really have helped the users at all?

The Positive Aspects of Neuroenhancing Drugs According to Margaret Talbot. (2021, Sep 27). Retrieved from http://studymoose.com/the-positive-aspects-of-neuroenhancing-drugs-according-to-margaret-talbot-essay 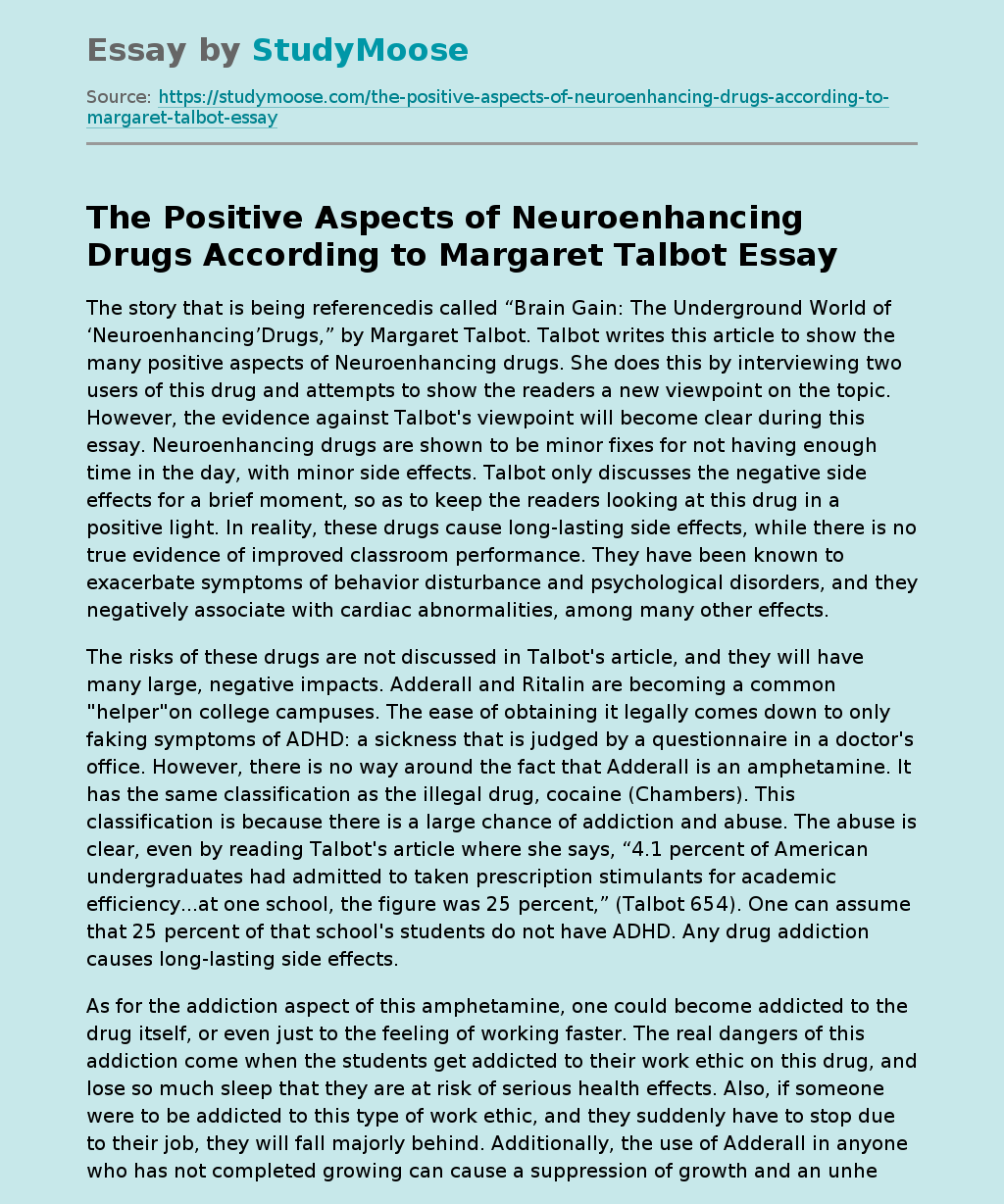