Emily Dickinson made a large influence on poetry, she is known as one of America’s most famous poets. With close to two thousand different poems and one thousand of her letters to her friends that survived her death Emily Dickinson showed that she was a truly dedicated writer.

Emily Dickinson was born in Amherst, Massachusetts on December 10,1830 to a prominent family, her father Edward Dickinson was both a lawyer and the Treasurer of Amherst College. Emily’s mother was Emily Norcross Dickinson.

Don't use plagiarized sources. Get your custom essay on
“ The Poet Emily Dickinson ”
Get custom paper
NEW! smart matching with writer

Emily had one older brother, William Austin and a little sister, Lavinia. She was educated at the Amerherst Academy, the institute that her grandfather helped found. She also spent a year at Mount Holyoke Female Seminary in South Hadley, but had left because she did not like the religious environment. For a woman of this time, this much education was very rare.

Emily Dickinson was a very mysterious person as she got older she became more and more reclusive too the point that by her thirties, she would not leave her house and would withdraw from visitors.

Emily was known to give fruit and treats to children by lowering them out her window in a basket with a rope to avoid actually seeing them face to face. She developed a reputation as a myth, because she was almost never seen and when people did catch a glimpse of her she was always wearing white. Emily Dickinson never got married but is thought to have had a relationship with Reverend Charles Wadsworth who she met in the spring of 1854 in Philadelphia.

He was a famous preacher and was married. Many scholars believe that he was the subject of her love poems. Emily probably only saw Wadsworth an additional three times after their first encounter which was only done by him going to Amherst, where she lived. In 1861 Wadsworth moved to San Francisco.

It is after this time that Emily really started to produce hundreds of poems. Emily Dickinson submitted very few poems to publishers. She felt that her poetry was not good enough to be read by everyone. Eight of her poems were published during her life time either by her friends who submitted them to a publisher without her consent or Emily Anonymously. (Emily Dickinson 1996,1) In 1862 she told a friend “If fame belonged to me I could not escape her…My Barefoot-Rank is better.”

It is also thought that Emily Dickinson had a passionate relationship with Susan Gilbert. Emily wrote three times more poems to Susan then to any one else. They probably met at Amherst. They became very close friends, they shared many similar interests and desires. Emily became very affectionate toward Susan and trusted her completely. Their relationship went sour when Susan became engaged to Austin Dickinson, Emily’s brother. For two years their friendship ended completely.

When Austin and Susan moved next door their relationship started over and Emily began to write her love letters to Susan again. Feminist scholars who have examined Emily Dickinson’s letters and poems to Susan from a lesbian viewpoint think that her letters and poems to Susan move beyond a romantic friendship to a blatantly passionate relationship. No one knows how Susan responded to Emily’s love letters and poems. When Emily died all of her letters from Susan were destroyed. So no one will ever know whether they did or did not have a love affair. I think that the mysteries of Emily Dickinson’s life is what makes her poetry so interesting because it can be analyzed in so many different ways.

Emily’s poems and letters to Susan could suggest an eroticism that could be intentional, subconscious, or merely coincidental. Emily may have had perfectly innocent intentions, but to modern audiences translated to be sexually suggestive. (Poetry of Emily Dickinson 1996,2) Other poems that Emily wrote were mostly about the exploration of the concept of religious faith. Her father was a very religious man who practiced a Protestant sect that closely followed the tenets of New England Puritanism, but she was never able to practice his faith with dedication. She was drawn to transcendentalism of Ralph Waldo Emerson, who was one of the leaders of this movement in the belief in the essential unity of creation, the goodness of humanity, and the supremacy of insight over logic and reason. This philosophy also taught a renunciation of authority, whether it be religious, scientific, or political.

These new ideals led her to think a lot more about life and it’s ultimate destiny. The concepts of good and evil, life and death and where you go when you die turned into an obsession with Emily which led her to spent a lot of time worrying about it and writing about it as her life slowly went by instead of enjoying life and living it to its fullest.(Sewell 1963,12) Although her obsession of death seemed to destroy her life, it allowed her to express her true genius through poetry this was the time when she created her greatest works. (Sewell 1963,15)

Emily Dickinson Died at the age of 55 on May 15 1886 in Amherst. Shortly after her death her sister Lavinia discovered hundreds of Poems in a locked chest in Emily’s room in her Amherst home. Lavinia persuaded M.L. Todd to edit Emily’s poems. He published a small portion of the poems in 1890, and his daughter and Emily’s niece followed with more poems later on. But because of a feud in the family, the entire collection of Emily’s poems were not published until 1955. (Olsen1990,91)

Here is an example of a couple of Emily Dickinson’s poems and what critics thought of them and what I think of them. The Chariot Because I could not stop for Death He kindly stopped for me- The Carriage held but just Ourselves- And Immortality. We slowly drove-He knew no haste And I had away My labor and my leisure too, For His Civility- We passed the School, where Children strove At Recess-in the ring- We passed the fields of Gazing Grain- We passed the Setting Sun Or rather- He passed Us- The Dews drew quivering and chill- For only Gossamer, my Gown- My Tippet- only Tulle- We paused before a House that seemed A Swelling of the Ground The Roof was a Scarcely visible- The Cornice-in the Ground- Since then- ’tis Centuries-and yet Feels shorter than the Day I first surmised the Horses’ Heads Were toward Eternity- (Benfey 1986, 83)

The “New Critics who were Allen Tate, R,P. Blackmur and Yvor Winters said this about “The Chariot” “If the word great means anything in poetry, this poem is one of the greatest in the English language. The rhythm charges with movement the pattern of suspended action back of the poem. Every image is precise and, moreover, not merely beautiful, but fused with the central idea. Every image extends and intensifies every other.”(Benfey 1986, 84). I really liked this poem I found her interpretation of death very interesting and that it was very easy for me to create an image of death using her perfectly placed adjectives.

She was very descriptive, but not to the point that you loose focus on the poem. Making the trip to Eternity with a carriage and horse I found to be a very interesting concept. I also liked this poem because it is not too long like other poems that bore me, She gets right to the point and keeps your attention through out the whole poem. Remorse-is Memory-awake- Her Parties all astir- A Presence of Departed Acts- At window-and at door- Its Past-set down before the Soul And lighted with a Match- Perusal-to facilitate- And help Belief to stretch- Remorse is cureless- the Disease Not even God-can heal- For ’tis His institution-and The Adequate of Hell- (Benfey 1986,68) Benfey says about this poem that ” Death is the ultimate mystery for Dickinson; no matter how wise we are, through a riddle at the last,/ Sagacity must go. She can try to ward off the horror with a glib definition: Death is the Suitor/that wins at last, whose stealthy Wooing is pursued by pallid innuendoes. Even when she is wondering about the resurrection she can be witty and playful.” Benfey 1986, 68)

I think that this poem is very deep in meaning and makes me think a lot about the after life. With great poems about death like this it is obvious that Emily Dickinson Spent a lot of time focusing on the concepts of death, Religion and the after life. She in this poem interprets the Resurrection in a different way. I think that she is saying that Death is inevitable in this life as we know it and that even Jesus could not cheat death even though he was able to come back to Earth in a new body. He still had to die like all humans and creatures to reach life after death. “Wild Nights-Wild Nights” Where I with thee Wild Nights should be Our luxury! Futile-the Winds- To a Heart in port- Done with the Compass- Done with the Chart! Rowing in Eden- Ah, the Sea! Might I but moor- Tonight- In thee! Her breast is fit for pearls, But I was not a Diver- Her brow is fit for thrones But I have not a crest. Her heart is fit for home- I- a sparrow- build there II- Sweet twigs and twine III- My perennial nest. Her sweet weight on my Heart a Night Had scarcely deigned to lie- When, stirring, for Beliefs delight, My bride had slipped away- If ’twas a Dream- made solid – just The Heaven to confirm- Or if Myself were dreamed of Her- The power to presume- With Him remain- who unto Me- Gave- even as to All- A fiction superseding Faith- By so much-as ’twas real- (Poetry of Emily Dickinson 1996,3)

Benfey says that this poem is ” elegant and has a mild eroticism that reaches the level of great art in Emily Dickinson’s poetry”(Benfey 1986,62) Feminist Scholars looking at this poem from a lesbian point of view feel that Emily Dickinson had a passionately intimate relationship with Susan which is who she wrote the poem to and that Emily depended on Susan’s love.(poetry of Emily Dickinson 1996,2) I do not agree with the Feminist Scholars, I don’t think that this poem is sexual or passionate toward Susan. I think that back when Emily Dickinson was writing her poetry people were a lot more open with their feelings and were not afraid to express them although I do think that Emily had a very strong love for Susan. This is a great poem because it shows the sensitive loving side of Emily’s poetry, instead of the depressing gloom of death and worrying about it. I think that this poem has been misinterpreted to mean something passionate and sexual. Now a days it seems that people are always trying to find something sexual in everything. 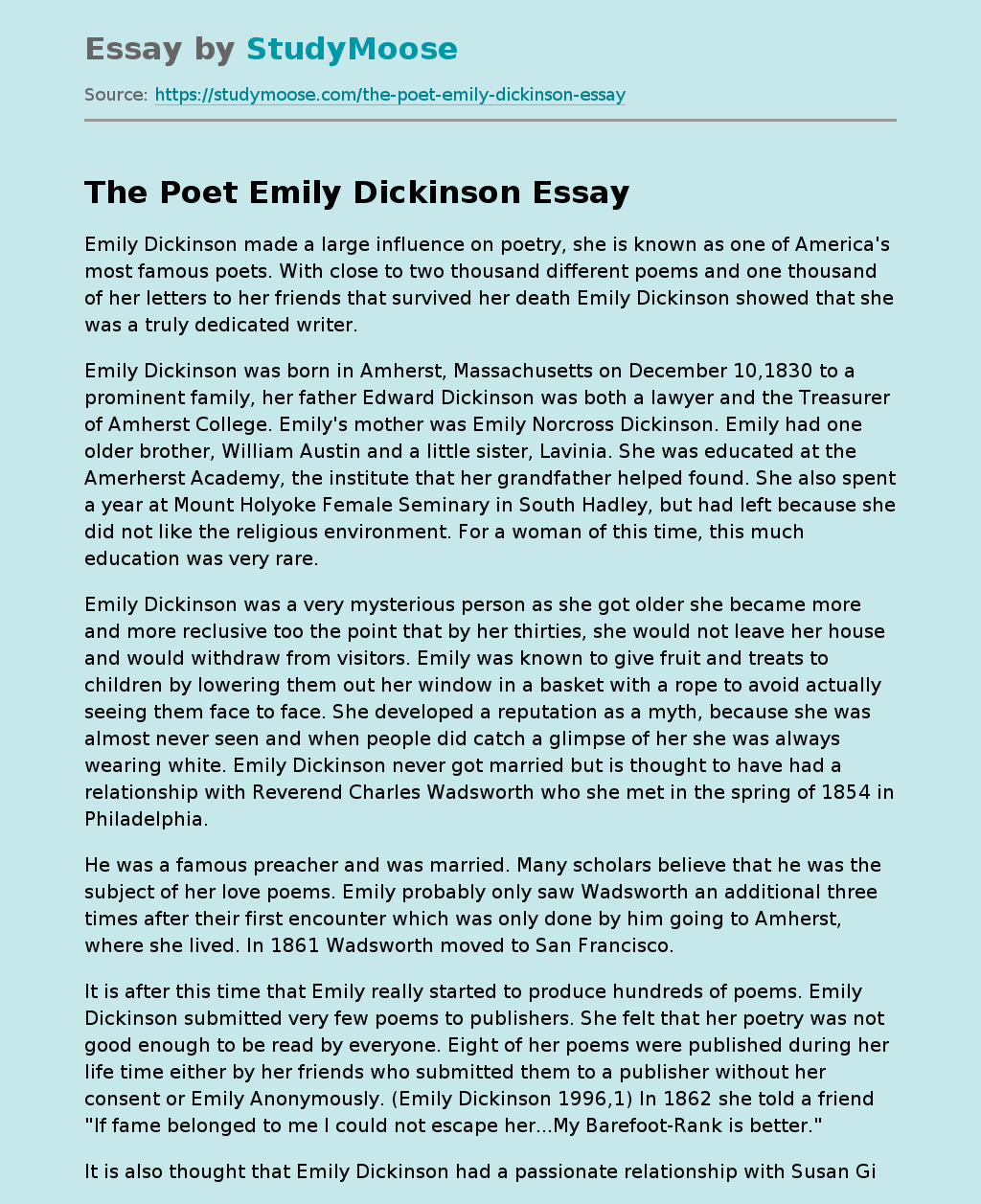