The Physics of Car Safety Systems

By changing an object’s momentum, we are able to move it either faster or slower, and eventually to a halt, depending on the amount, direction, and magnitude of the force that acts upon the object. By applying this aspect on a car’s safety systems, we are able to either reduce the risks of injuries as the results of a crash, or to avoid a crash completely. It is with this principle that seatbelts, crumple zones, air bags, and braking systems, among other features, are able to save us from such unfortunate events.

Don't use plagiarized sources. Get your custom essay on
“ The Physics of Car Safety Systems ”
Get custom paper
NEW! smart matching with writer

In America alone, seatbelts have saved an approximate of 13,000 lives each year. Furthermore, an estimate of 7,000 fatalities could have been helped if the passenger had worn a seatbelt during the event of the crash. Although at times wearing a seatbelt during a drive could result in seatbelt-caused injuries likely around the sternum area and perhaps even death, the risk of going without far outweighs the risk of the injuries caused by the seatbelts.

By the law of inertia, when a car crashes (i.e. decelerates rapidly) the passenger will continue to move at the same speed until a force acts upon them to cause deceleration.

There is a stopping force. If said passenger flies out the windshield onto the tarmac, the windshield would apply considerable force upon passenger’s head (Newton’s second law), and would cause death or injury, and the tarmac would then apply more force to the body. A seatbelt spreads force to the less vulnerable sections of the body, and in a longer space of time because of its flexible material (compared to the sturdy windshield).

Since the belt applies force on a wide range of the body, less pressure would be involved, and the passenger would experience less pain. The seatbelts are also designed to stop the passenger from moving forward too much in the event of a collision, because this may let the passenger collide with the wheel instead. By having more time and the same amount of momentum requires the force applied to the passenger’s body would be less excruciating and deadly. Brakes – passive safety features

Brakes are the epitome of a car’s safety. Not only is it essential to control the car, it will also reduce the dangers of a collision, if it is utilised. In most cases, people survive or avoid collisions in part because of brakes. The common brake operates using a hydraulic system, taking advantage of the hydraulic force multiplication, which multiplies the force of the driver’s foot against the pedal, causing a larger amount of force exerting on the break, depending on the sizes of the pistons used in the system. Then, using the force of friction, the brakes would cause the wheels to decelerate, which in turn slows the whole car down. By reducing the velocity of the vehicle, the momentum would also decrease. This will reduce the fatality of a collision, or, more desirably, reduce the chances of a collision occurring in the first place. Safety glass for windshields – active safety features.

In 1919, Henry Ford founded the safety feature of laminated glass. Unlike previous materials, this glass does not shatter wildly, rather staying together, reducing the risks of injuries caused by shards of glass. The mainstream manufacturing of laminated glass for windshields began in 1927. It works with a layer of plastic in between two or more layers of glass. When the glass breaks, this layer of plastic called polyvinyl butyral will hold the glass together, preventing them from flying away into a passenger’s jugular. Multiple layers of this plastic on glass may even be powerful enough to stop bullets of certain calibres. In the event of a crash, the windshield would also have its own inertia. Without lamination, the glass would shatter just as a window would. The glass layers apply force to the plastic, which then applies an equal amount of force on them. This force holds together the shards, making them stick with the plastic. By keeping them from flying off, the momentum of the glass shards is reduced to minimum amounts, keeping the passenger safe from the shards. Airbags – active safety features.

Airbags has, statistically, reduced the chances of morality in accidents involving cars by as much as thirty percent. Airbags are commonly located on steering wheels, in front of passenger seats, on the seats themselves, in the doors, the knee areas, and even outside, near the windshields, to partially protect pedestrians who may have been hit by the vehicle.

As mentioned, a person or object involved in a crash would continue to move at the same velocity unless there is unbalanced force acting on the object for an extent of time. This force, in this case, is supplied by the airbags. By Newton’s second law of motion (for every action there is an equal and opposite reaction), when a person exerts their velocity on an airbag, the airbag would exert an equal amount of force against the person’s velocity. This gradually decreases the person’s velocity and momentum, which in result blunts the collision and risks of death or physical injury. Crumple Zones – active safety features

Crumple zones, also known as ‘crush zones,’ have evidently been a crucial part of a car’s safety features. They are designed so that they will crumple upon impact, which means that it absorbs some of the energy in the collision; it may look like a severe accident, but the passenger has a higher survival rate because of the crumple zone’s destruction.

When the crumple zone is squashed between the car’s body and the object it crashed against, the material exerts force both ways. This then results in a slower, less destructive deceleration, give the equal amount of momentum and velocity reduction and the longer amount of time it has to come to a halt.

The Physics of Car Safety Systems. (2016, Oct 27). Retrieved from https://studymoose.com/the-physics-of-car-safety-systems-essay 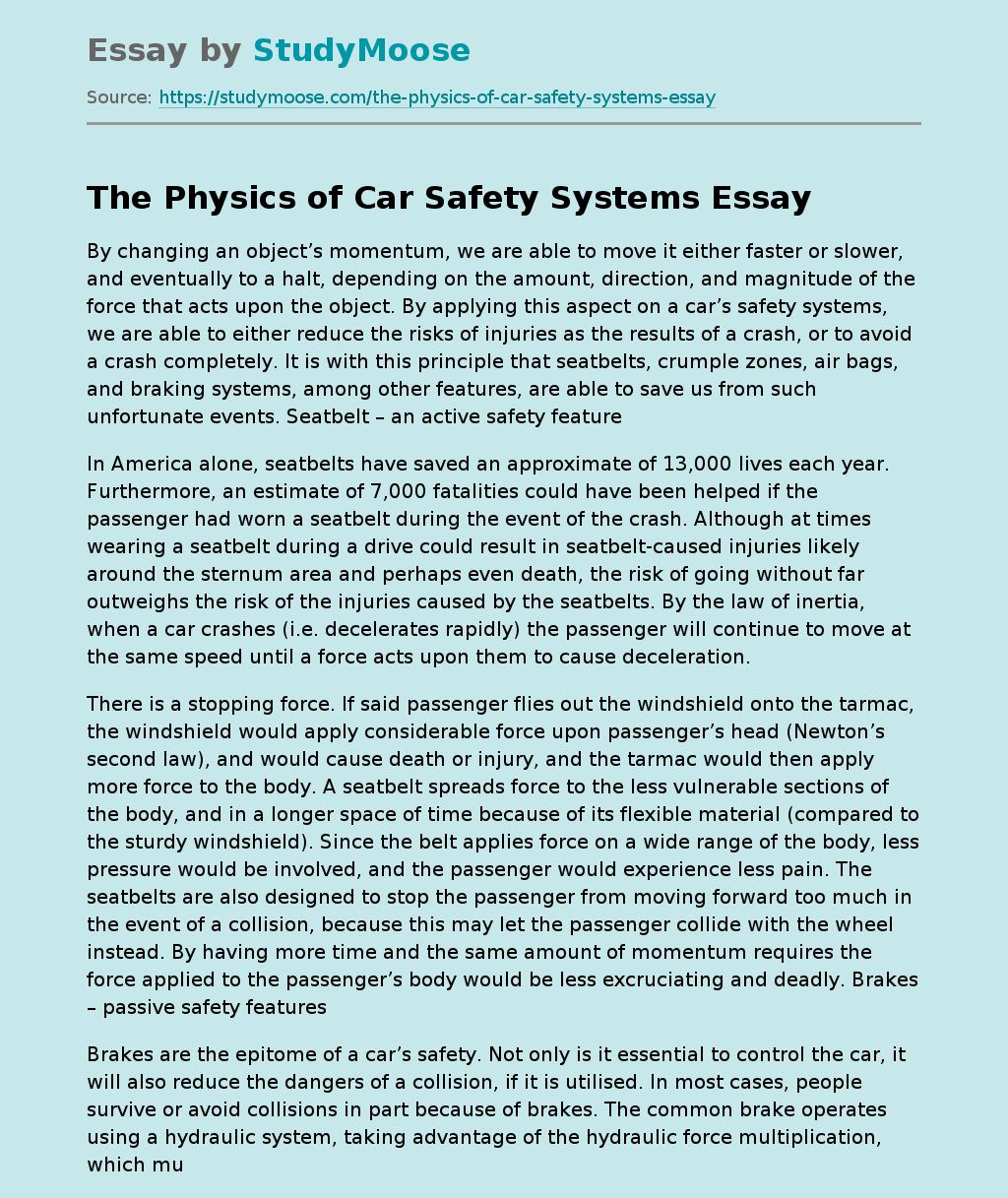