Turn in your highest-quality paper
Get a qualified writer to help you with
“ The Philippine Constitution – Political Dynasty ”
Get high-quality paper
NEW! AI matching with writer

The title is product of my out of the box philosophizing about the provisions of Section 1 and Section 26 taken together of Article II of our Constitution. I must say that philosophizing does not tell us my conclusions and/or thoughts are right or wrong, true or false, but it has certainly given me the basis upon which to present my meta-understanding of Section 1 and Section 26: Article II, Section 1 says: “The Philippines is a democratic and republican state.

Sovereignty resides in the people and all government authority emanates from them.

” This is the most basic principle of the Constitution, and it refers to a natural law as formulated and accepted in the mind; it refers also to essential truth upon which other truths are based. Article II, Section 26: “The State shall guarantee equal access to opportunities for public service, and prohibit political dynasties as may be defined by law. ” This is a policy built upon the principle of Section 1, and it refers to a planned line of conduct in the light of which individual decisions on political dynasties are made and coordination is achieved.

The policy of Section 26 is built upon the basic principle of Section 1. Moreover, the fundamental principle of Section 1 remain fixed and permanent, but policies of Section 3 can be are modified or repealed by legislation to suit the needs and demands of the times. The People: The Creators and Masters of Political Dynasties The phrase – “sovereignty resides in the people, and all government authority emanates from them” – clearly shows that the people are the habitat of the sovereignty.

However, “people” have two distinct yet mutually complementary meanings, namely, “people as electorate” which is the source of political power of elected politicians and “people as corporate nation” which is the reason for being of elected politicians. These “dual meanings of people” effectively signify that the elected politicians are “public servants” of the people; hence the people are their “boss and master” in our democratic and republican state, not the way around By virtue of their sovereign power, the people are superior to any and all existing political dynasties, whose reason for being is service to their masters, the people.

On moral grounds, the people must be awakened to the reality that they are the boss of political dynasties, and therefore they have no reason to fear the, before, during, and after political elections. Centrality of Morality in the Constitution The centrality of morality to our Constitution is evident in the Preamble, in the imploration to Almighty God for aid to build a just and humane society and to establish a Government that shall embody the Filipino ideals and aspirations and promote their common good under a regime of truth, justice, freedom, love, equality, and peace.

The rest of the Constitution revolves around these moral ideals and moral values. These are the moral foundations of the Social Ethics Society. There are socio-economic phenomena in many areas of the country where the life-style and the exercise of political power by political dynasties is betrayal of public trust, because it is not in accord with the following moral imperatives and criteria of right and wrong in public service: “Public office is a public trust.

Public officers and employees must at all times accountable to the people, serve them with utmost responsibility, integrity, loyalty, and efficiency; act with patriotism and justice, and lead modest life”. (Article X on Accountability) Every elected politician in the public service is bound to abide by those mandates. Congress had passed anti-graft and anti-corruption laws, e. g. RA No. 6713, also known as Code of Ethics for Government Officials and Employees, in the public service. However, it appears that many of our elected politicians pay only “lip service” to anti-Graft and Anti-Corruptions laws.

For instance, there are widespread phenomena of bribery and corruption in the public service, reportedly perpetuated by corrupt politician, many of whom are allegedly members of political dynasties. Centrality of Morality to Legality The Preamble provides the moral grounds and the foundation of ethical politics of several Articles of the Constitution. No statutory law is enforceable if it is unconstitutional; and the Constitution cannot be enforced if it is immoral. The bottom line – any enabling law on political dynasty is legally binding upon the Filipinos, only if it is constitutional and moral.

A law that is moral is always constitutional, but a law that is constitutional is not necessarily moral. A Moral and Ethical Proposal I believe the policy of Section 26 which “prohibits political dynasties as may be defined by law” has two distinct opposite sides, (1) “the letter of the Constitution” which is the legalistic side, and (2) the “spirit of the Constitution” which is the ethical side. The pro-political dynasty advocates and promoters behave in accord with legal politics.

When there is a conflict between a principle and its policy, the principle should prevail over its policy. Moral, Ethical, and Legal Practices in Politics Moral and ethical are similar in meaning in that they both have to do with the difference between right and wrong. They are dissimilar in meaning in that ethical tends to refer to a code, system, theory, or standard of judging rightness or wrongness of moral behavior; whereas moral tends to refer to more concrete choices and issues that arouse strong feelings.

In other words, moral refers to good and evil, while ethical refers to right and wrong. Because of the untruthful disclosure of his SALN per Code of Ethics, former SC Chief Justice Renato Corona was found ethically wanting for which he was impeached, despite his superior legalistic knowledge of law; Hence, we could say that “what is moral is always ethical, but what is ethical is not necessarily moral. ” Hence, when an elected politician acts according to RA 6714, his behavior is ethical as well as legal – “what is ethical is always legal, but what is legal is not necessarily ethical”.

The Pursuit of Ethical Politics Our major problem in the pursuit of ethical politics is the lack of political will on the part of the people as electorate. Let us awaken and educate their political consciousness, and empower their political will by making them conscious of their being the political dynasty that is superior over all existing political dynasties of oligarchs” per mandate of Article II, Section 1 that the people are the habitat of sovereign power, but the exercise of such pwer is delegated and vested upon elected politicians.

Assume that Congress would never pass the law enabling the policy against political dynasties; let us then resort to the principle of Section 1 in Article II. This principle does not require any enabling law because it is precisely the ultimate basis of all enabling laws. This is the principle why the political candidates try to win the votes of the people during political campaigns. We have indeed laws prescribing the requirements of the policy to vote. The Social Ethics Society can start the movement to marginalize the political dynasties,, if not altogether eliminate them eventually from the political landscape of the Philippine. 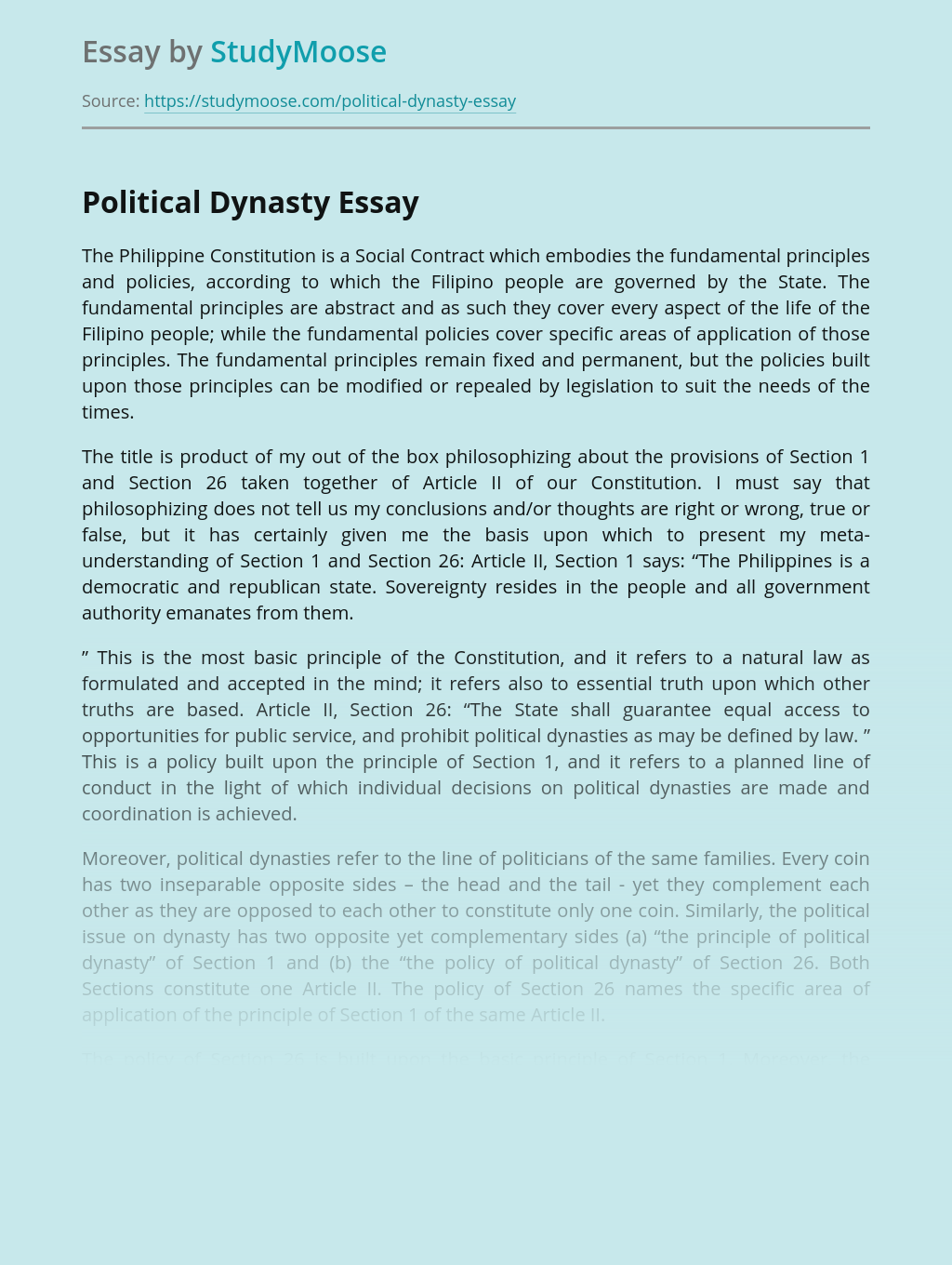 Turn in your highest-quality paper
Get a qualified writer to help you with
“ The Philippine Constitution – Political Dynasty ”
Get high-quality paper
Helping students since 2015
Stay Safe, Stay Original