"The Painted Door" By Ross Sinclair

Ross Sinclair used, the literary device, irony in many ways throughout his short story “The Painted Door.” This short story takes place in the great depression of the 1930’s in Saskatchewan during a horrific blizzard. Two of the three characters, Ann and Steven, are the main cause of most of the irony expressed in this short story. The irony is what makes this particular short story so tragic and dramatic. There are several examples of irony that dramatically affected the mood to be found throughout this entire story.

Don't use plagiarized sources. Get your custom essay on
“ “The Painted Door” By Ross Sinclair ”
Get custom paper
NEW! smart matching with writer

The first example of irony that sets the mood of this short story, was how it was John who had invited Steven over to play card and to keep, his wife, Ann company while he was away helping out at his father’s farm. Little did John know it would turn out that Steven and Ann sleep together. Therefore giving this story an unenthusiastic mood to start off with.

The second example that had an effect on the story significantly is how Steven continuously was trying to convince Ann that John would [http://www.

Proficient in: The Painted Door

youtube.com/watch?v=5u7t0TuAnKU] not be coming home that evening, even despite the fact that Ann tells us he has come in every storm in the years previously. The irony is that John kept his word just like Ann had said he would, but although she knew the truth by saying these things about John she still slept with Steven.

The third example of irony is how Ann comes to realize how John was the only man for her.

It took her having sex with Steven for her to grasp it was John she loved not Steven. This is ironic for the reason that in the beginning of this short story Ann kept complaining about John’s looks and way of doing things, and complimenting on how different Steven not only looked but acted. With time it turns out that in the conclusion Ann is not able to be with John because of her decision to sleep with Steven.

The fourth example of irony is how Ann painted the woodwork on such a miserable day. With cold drafts coming into the house it is shown that the paint won’t dry for quite some time. It was ironic that when Ann is given time alone with her dead, frozen husband, she sees a spot of paint on his hand, consequently showing that John had seen Ann and Steven in bed together. The irony of this is that she wouldn’t have known John had seen them together in bed, and Ann might have been able to live with a less of a guilty conscience , feeling irresponsible for her husband’s demise by not knowing he had come home or even come to the bedroom.

These are the several of the examples of irony that had affected this short story dramatically. This short story, “The Painted Door,” by Ross Sinclair was written in the 1930’s during a harsh Saskatchewan blizzard. Ann and Steven are the ones who are the cause Johns death because of a farm wife’s loneliness and a neighbours feelings or lack there of for her. With out the irony in this short story it could not have had such a tragic and dramatic conclusion.

"The Painted Door" By Ross Sinclair. (2016, Jul 02). Retrieved from https://studymoose.com/the-painted-door-by-ross-sinclair-essay 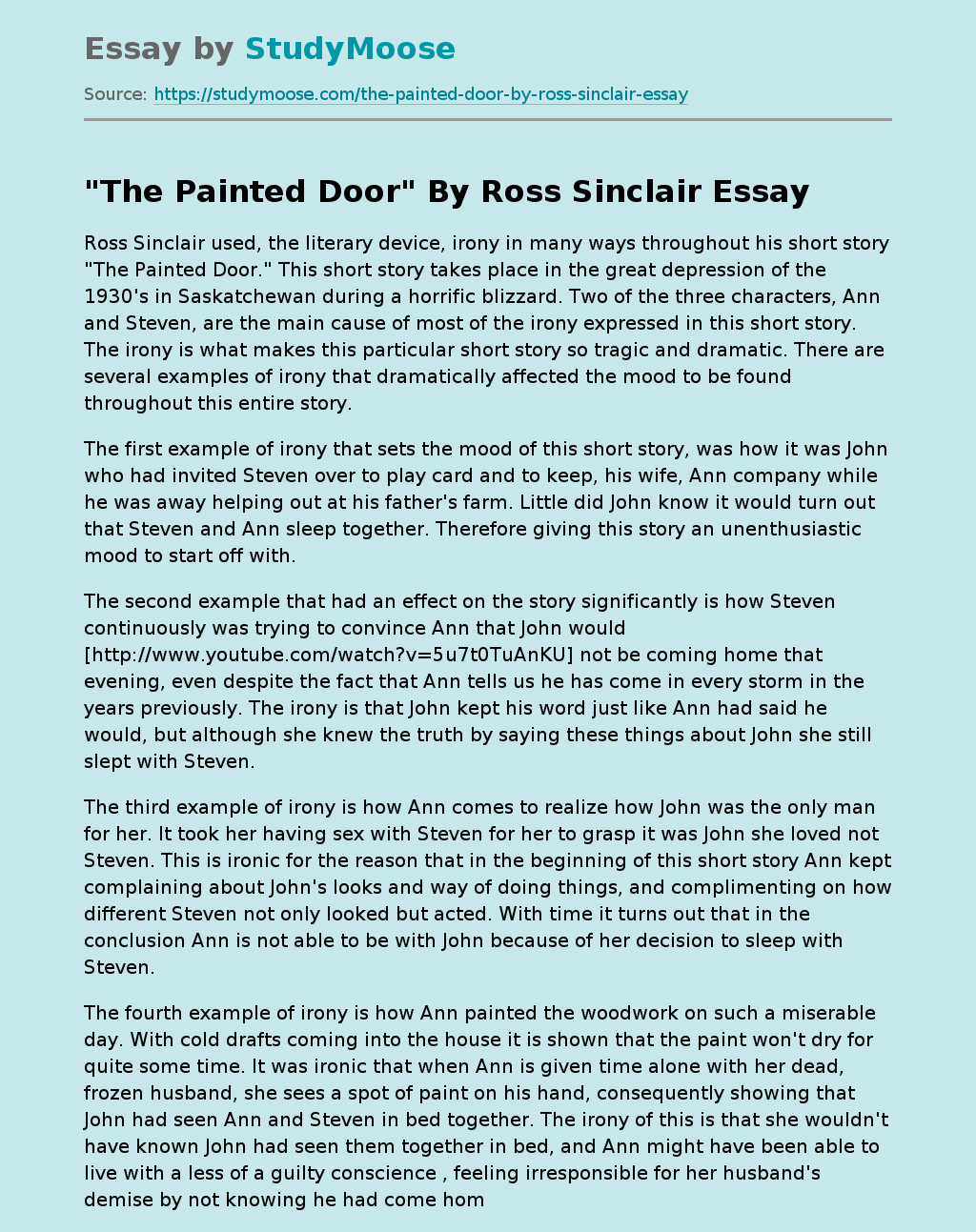