The Pacific Forum region seeks a region of peace, harmony security, and economic prosperity. The diversity of its peoples seek value, honor in their cultures. The Pacific Region’s objectives include obtaining respect for its governance, sustainable management of its resources and its democratic values. The partnerships with their neighbors, to improve communications and secure a sustainable economy for all are the primary objectives for its members. Established in Bangkok, Thailand on August 8, 1967 the Association of Southeast Nations (ASEAN) was founded by Indonesia, Malaysia, Philippines, Singapore and Thailand.

Don't use plagiarized sources. Get your custom essay on
“ The Pacific Forum ”
Get custom paper
NEW! smart matching with writer

Positive Influence of the Asean-China Free Trade Agreement January 10, 2010 marked a ten year negotiation with China, when the ASEAN-China Free Trade Area Agreement became effective. Tariff reductions between China and six ASEAN members Malaysia, Brunei, Indonesia, the Philippines, Singapore and Thailand, will experience more than a 90 percent of products with a drop to near zero in both parties’ tariffs. The agreement was established with the idea that ASEAN countries’ natural resources and China’s large market would both benefit (Shamsi, 2010).

Countries like Cambodia and Laos will benefit from the ASEAN-China agreement with zero tariffs on over 7000 goods from China, which will benefit these under developed countries tremendously. Less developed countries especially those with no stock market system will welcome this agreement and benefit greatly (Shamsi, 2010). The ASEAN-China Free Trade Agreement is China’s first free trade agreement and the first negotiated agreement ASEAN has been involved in with another country. The importance of this agreement will be seen when ASEAN nations being to use China’s currency Yuan.

This can drive China’s Yuan to become a major global trading currency. This agreement is important in the movement for the regional economic environment (Shamsi, 2010). Negative Impact of the ASEAN-China Free Trade Agreement The economic head of ASEAN is Indonesia. The idea of the ASEAN-China Free Trade Agreement is not beneficial to ASEAN countries and should be re-considered. Indonesia has pointed out that the economy of China has recently increased and become powerful in global terms.

The exemption from custom duties for Chinese goods ill challenges the local business survival with an influx of less expensive Chinese goods (Shamsi, 2010). Bankruptcy is a real possibility for industrial areas in the small and medium sized zones according to the chairman of the Indonesian Young Entrepreneurs Association. The automotive industry in Malaysia is also wary of this agreement in that the impact on local auto industries could be hit hard. The view from many ASEAN members is that the agreement much more benefits China than the ASEAN countries.

China in size alone has a large market for domestic consumption and ability to export on a grander scale than that of ASEAN countries (Shamsi, 2010). The overall feelings in most ASEAN countries are that of mixes feelings, but mostly worry concerning the agreement. The population of China with 1. 3 billion people compared to the 600 million combined of ASEAN region is notable differences in terms of markets. The concept that took ten years to come to light, seems that with the changes seen in the economy of China, that the agreement still has the same fruitful benefits initially anticipated (Shamsi, 2010). 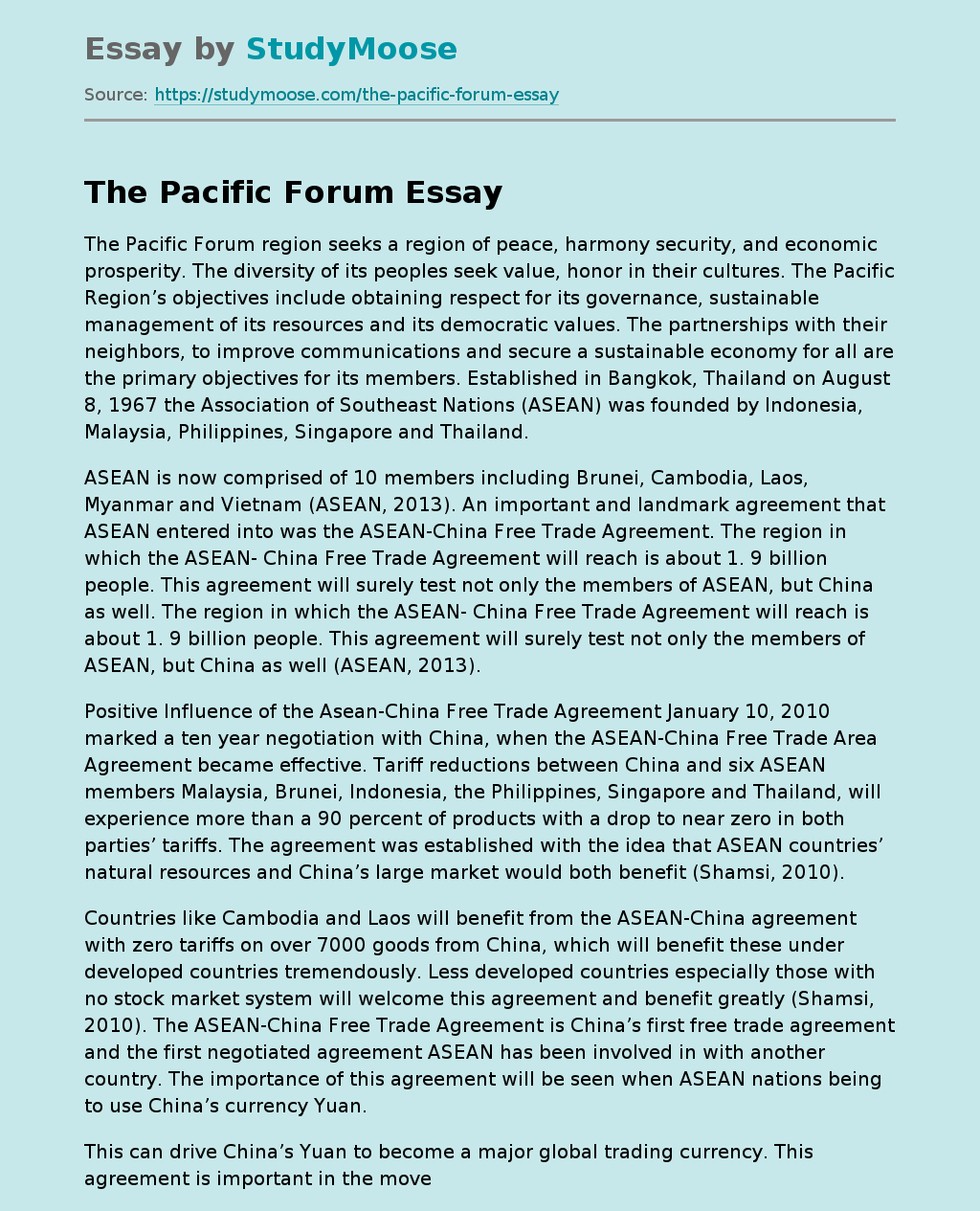