The Origins of the Cuba Revolution Reconsidered

The focal point of this paper is to present a critical appraisal of the scholarly contribution of Farber’s book, `The Origins of the Cuba Revolution Reconsidered’. Purpose of this review is to evaluate the contribution to historical knowledge that the book makes. Additionally, the review would convey the readers what ongoing scholarly debates and issues, if any, the book in question addresses.

For this reason a brief sense of what the debate was before the book was written would also be presented.

Don't use plagiarized sources. Get your custom essay on
“ The Origins of the Cuba Revolution Reconsidered ”
Get custom paper
NEW! smart matching with writer

Alongside it would be made sure to place the book not only in the context of prior scholarships on the Cuban Revolution, but in the context of ongoing debates about the major questions regarding the history of communism such as leadership and political balance.

The Origins of the Cuban Revolution Reconsidered (Envisioning Cuba) by Samuel Farber was published in March 13, 2006 by the scholarly article publishers The University of North Carolina Press. This 232 page paperback is a wonderful piece of text and can be regarded as a most important input to the pasture of Cuban learning.

This book looks into the decisive period of Cuban history i.e. 1959 – 1961. This book analyses the moments of Cuban Revolution and the author Samuel Farber defy the basic prevailing intellectual and accepted outlooks relating to the Cuban Revolution along with its historical trajectory, shape and source.

The author Samuel Farber uses a very different view of the entire process of revolution. The usual perception about this revolution is situated on the ideal that this particular revolution and its leaders are just a retraction to socioeconomic or domestic conditions and policies of the United States government.

Farber made a motion against this thought process and established the fact that the leaders of the Cuban Revolution had to work under difficult situation with multiple stratus of limitations to achieve what was their sovereign ideological visualization of political appreciation. These people were independent of any huge political backing and most of time the procedures also lacked or executed not according to their initial master plan.

Before we indulge into the details of the book it would be better to provide a brief background of the historical events which is basically the backbone of the understanding of the text. The Cuban revolution is believed to be one of the most important aspects of communist movements of the 20th century.

However, it should be mentioned that the leader of the revolution Fidel Castro had little to do with communism or Marxism as a whole but the fact remains that their movement was directed against a government that was backed by the United States. Thus once the revolutionists were against the US backed government of Fulgencio Batista it was implied that they belong to the communist camps.

This thought process influenced the US government to become hostile towards the revolutionists and as a result they were compelled to seek refuge under a camp that stands on the opposite hemisphere of the US. They found such a camp among the communists, particularly the Soviet Union. Thus what was a revolution to overthrow a dictator soon became a part of the communist camp and was manifested in that way by both the US and the Soviet camp. (Lamb, 203-206)

The author Samuel Farber explores this conflict of history between Cuban and US interest with detailed tone and reaction of leaders of both the nation after liquidation of the dictator Fulgencio Batista. According to the author it was the specific form of politics and state of economy of this island nation that was mainly instrumental for the economic and social change during the initial pat of the 20th century. It as evident that under the dictatorship of Fulgencio Batista Cuba was becoming a colonial state under the United States and the conclusion would have been in a similar fashion through arm struggle. Only in this case a country far off the coast of Cuba got involved in the form of Soviet Union and complicated matters in the political arena.

The author Samuel Farber however, looks into the fact files of the period with the help of de classification of documents that are only recently made public by both the Soviet and the United States which narrated the political developments of the time. His main source of formulation of his thesis is based on these documents. Farber also relied on numerous Cuban narratives and biographical literature. The end result of his analysis zeros in on basically three major years and with the documentations and formulations of these three years 1959, 1960 and 1961 Farber explains the development of the Cuban revolution and the fast expansion of this movement.

He depicts the rebellion to be emerging from a basic state of anti-dictatorial and multi-class movement into a well organized and ideology based struggle and what started as general agitation soon became part of a world wide mass social revolution. In fact, this is the prime concern of this book and this is the pursue of the author as the nature of the development of the revolution and the cause is found to be at the grass root level of the Cuban society during the 1950s which provoked him to write this book.

His ideals about the time are well reflected on the very first sentence of the book where he pulls out the vital question that “did the economic conditions prevailing in Cuba during the 1950s encourage the development of a political climate conducive to a radical social revolution?” (Farber, 1) It is but an obvious statement that Farber found his answer where he assumed to find it- in the economic condition of the island during that time frame.

It was essential for the author to establish this thesis and for that he needed all the backing possible. For this purpose he explored the anti communist movements and communist witch hunt of the United States, development of Fidel Castro and the movements and organizations in the Soviet Union. He considered the overall aspects of the Latin America continent with all its cultural aspects and volatile political situations.

The state of the Cuban Communists was also taken into consideration along with the detailed transactions of the State Department amidst the building of the Cold War where it was felt that the signs of the Third World were looming overhead. Farber looked into the aspects of the Sierra Maestra with details of the Bolivian Revolution as a follow through of the Cuban revolution in the context of the National Security Council.

However, it was important for the author to pay an overall attention to all aspects of that timeframe at the region and the overall political conditions of the western and eastern hemisphere at the same time. For this purpose he studied in details the aspect and influence of Platt Amendment, Ambassador Bonsal and Directorio Revolucionario. He also paid keen interest on the weight and political determination of Camilo Cienfuegos with equal relevance to Partido Socialista.

The aspect of Santiago de Cuba and the Bay of Pigs comes naturally with the movement and aspiration of the Cuban revolution and so the indication of Cayo Confites becomes important too and is given thorough importance by the author. The policies of President Eisenhower are also taken into well evaluation for determination of the political structure of the Western Hemisphere during the time and the cause and the nature of the revolution.

In conclusion it would be relevant to mention that The Origins of the Cuban Revolution Reconsidered (Envisioning Cuba) by Samuel Farber is a very important book for every student of Latin American studies. Further ore it can be stated that the various aspects that the author has analyzed and studied, and the way they were analyzed and studied, would surely encourage readers to become interested in the subject.

This book is extremely well written and so it would be safe to mention that The Origins of the Cuban Revolution Reconsidered is easily a very recommendable text for political enthusiasts and general readers alike. The fact is that the way this book is written is very lucid in nature and thus accessible by all beyond any sustainable doubts. This book is a success and the author Samuel Farber is triumphant in his quest. We would expect many more of such books in near future.

Lamb, Davis; Cult to Culture: The Development of Civilization on the Strategic Strata; National Book Trust. 2004

The Origins of the Cuba Revolution Reconsidered. (2017, Mar 28). Retrieved from https://studymoose.com/the-origins-of-the-cuba-revolution-reconsidered-essay 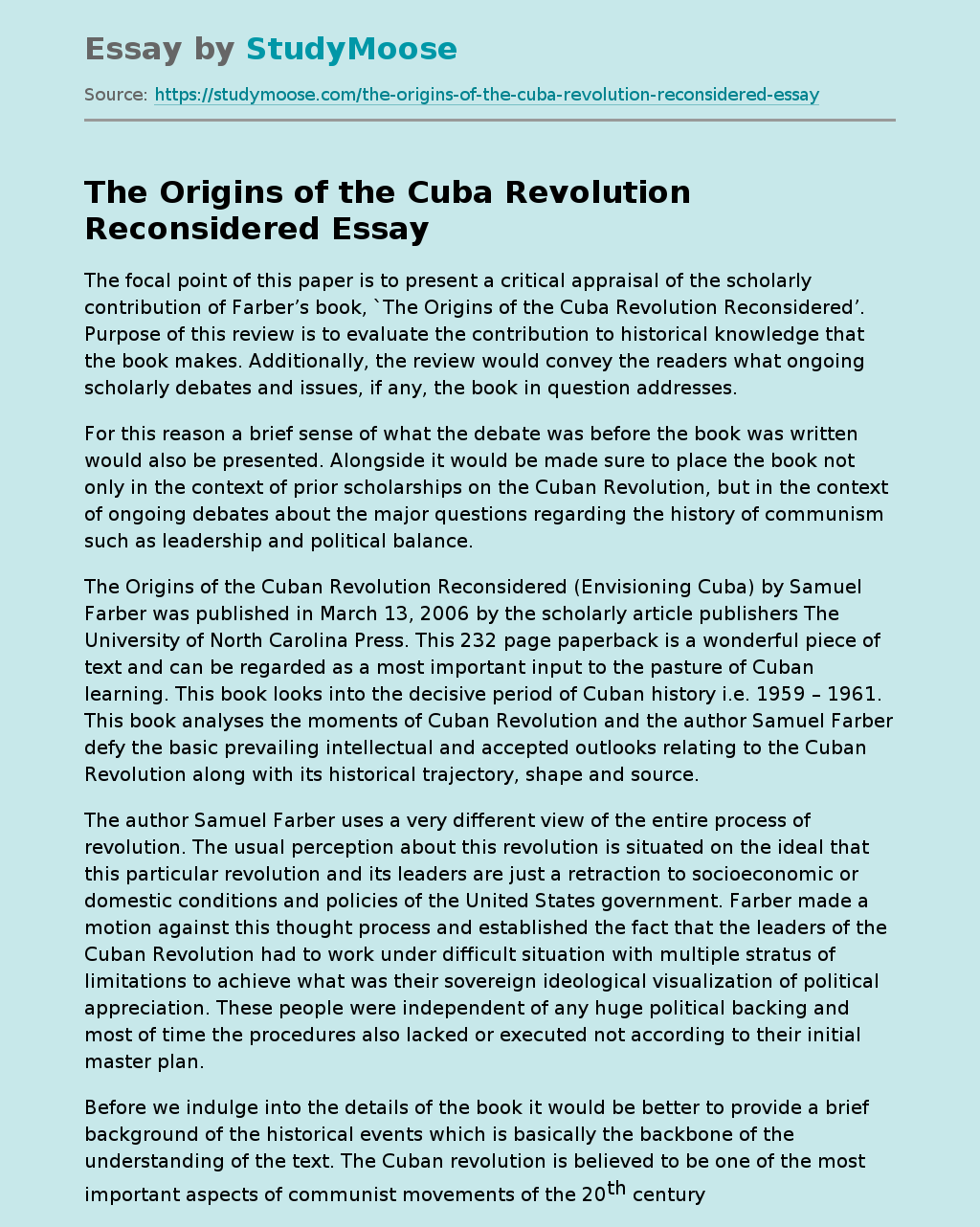