The Origins of Buddhism

First originating in India, Siddhartha Gautama, otherwise known as the Buddha [the enlightened one], founded Buddhism. The religion focuses and attempts to answer the universal question that society has yet to answer: what is the significance of our role in the universe? Faith in Buddhism requires that the follower relies on an acceptance of Buddha’s enlightenment and the path to Nirvana. In a religion that seems so complex, marriage is fairly simple in comparison. Our significance in the cosmos does not depend on other individuals, but more of our own.

Don't use plagiarized sources. Get your custom essay on
“ The Origins of Buddhism ”
Get custom paper
NEW! smart matching with writer

Thus, marriages in Buddhism are deemed more of a personal matter between two consenting individuals and contain little religious components, if any at all.

In Buddhism, marriage is considered to be a secular affair and is, therefore, not viewed as a sacrament. This milestone in a Buddhist’s life is regarded as a choice and they are not obligated to marry anyone. If one were to be married, however, they would not be restricted by any formal teachings or guidelines to what a proper marriage ceremony should include since there are none.

As a result, the engaged couple has free control over their wedding and can conduct it in any fashion they wish. It is common for the wedding to consist of a civil ceremony that would legally unite the couple. A Buddhist monk may perform a religious service to bless the marriage but will not solemnize the formal ceremony as it should not contain any religious elements (Wedding Customs – Buddhist).

According to fellow Buddhist Benjamin Cheng, a couple may also choose to have their wedding located at a temple with “monks chanting for a long time.” Furthermore, the lack of a set scheme allows for a country’s customs in which the wedding is taking place to have some sort of influence over the wedding (Buddhist Weddings). For example, in Sikkim, a state in northeast India, the couple, along with the family and friends, celebrate the wedding with a traditional Indian mask dance. Along with music and dances, the celebration also includes a great feast loaded with customary North Indian dishes such as dal makhani and standard Buddhist dishes such as nettle soup. In essence, a couple’s cultural and ethnic traditions can be fused into the wedding to make it unique to themselves.

Traditionally, there would be two major marriage rituals prior to the wedding. The first is known as Khachang which transpires once the couple has been selected. In this meeting, the bride and groom would “compare kikas [which is essentially Buddhist astrology] and set a good date on which the engagement can take place” (Wedding Customs – Buddhist). The latter of these two marriage rituals is known as Nanchang which is the formal engagement ceremony. Gifts of rice and chicken are presented to the bride’s mother is a form of gratitude for nurturing the bride with similar gifts of meat and tsang are given to the bride’s siblings. The kikas are compared once again to set a “final fixed date for the wedding” (Biography – Life History, Facts, Achievements & Death) and a “propitious day is also decided for the girl’s departure from her maiden house” (Wedding Customs – Buddhist). On the day of the wedding, the bride would wear a Bhaku dress adorned with intricate pieces of jewelry known as Khau. To match the bride’s elaborate ensemble, the groom would wear a sleeved Bhaku dress paired with a waistcoat known as Lajha and a sash around his waist. For this occasion especially, warmer colors such as red and gold are preferred.

Although marriage is neither encouraged nor discouraged in Buddhism, the concept itself is still considered to be a desire, and ultimately, an attachment to the physical world. Since marriage is a secular affair in Buddhism, there are no restraints held against divorce, and is also perceived as a personal matter. However, to prevent marital conflicts from arising, “the wives are to treat their in-laws with the utmost respect, serving them as lovingly as they would their own parents” (Sri Dhammananda). The couple should treat each other as equals as a way of understanding and make efforts to share a harmonious connection. In fact, “the Buddha advises old men not to have young wives as the old and young are unlikely to be compatible, which can create undue problems, disharmony and downfall (Parabhava Sutta)” (Sri Dhammananda Maha Thera). Husbands should also limit themselves to at most one wife. Having multiple wives would mean being desireful which directly contradicts the teachings of Buddhism. Hence, in spite of the fact that marriage is not recognized in Buddhism, fundamental values and morals are expected and both individuals are to be treated with respect.

Buddhism’s indifference towards the concept of marriage gives its parishioners the opportunity to make a conscious choice about what they want in life. Since there is no pressure to get married, practitioners of the Buddhist faith have full control over their wedding. They are able to incorporate their ethnic traditions and make sure that they make this event especially unique to themselves. Despite the lack of guidelines to follow, such a momentous day in a Buddhist’s life marks the start of a new beginning for the couple.

The Origins of Buddhism. (2020, Oct 18). Retrieved from https://studymoose.com/the-origins-of-buddhism-essay 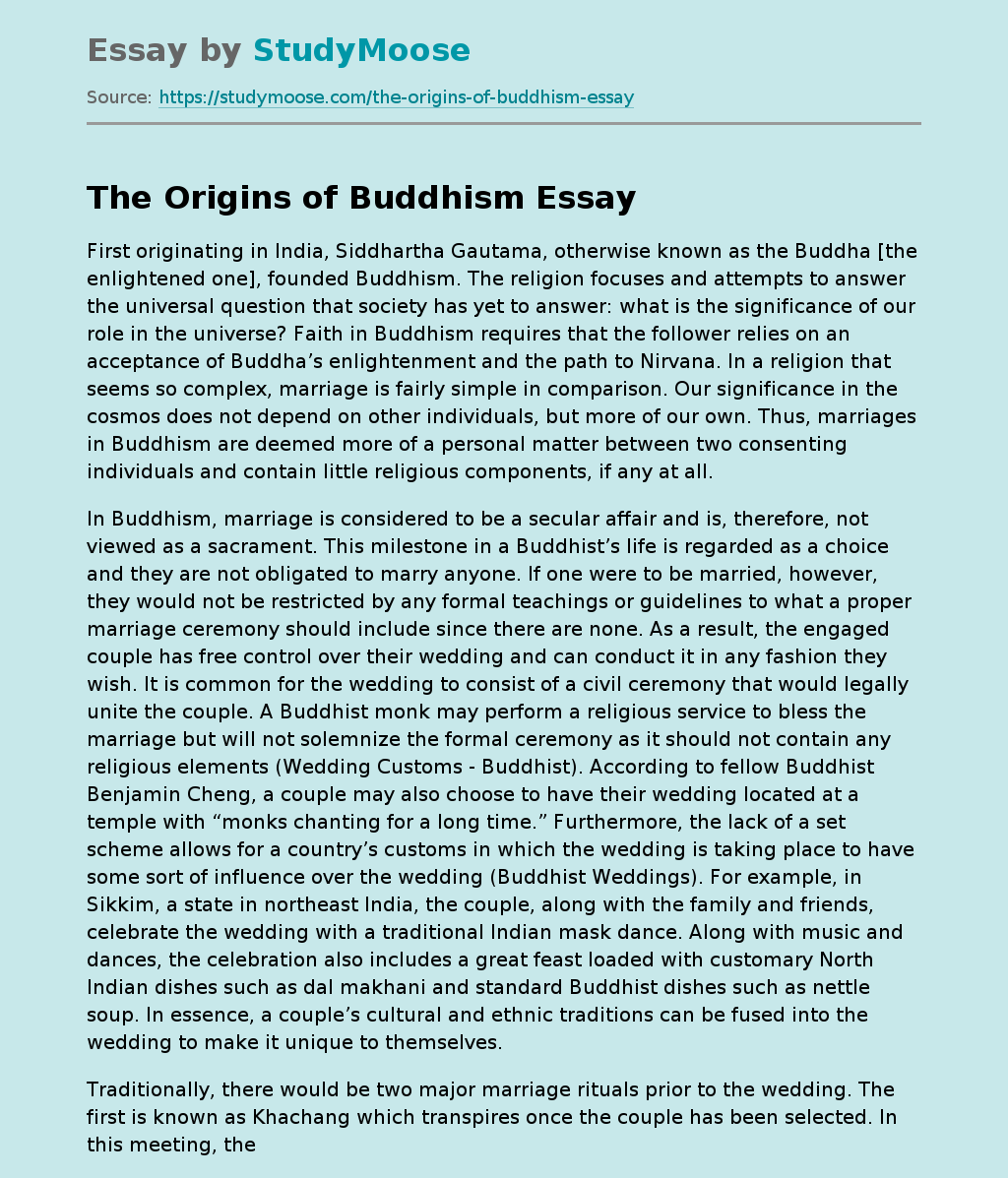