The Origin Of Civil Society

The arguments in ?The Origins of Society? Jean Jacques Rousseau, in his essay The Origins of Society, writes about an ideal form of government. In his essay he attacks several other proposed or existing forms of government by carefully destroying their claims. However, it seems that Rousseau?s arguments do not promote his idea completely. For example, why would Rousseau write about the ?right of the strongest? if at his time it were not relevant? Why then would Rousseau argue these ideas? Rousseau wisely began his essay by associating his form of government with a common and strong notion of a family.

In his analogy, the father (ruler) raised (governed) his children (citizens) until they were old enough to grow on their own. This is a strong point that attacked the monarchy of Rousseau time. The monarchy did not want its citizens believing that they would be better off with out them. For this reason they expelled Rousseau out of France; he had a strong point that really touched the readers of his time.

Next, Rousseau tries to convince the reader the strengths of the civil state by comparing in to the natural state. His view is clear from the start; Rousseau claims that the advantages of a civil state ?are of far greater value? than those in a natural state. Even more so, he refers to the ?passage from the state of nature to the civil state? a turn from ?a limited and stupid animal into a intelligent being and a Man.

? Rousseau explains that the difference between a civil state and a state of nature is that in a natural world, a man gets and gives only what can be physically held. A possession is only a man?s while he holds it. However, in a civil world, a possession can belong to a man without a physical grasp on the object. A ?positive title? is enough. This comparison is therefore a clear development to Rousseau?s idea that a civil state is necessary and that a monarch, a king that controls everything because he took over the land, really has no claim.

After that, Rousseau, in tries to destroy the idea that the strongest people have the most rights, starts with the definitions of ?the right of the strongest? and ?Obey the powers that be. The simple definition, as it seems, is that that the sayings are meaningless. Rousseau step by step takes apart the statements and proves that Right does not come form might. The attack is correctly based on the fact that there is no validity to a Right that is based on Might when the Might can easily be replaced. Also, Rousseau gives an example stating that a mugger, who is clearly mightier than his victim, cannot make it his victim?s duty to surrender his money. Therefore, Rousseau claims, It must be admitted that might does not create Right.? This definition clearly associates a monarch with the strong ruler because both were originally brought into power because of their strength.

Finally, Rousseau claims that slavery has no foundation. He attacks ?Grotius and those who think like him? by attacking their argument that people have the right to enslave others because they have the right to kill them in war. First, Rousseau continues this argument claiming that the right to kill was based in the right to enslave, thus creating a circle of unjustified claims. Next, Rousseau said that even in war, there is no such thing as a force to control others. All that a defeated nation has to do is what is being forced upon them, nothing more. He writes that ?a man enslaved, or a people conquered, in war is under no obligation to obey beyond the point which force ceases to be operative.? Anything else would fall under the category of Might brings right.

Therefore, as Rousseau tries to promote the ideal of a civil state by saying that any other state cannot exist, destroying the claim to slavery fits in very well. This argument, taking up much of this essay, is a point that needed to be addressed before asserting that a civil state is necessary. Rousseau feels that by conquering the claim to slavery, the reader would be left with no option other than to accept the civil state as the best form of government. This argument convinces the reader to turn away from the reality of slavery towards the truth of equality.

One can see that throughout his essay Rousseau carefully chose his argument to fit the audience of his time. The readers of this essay were being oppressed by their monarchy and lived in the cruel times of slavery. Rousseau showed the people that other forms of government are available to them. He showed them that they do not need to be oppressed any longer. As Rousseau goes through the relevant ?bad arguments? of the other forms of government he captures the readers attention and delicately passes on the idea that slavery and a monarchy are immoral and wrong. The equality can only be found in a Civil Society.

The Origin Of Civil Society. (2016, Jul 23). Retrieved from http://studymoose.com/the-origin-of-civil-society-essay 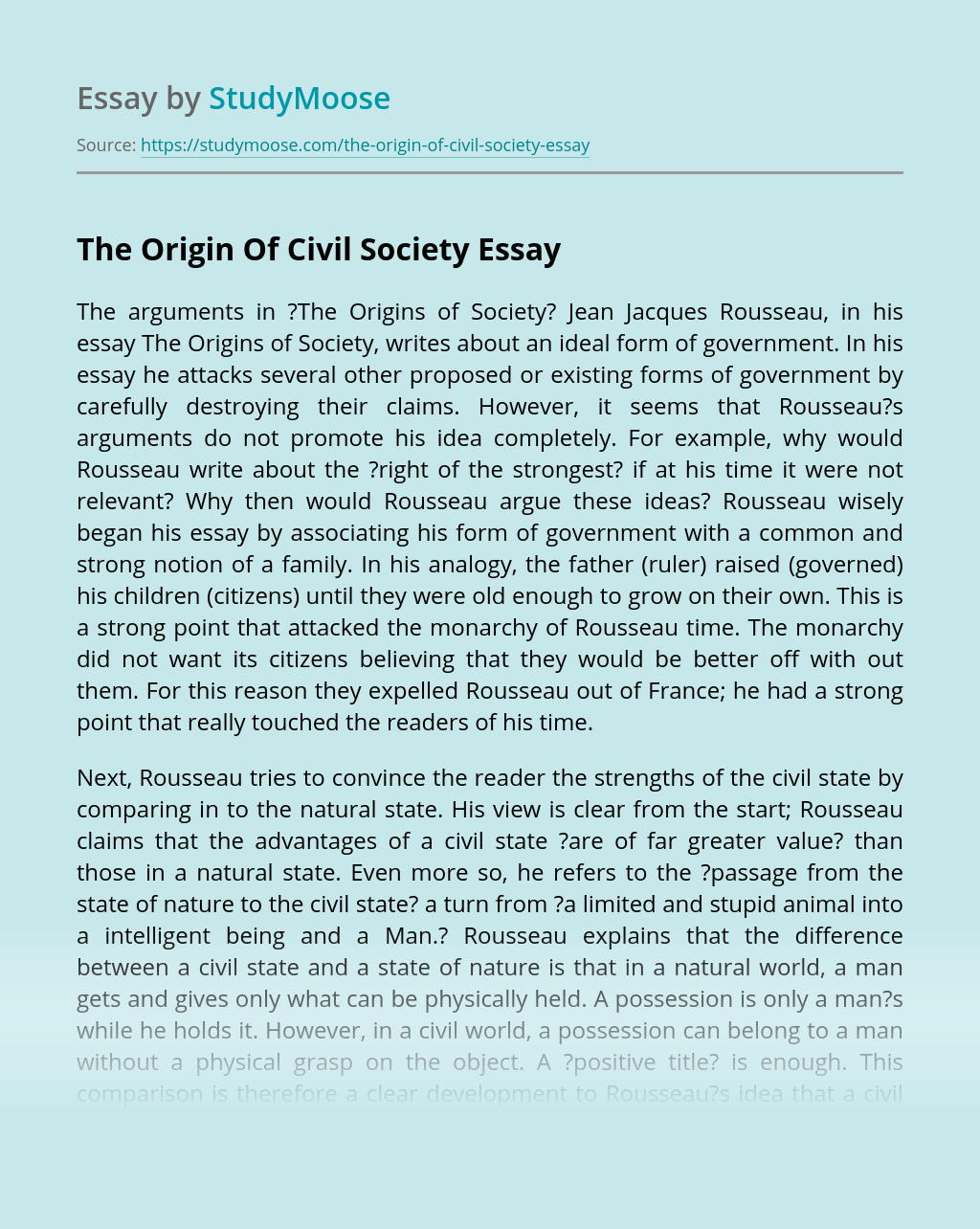 Don’t waste time
Get a verified writer to help you with The Origin Of Civil Society
Hire verified writer
$35.80 for a 2-page paper
Stay Safe, Stay Original