"The Ordinary Son" by Ron Carlson

In “The Ordinary Son”, Ron Carlson has created one of the blandest characters ever put on paper, and therein lies the story’s peculiar power.

Reed Landers is the son of a NASA scientist and a grassroots poet. In a family of geniuses, he is alone in his commonness. Nothing particularly meritorious underlies his conduct; his intelligence is average, his needs superficial. Reed’s siblings blossom under a strict moral diet of work and unheralded ‘sacrifice’. They eat sardines and crackers for dinner, refuse to mow their yard, and do without a refrigerator.

Don't use plagiarized sources. Get your custom essay on
“ “The Ordinary Son” by Ron Carlson ”
Get custom paper
NEW! smart matching with writer

Meanwhile, Reed, meticulously normal, rebels by choosing materialism. He aspires to average friendships, to owning a car, to physical labor.

Though Reed narrates the story, he offers little in the way of self-examination. Instead, he is defined by a succession of small encounters with minor characters-his family, a few slight friends, his boss. They drift in and out of the story, pausing in their orbits only long enough to refine Reed’s sharp points by radiating their unequivocal realities on his unpolished manhood.

“The Ordinary Son” is an anti-story. Mr. Carlson offers a photo negative of the everyday issues: teenage rebellion, sex, sibling rivalry, and coming of age. He looks at the spectacular with black-and white eyes that are neither awed nor mystified by what they see. He chooses shadow over detail and narrative over explanation. Placing Reed, a non-entity, among super-humans who exist in an ethereal realm of abstractions forces the reader to draw her own realities on a clean grey slate remarkable only for its flawless mediocrity.

Ron Carlson, faced with brilliance, presents instead the unlikeliest of heroes: an Everyman captured in the twilight of youth, unable to escape the genius that surrounds him and painfully aware that he watches with a mind that will never aspire, nor know defeat.

"The Ordinary Son" by Ron Carlson. (2016, Jun 22). Retrieved from https://studymoose.com/the-ordinary-son-by-ron-carlson-essay 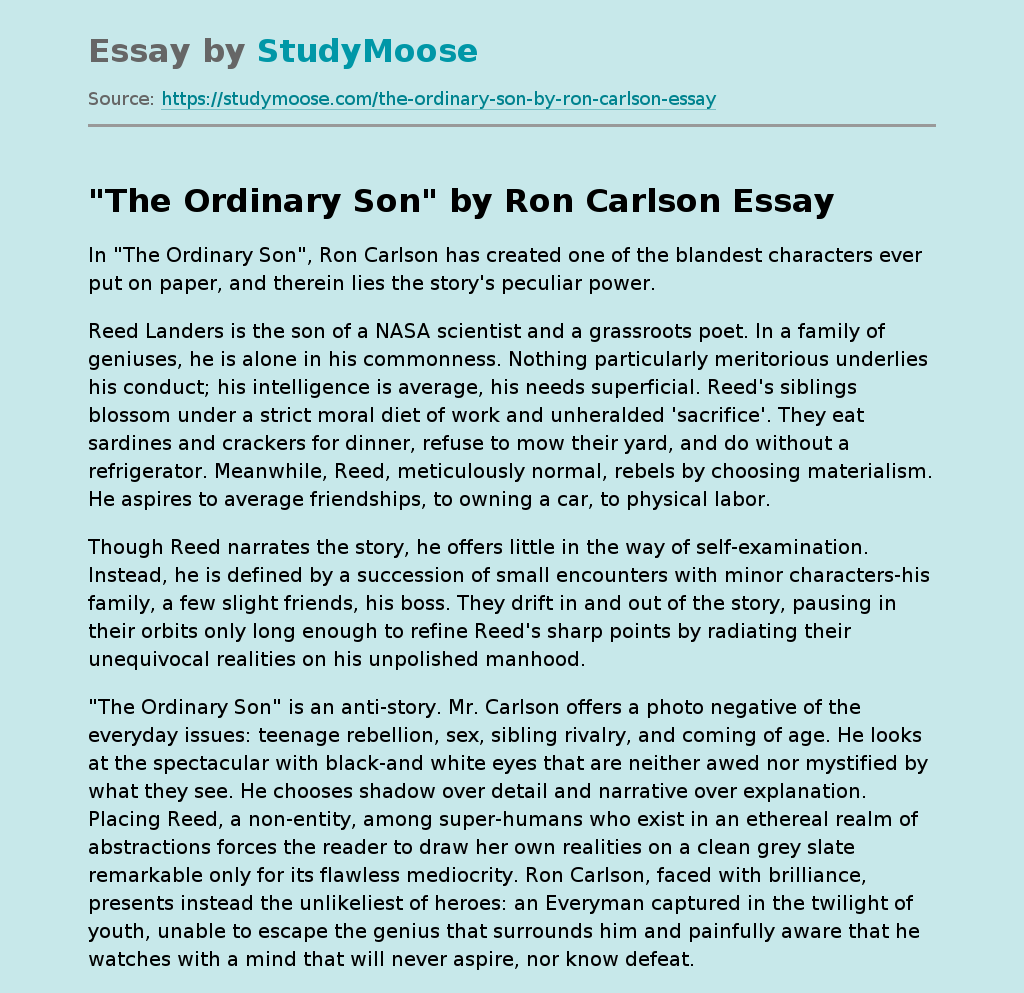