"The Open Window" by Saki

The short story “The Open Window” by Saki gives us a marvelous example of how appearance, semblance and our naivety can distract our attention from reality and even make harm to our health. This story also shows how a writer can make perfect use of irony.

“The Open Window” is a story about deception, perpetrated on an unsuspecting, and constitutionally nervous man, Mr. Nuttel. He comes to the country in order to cure his nervous condition. He pays a visit to the home of Mrs.

Turn in your highest-quality paper
Get a qualified writer to help you with
“ “The Open Window” by Saki ”
Get high-quality paper
NEW! AI matching with writer

Sappleton to introduce himself. Mr. Nuttel is intercepted by her niece, who, while they are waiting for her aunt, regales him with an artful story that, in the end, only makes his nervous condition worse.

In the story under consideration I would single out the following types of conflict: an external and an internal one. The internal conflict is a conflict within Mr. Nuttel himself, between the feelings he experienced.

The author contrasts two worlds: that of young people and that of adults. The world of adults is full of prejudices, stringent rules and fears; youthfulness is at the same time full of imagination, inspiration and creativity. Humorous repercussions of the story are caused by the anticipation of the superiority of the child, while controlling the adults. The young girl managed to make fool of five people and what is more, of millions and millions of readers. Towards the end of the story we are unaware of the author’s intentions.

At first we are inclined to laugh at Mr. Nuttel for being so gullible. We cannot even imagine that we are victims of the very same hoax that Vera perpetrates on Mr. Nuttel; that we have believed Vera’s well-told and interesting tale.

The author makes use of the third person narrator. He does not interfere for any comments or reflections of the events and does not help the readers to form their own impressions and make their own judgements. And we can conclude that this kind of narrator is an unreliable one, because the readers cannot understand the main irony till the very end of the story.

The protagonists of the story are characterized both directly and indirectly. With the help of indirect means of characterization, thoughts, words and actions of Mr.Nuttel, we understand that he is a tactful, delicate and sympathetic man who “endeavored to say the correct something”, sympathized with “the great tragedy” of Mrs. Sappleton. From his sister’s words “you’ll bury yourself down there and not speak to a living soul” we realize that Mr. Nuttel is quite an unsociable and a withdrawn person who either likes loneliness and prefers it to communication with other people or is afraid of them. The reason of Mr. Nuttel’s coming to this village makes us think that he is a very nervous man.

The niece of Mrs. Sappleton, Vera, is describes as a “very self-possessed young lady of fifteen”. The way this girl speaks to Mr. Nuttel adds to her characterization: “in the meantime you must try and put up with me”. She is a self-confident, intrepid, spoilt girl, who possesses an exceptional ability for imagination. By the way, observing the way of her bahaviour after telling her story, we can make a conclusion that Vera is a very good actress. She plays her role till the end of the story and to my mind deserves tumultuous applause. Though Vera’s motivations for lying remain unclear to us. We may guess that she could have done it from boredom, not having much to do in the village. Or maybe it was her usual way of behaviour with strangers and she practiced it from time to time. Or perhaps she had some mental problems herself, though she seems to be quite a normal girl.

The structure of the story is actually that of a story-within-a-story. The larger “frame” narrative is that of Mr. Nuttel’s arrival at Mrs. Sappleton’s house. Within this narrative frame is the second story, told by Mrs. Sappleton’s niece.

The atmosphere and mood of the story can be described from different points of view. While reading the story for the first time and not knowing the truth, the reader is in constant tension and anticipation of what is going to happen. So the atmosphere itself is quite tense. At the same time there present some humorous moments which clear the air. But at the end of the story everybody fully agrees that the atmosphere is ironic.

Emotionally-coloured words add to the tension and nervousness of the atmosphere: “shudder”, “purely horrible”, “ghastly”, “shivered”, “dazed horror”, “shock of nameless fear”, “grabbed wildly”, “bolted out”. The presence of Mrs. Sappleton helps to make the whole atmosphere more cheerful. She “bustled into the room with a whirl of apologies”, “rattled on cheerfully”, “said something briskly”, “brightened into attention”.

In the story we detect irony of situation, which arouses from the contrast between how a set of circumstances looks on the surface and what it actually is in reality. Saki dramatizes here the conflict between reality and imagination, demonstrating how difficult it can be to distinguish between them. Exactly this can be regarded as the theme of the short story. Appearances, which can be deceptive, and reality which is hidden behind them, are very often mixed. As a result people are misled by appearances, not recognizing truth, reality, and making fools of themselves. The open window itself can be a symbol of some kind of a boarder between imagination and reality.

The message of he story “The Open Window” can be as follows: we must be more prudent and far-sighted in everything, which we have to deal with, in order not to be misled by circumstances and other people.

"The Open Window" by Saki. (2016, Jul 16). Retrieved from https://studymoose.com/the-open-window-by-saki-essay 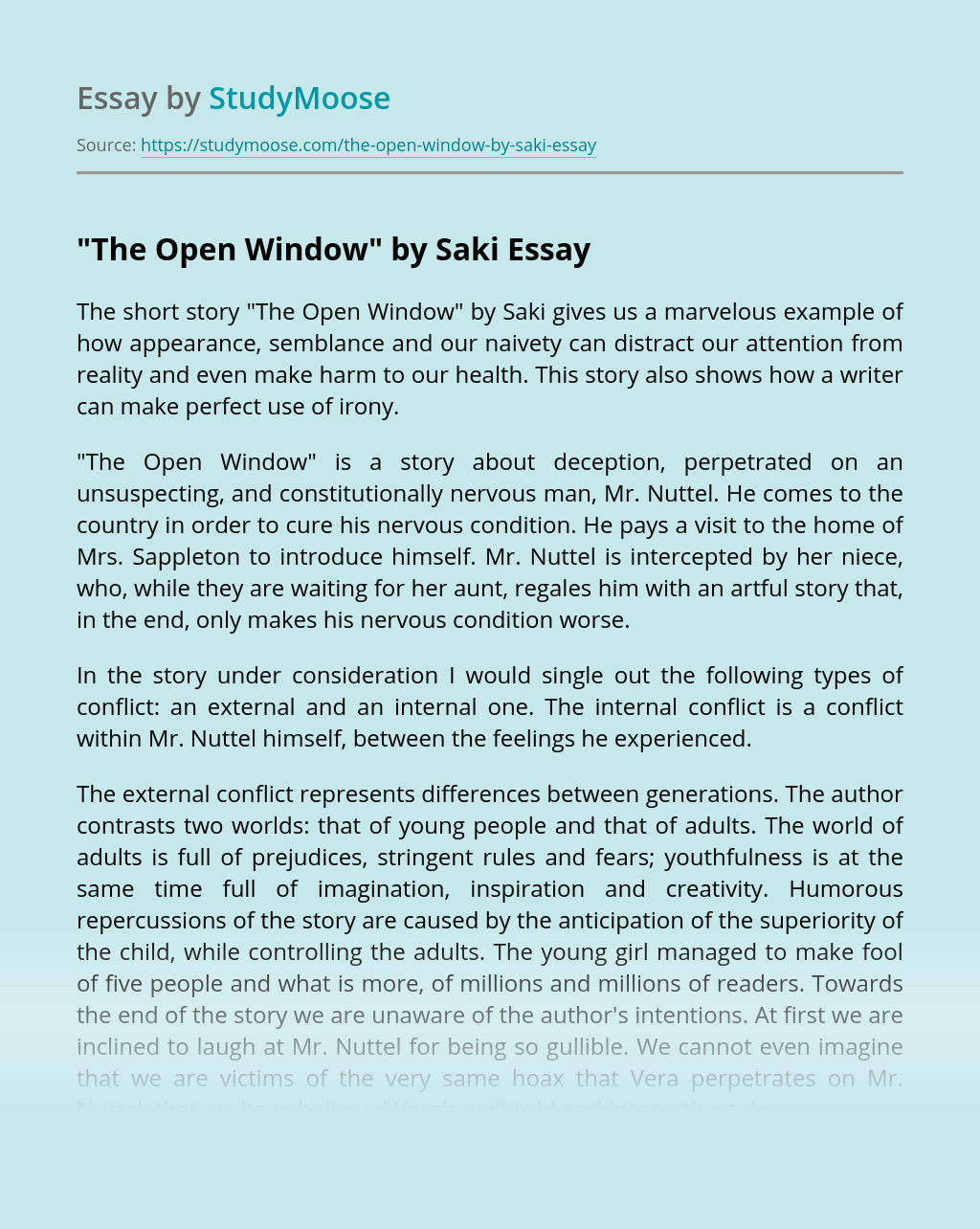 Turn in your highest-quality paper
Get a qualified writer to help you with
“ “The Open Window” by Saki ”
Get high-quality paper
Helping students since 2015
Stay Safe, Stay Original