Sophocles presents us with two men in the Oedipus Cycle, Oedipus, and his uncle Creon. Both are rulers of Thebes and share in their similarities as kings, fathers, and deservers of their fate; yet their similarities are few, while their differences number. Although Oedipus and Creon share these similarities: political, familial and religious (that is to say their gods and fate) their lives are quite different. As kings, they both become rulers of Thebes by a twist of fate. Oedipus kills the sphinx and becomes king.

Don't use plagiarized sources. Get your custom essay on
“ The Oedipus Cycle ”
Get custom paper
NEW! smart matching with writer

After his exile, his sons kill each other, leaving Creon king.

Both have sons that disrespect them. Oedipus’s sons turn a blind eye as he is banished from Thebes. “These were the two / who saw me in disgrace and banishment/ and never lifted a hand for me” (Oedipus Rex: 108). Haimon threatens Creon’s life and vows that Creon will never see him again. “And you will never see my face again. / Go on raving as long as you’ve a friend to endure / you” (Antigone: 223).

He even goes so far as to call his father perverse. “If you were not my father, / I’d say you were perverse” (Antigone: 222).

They both upset the gods when they act out of necessity. Oedipus has to kill Laios or be killed. Creon treats Polyneices like a traitor should by refusing him his right to be buried. Their differences, now, as kings, are that Oedipus rules the people of Thebes with love, as a father might his children, love.

The Thebans love and respect him as well. “You see how all the ages of our people / Cling to you altar steps; … Yet we have come to you to make our prayer / As to the man surest in mortal ways / And wisest in the ways of God…

Noblest of men, restore / Life to your city” (Oedipus Rex: 4-5)! Creon, however, does not have the love and respect of the Thebans. Haimon says as much: Your temper terrifies them – everyone Will tell you only what you like to hear… They say no woman has ever, so unreasonably, Died so shameful a death for a generous act: ‘She covered her brother’s body. Is this indecent? She kept him from dogs and vultures. Is this a Crime? Death? – She should have all the honor that we Can give her! ‘ This is the way they talk out there in the city.

(Antigone: 218-219) Haimon tells his father that the people of Thebes disagree greatly with his edict and his punishment of Antigone. So much so that even the son of the king hears some of their whispering. As a father, Oedipus begets children by his own mother; thus, his children are his siblings as well. Creon’s son, Haimon, is just that, his son. He is not his father’s brother as well. Those of Oedipus children who were present when he died cried and lamented his death. “I wish that charnel Hell would take me / In one death with our father.

/ This is such desolation / I cannot go on living” (Oedipus at Colonus: 168). Creon’s son, toward the end, despises his father so much that he takes his own life. “But Haimon spat in his face. He said not a word, / Staring — / And suddenly drew his sword / And lunged. Creon shrank back, the blade missed; / and the boy, / Desperate against himself, drove it half its length / Into his own side, and fell” (Antigone: 241). , Rather than endure, again, what his father has thus far put him through, he dies with Antigone’s corpse in his arms. In their fate lies yet another difference.

Oedipus kills his father because he stands to get run over by Laios. He marries his mother because, as the man who solves the riddle of the sphinx, he is the savior of Thebes and is given to the widowed queen, Iocasta, as a husband. He fathers children by her because it is his duty, as well as hers, to provide heirs to the kingdom. He does not know that the acts he commits are serious moral sins until the final scene of Oedipus Rex. Therefore, he does not deserve the fate to walk, as the man in the sphinx’s riddle, with a third leg, his cane.

Creon knows the Greeks Thanatopsis or, view on death. He knows the ritual of burying the dead. That is why his sin, refusing to bury Polyneices, is so terrible. He knows this will doom Polyneices to never descend to the underworld and his final resting place. It is not until his exchange with Teiresias and the Choragus that he realizes his error, and by then it is to late. “Come with me to the tomb. I buried her, I / Will set her free. / Oh quickly! / My mind misgives — / The laws of the gods are mighty, and a man must / serve them / To the last day of his life” (Antigone: 236)!

And therein lies the dynamic. Two men of the same bloodline, alike in their actions and intent, but differing in fate; as magnets of different poles are driven by the same force, so too are the decisions of Oedipus and Creon. Their goal is the same: the betterment of Thebes. And, as those two magnets are opposites, these men are opposites: in life and fate. “Fate, it seems, is not without a sense of Irony. ” (Morpheus to Neo in The Matrix) Two Guys, a Kingdom, and a Nasty Fate By: Dustin McCrory ENGL 1159 Sec. 159 Kay Murphy Paper # 3 March 18, 2001. 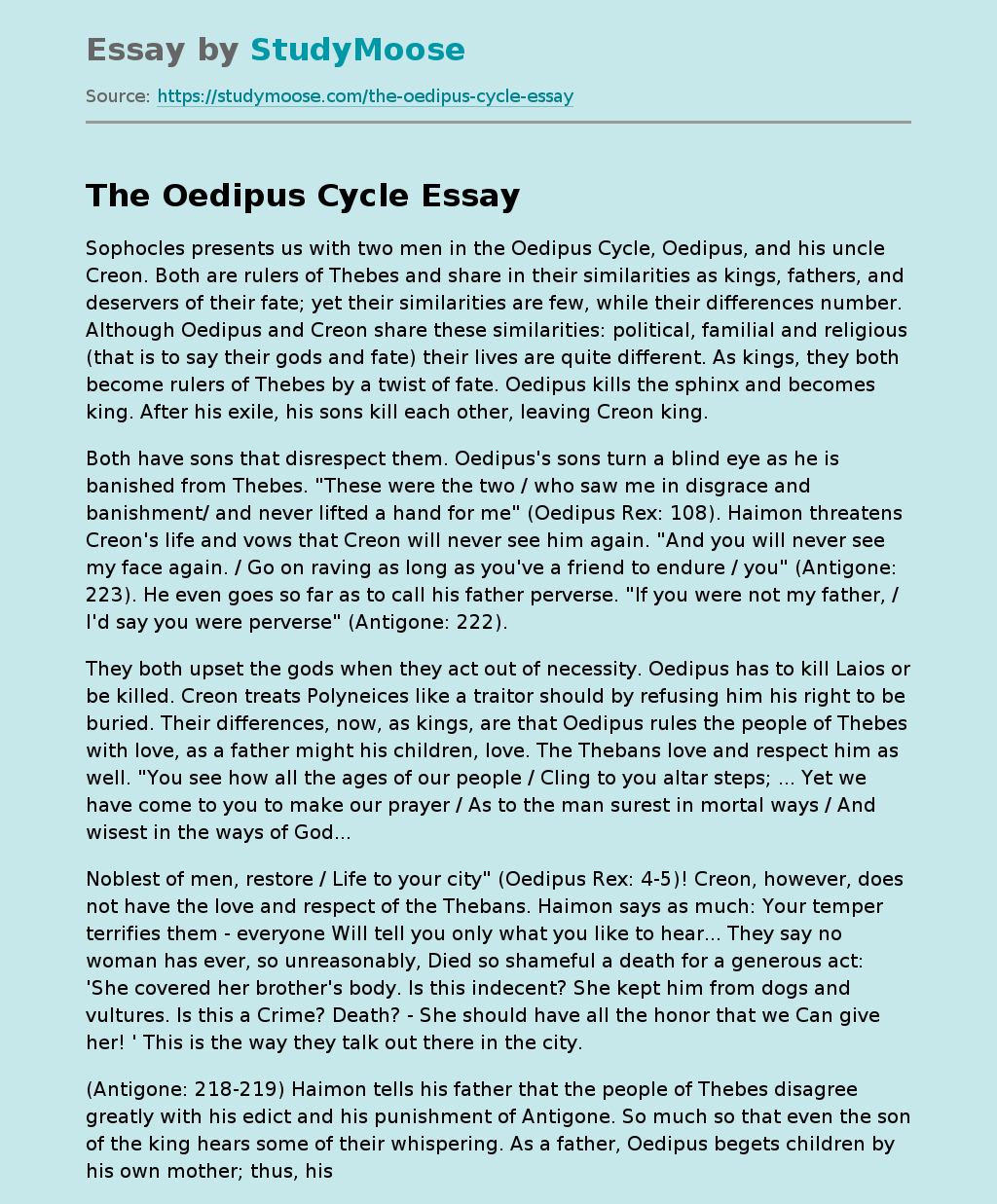