The Odyssey Book vs. Movie Version

In our world of advanced technology, we love to watch movies more than we love to read. Sitting in front of a flat-screen TV while eating popcorn and drinking soda would sound much more appealing than reading a book by the fire at night while drinking a frappucino from Starbucks. Now, producers and directors would take successful and famous stories and adapt it into a movie. Sometimes, they would succeed, with examples being the Harry Potter series, which received mainly positive reviews from both critics and the audience.

Turn in your highest-quality paper
Get a qualified writer to help you with
“ The Odyssey Book vs. Movie Version ”
Get high-quality paper
NEW! AI matching with writer

However, most of the time these people would unknowingly butcher the book based movie by taking out many important characters and events, with good examples being The Lightning Thief and Eragon.

Then another example of a butchered book, or epic in this case, is The Odyssey, written by Homer. It tells the story of a king named Odysseus who is cursed by the Olympian gods to wander the land for 10 years and be unable to return to his beloved city called Ithaca.

During his 10 years of wander, he lands on the island of the Cyclopes and unwittingly dooms most of his men to a fearsome Cyclops named Polyphemus, the son of Poseidon. In my opinion, I believe that the book version of Book IX in The Odyssey is better than the movie version.

Every time we watch a movie based on a book we read, we expect it to be just as good as the book. In the movie version of Book IX in The Odyssey, Polyphemus eats only two men (technically we don’t see Antiphous get eaten, but it is implied that he is), contradicting the storyline which says that he ate six men before Odysseus could form a plan to escape.

Next, Polyphemus does not look as intimidating as we thought him to be. Instead of seeing a shaggy giant at least 100 feet tall, the audience sees a hairless tall man with only one eye who can eat only one man before falling asleep. Then, we expected to see Odysseus taunting and angering Polyphemus with many insults and taunts, yet we see and hear only one taunt. Furthermore, since Polyphemus is so gigantic, we wanted to see him tear off the tip of a mountain then throw it at the escaping ship.

Yet, we see him pick up a tiny boulder and throw it at Odysseus- which misses by at least 20 feet. Lastly, when Polyphemus eats the unlucky soldier, he turns away from the camera, as if he does not want us to see the devoured man. After around 50 bashes against the ground, the victim ends up only losing a head. After Polyphemus stops bashing the man, the audience would have expected the victim to lose more than a head and an unscathed body. Perhaps they expected a broken body with bones sticking out and blood running down the body with its innards. Seeing Polyphemus as only 20 feet tall and not that strong as a Cyclops would not have met their expectations since they think of a hairy mountain with one eye that can crush a tank with his bare hands.

They would not have expected a hairless giant with one eye that can eat only one man before being full. That is not part of the description of a fearsome mythological creature like the Cyclopes. Expectations of a movie based on a book are always high ,yet the producers never add in the best parts in the book, a good example being the part where Polyphemus talks to the leading ram Odysseus is under, since that builds up plenty of suspense. All in all, when a book-based movie comes out in theaters, we want it to be as epic, awesome, and excellent as the book it was based on.

In both the movie and the book, feelings of suspense rise within us, especially when reading or watching The Odyssey. For example, in Book IX of The Odyssey, when Polyphemus is touching and talking to the leading ram, we are filled with suspense. What happens if Polyphemus discovers that Odysseus is hiding under the ram? We are filled with fear and worry. Also, we are literally biting our nails when Polyphemus gets ready to throw the mountain peak at the ship. We are thinking, “OH MY GOD IT’S GOING TO HIT THE SHIP!” Then, when we get to the part when Polyphemus comes in, we are thinking, “Oh God this is not gonna end well.”

However, in the book, the escape of them men centers around Odysseus, showing his guile, courage, leadership, and heroism, yet in the movie, the escape centers around Antiphous, the flutist and commander in the Trojan War. Suspense is built in both cases, but we never get to see Odysseus’s heroism in the movie. Instead, we see courage as one of his men sacrifices himself to let his crewmen escape. When we watch the movie, we expect to see Odysseus be the last man to escape. Instead, we see him run out first. In conclusion, we do not have that much suspense when it comes to watching a movie based on a book we have read. However, sitting by the fire, and reading a book in the middle of the night builds up more suspense for us than sitting in the theater watching a movie.

The Odyssey Book vs. Movie Version. (2016, Dec 26). Retrieved from https://studymoose.com/the-odyssey-book-vs-movie-version-essay 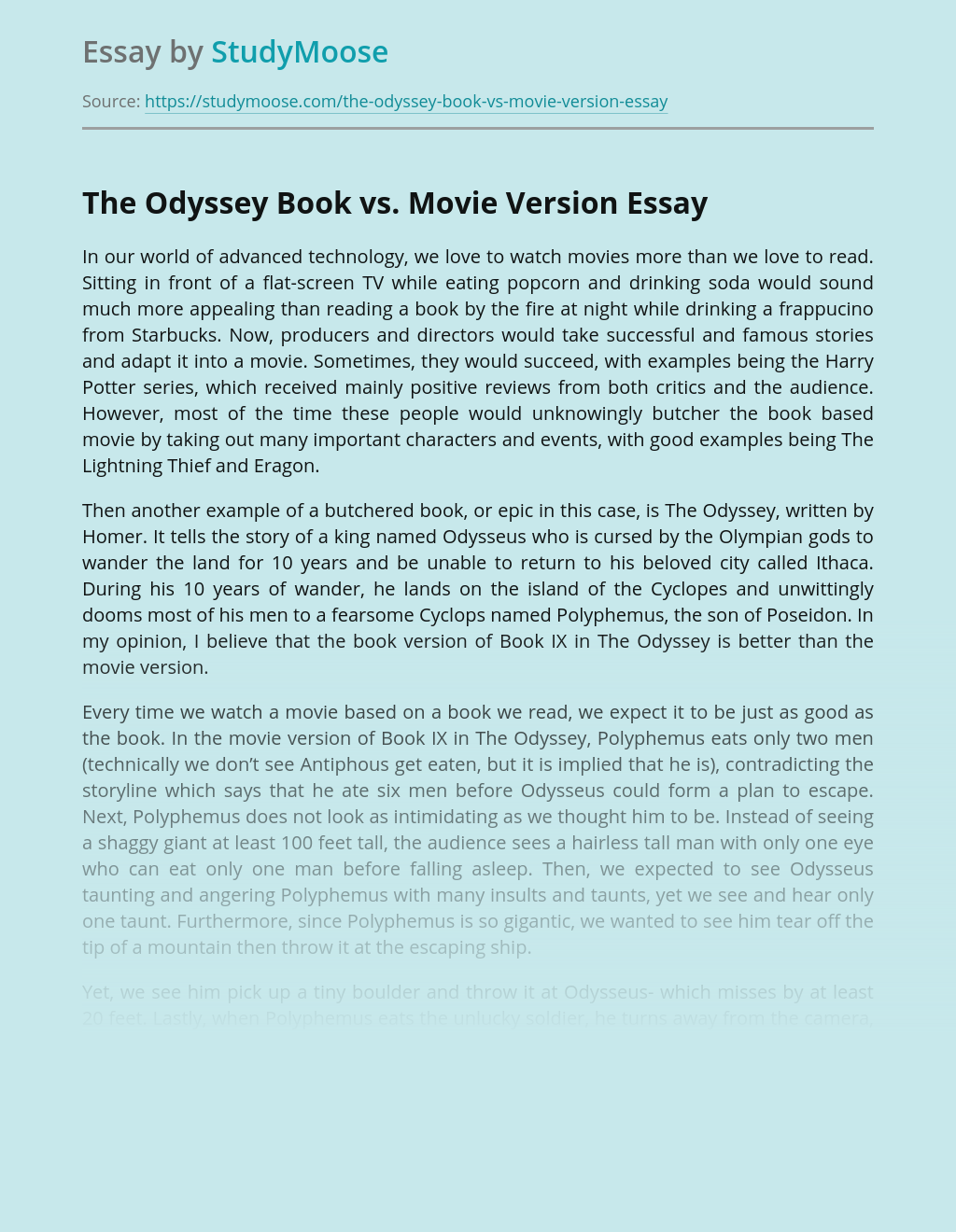 Turn in your highest-quality paper
Get a qualified writer to help you with
“ The Odyssey Book vs. Movie Version ”
Get high-quality paper
Helping students since 2015
Stay Safe, Stay Original