The novel Night is Eliezar Wiesel’s journal and record of Elie’s memories of being taken from his home, being treated like animals, arriving at Birkaneau, going to Auschwitz, his family’s death, and the loss of his own innocence, and the freedom at the end of it all that didn’t make him feel free. Throughout his time in the camp he experiences Dehumanization of the Jews, fights for Survival, and questions his Religion/Faith.

“Infants were tossed into the air and used as targets for the machine guns.

Don't use plagiarized sources. Get your custom essay on
“ The Novel Night Elie Wiesel’s ”
Get custom paper
NEW! smart matching with writer

” Throughout Night dehumanization constantly took place. They way the Nazi’s dehumanized the Jews in the camp included beatings, starvation, theft of possesion’s, separation of families, cruel murders, forced labor, and more. “I became A-7713. From then on, I had no other name”. Tattoing numbers on the Jews told them that the were just a number and nothing more taking away their name meant taking away them.

Survival was the only thing you could do to keep from dying.

Death constantly on your mind. One of the most important keys of surviving the holocaust was by self- preservation. “‘ Meir, my little Meir! Don’t you recognize me…You’re killing your father…I have bread… for you too…for you too…’ He collapsed. But his fist was still clutching a small crust”. There were times in which the Jews would kill each other, including their own family, for food. The man was attacked by his own son because everyone in the cattle car was desperate for food, after that two other men killed meir when he tried to eat his father’s bread.

Religion is a constant and important theme in Night. It’s first mentioned when Elie wants Mosh the Beatle to help him teach his faith. He studies “the Talmud during the day and the Kabbalah at night”. When he sees the furnaces, he writes ‘Never shall I forget those flames that consumed my faith forever. Never shall I forget those moments that murdered my god and my soul and turned my dreams to ashes.” The existence of the camp the persecution of the Jews, the dehumanizations of himself and the others around him made him question his god.

At the beginning of the war Eliezar was dedicated in his faith in his belief in God, but throughout his experiences in World War 2 his faith slowly starts to wither away. While in the concentration camps Elie sees the officers dehumanize its prisoners, he wakes up every day not knowing if he’ll live or die, the only thing he can do is survive.

The Novel Night Elie Wiesel’s. (2021, May 18). Retrieved from https://studymoose.com/the-novel-night-elie-wiesel-s-essay 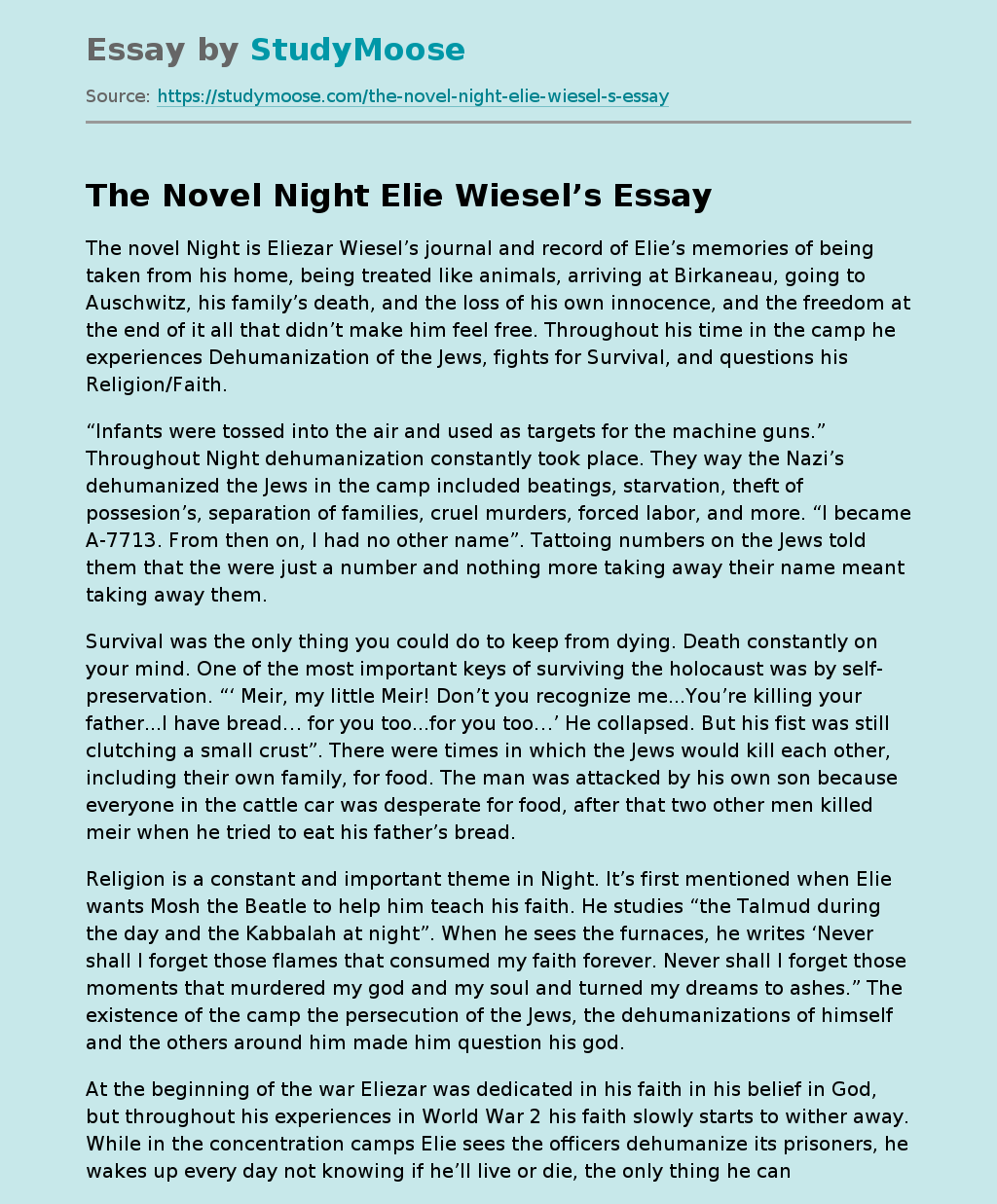