The Not –So-Wonderful World of Euro Disney

The major factors led Euro Disney’s poor performance was the lack of cultural consciousness and market survey. Euro Disney was built according to other American Disney parks without thinking about the culture difference. They used all American characters instead of French famous cartoon characters. Alcohol was prohibited in the park where enjoy drinking is a part of local culture.

Turn in your highest-quality paper
Get a qualified writer to help you with
“ The Not –So-Wonderful World of Euro Disney ”
Get high-quality paper
NEW! AI matching with writer

Costumers needed breakfast while they downsized the breakfast supply cause they were informed erroneously. Price policies were wrong so that costumers cannot afford it. Europeans vocation was not as long as Americans’ so they cut the hotel expense.

In addition, the transatlantic airfare went down make it cheaper to go to Florida than costumers go to Paris. Hong Kong was in a contrast situation. Disney has done too much survey to make it localized.

But customers found that here was no difference with other Chinese amusement parks. The park is too small to make costumers excited. Chinese visitors were not familiar with Disney’s Characters, so there were a lot of cultural discount.

2. To what degree do you consider that these factors were (a) foreseeable and (b) controllable by Euro Disney, Hong Kong Disney, or the parent company, Disney?

There are many factors that have been foreseen and controllable by Euro Disney. The market survey could reveal that Europe has local famous cartoon character that they can take advantage of.

The length of the vacation is a factor that can be found easily as well. The survey may also seen that breakfast is important for Europeans and the wine in European culture is irreplaceable. The only unforeseeable event should be the price war between airlines that fly the transatlantic flights.

3. What role does ethnocentrism play in the story of Euro Disney’s launch?

The Disney introduced a whole American experience in marketing which based on domestic market. They though European people should react as the people in USA and Japan, which is opposite. Europeans proud of their culture and French see Euro Disney as American imperialism because they have their own famous cartoon characters. Besides, Europeans have shorter vocation than American people do so they will cut their hotel expense in the parks. The attitude toward alcohol and pets are also different from America in France. In a word, Disney shouldn’t transport their experience based on USA and Japan to France because the culture context are totally different here.

4. How do you assess the cross-cultural marketing skills of Disney?

Disney Company is very confident of their brand and cultural marketing strategy. They thought they could handle because they are really successful in some countries. But Euro Disney is not such successful because of the Disney Company’s arrogant attitude. They ignore the existence of challenges in new environment. For example, French like drinking and they are proud of their culture. Disney was overpriced because in European economical status, it is hard to incentive the customers. They predict wrongly in marketing and they cannot provide a better service and equipment. The company ignores the difference life value in different cultural environment. French like resting, so working time is also a problem.

5. Why did success in Tokyo predispose Disney management to be too optimistic in their expectations of success in France? In China?

Disney was successful in Japan. They did not invest much capital in Japan. But the success is unexpected. Disney tries to get the better performance when they invest to build Disneyland in Paris. They regret not to be larger so this time they made a huge loan from French government. They ignored the people who are against their plan. In China, they also need concern the culture, budget and customers need. Japan is not common case. Disney Company should consider different countries styles more before making the strategy.

6. Why do you think the experience in France didn’t help Disney avoid some of the problems in Hong Kong?

(1) The cultural differences.
In both two places, they made mistakes in cross culture issues. In France, they just transplanted the American model into Pairs without considering the French values, custom. In Hong Kong, they just considered the Feng shui, which is a small part of Chinese culture. They still ignore many important characteristics such as the tour traveling. They cannot avoid failure before they knowing the Culture characteristics in the whole picture.

Pricing is also a very important issue. Considering the economics environment, euro and Hong Kong both are not very well to accept a high price. (3) Marketing measures undeserved Disney just built up facilities but they have their own preference so update new things and cartoon such things are very important. They don’t have a whole understanding in these two places’ cultures.

7. Now that Hong Kong Disney is up and running, will the Shanghai development benefit from the Hong Kong experience?

Yes, we think that project in Shanghai should benefit from the Hong Kong experience. It is so similar culture between Shanghai and Hong Kong. Learning from past mistakes, Disney will take into consideration what the Chinese culture wants. By continuing to do research and find out what the target audience wants to see, there is no doubt that Disney theme parks is China will continue to be successful.

8. Now that Disney has opened Hong Kong Disney and begun work on the Shanghai location, where and when should it go next? Assume you are a consultant hired to give Disney advice on the issue of where and when to go next. Pick three locations and select the one you think will be the best new location for “Disneyland X.” Discuss.

We think the new location include: Moscow, Russia, Mumbai, India, Sydney, Australia. All locations have large a large population and a respectable economy in present day. We would recommend starting to build at one of these locations within five years. Moscow, Russia is the famous city in the world, and have a decent economy, large population. If the theme park would been completed, Disney should change the strategic form learning the mistakes in Paris. The park in Moscow will attract the population in

Europe—especially east Europe. Mumbai, India would be my choice to build a new Disney because of the very large population not just in Mumbai, but also in surrounding areas. As we know that Indian have a keen interest in the American culture. Another one, Sydney, Australia is a good choice. The Disney stories and fairytales wouldn’t really have to be translated into another language since most of Australia speaks English and would be somewhat familiar with Disney characters and such.

9. Given your choice of locale X for the newest Disneyland, what are the operational implications of the history of Euro Disney and Disney Hong Kong for the new park?

(1) Before building a new theme park in a place, Disney need to research the past culture and history. They have to deal with the culture conflict. For example: the early advertisement of Hong Kong Disney; they created an image of two parents and two children enjoying the park, but it was quickly brought to their attention that most couples that visited the theme park were limited to only have one child by the China government. Little mistakes like this when designing, building, and marketing new Disney theme parks will be avoided by learning more about the history and culture of that particular country or area. Hiring people who know and understand the culture to build and market Disney’s theme parks would be the best idea for Disney. (2) Doing target market researching in the early time.

(3) Analysis and fully understand the needs of the market. (4) Searching various external factors and analysis the possible influence which will effect the potential project most.

10. Think forward to 2020 and presume the rough politics and violence of the MENA region settle down substantially. Where would be the best location for a Disney park in that region? Defend your choice.

We think the next Disney in MENA is Dubai. Dubai is the most popular city and emirate in the United Arab Emirates. Nowadays, Dubai has become a global city and a business and culture center. As the rapid economic growth and the influence of United States, people have realized the Disney and its characters. Stable political environments also provide a possibility to develop the cultural industry. So Dubai will be the next choice to build Disney.

The Not –So-Wonderful World of Euro Disney. (2016, Apr 27). Retrieved from https://studymoose.com/the-not-so-wonderful-world-of-euro-disney-essay 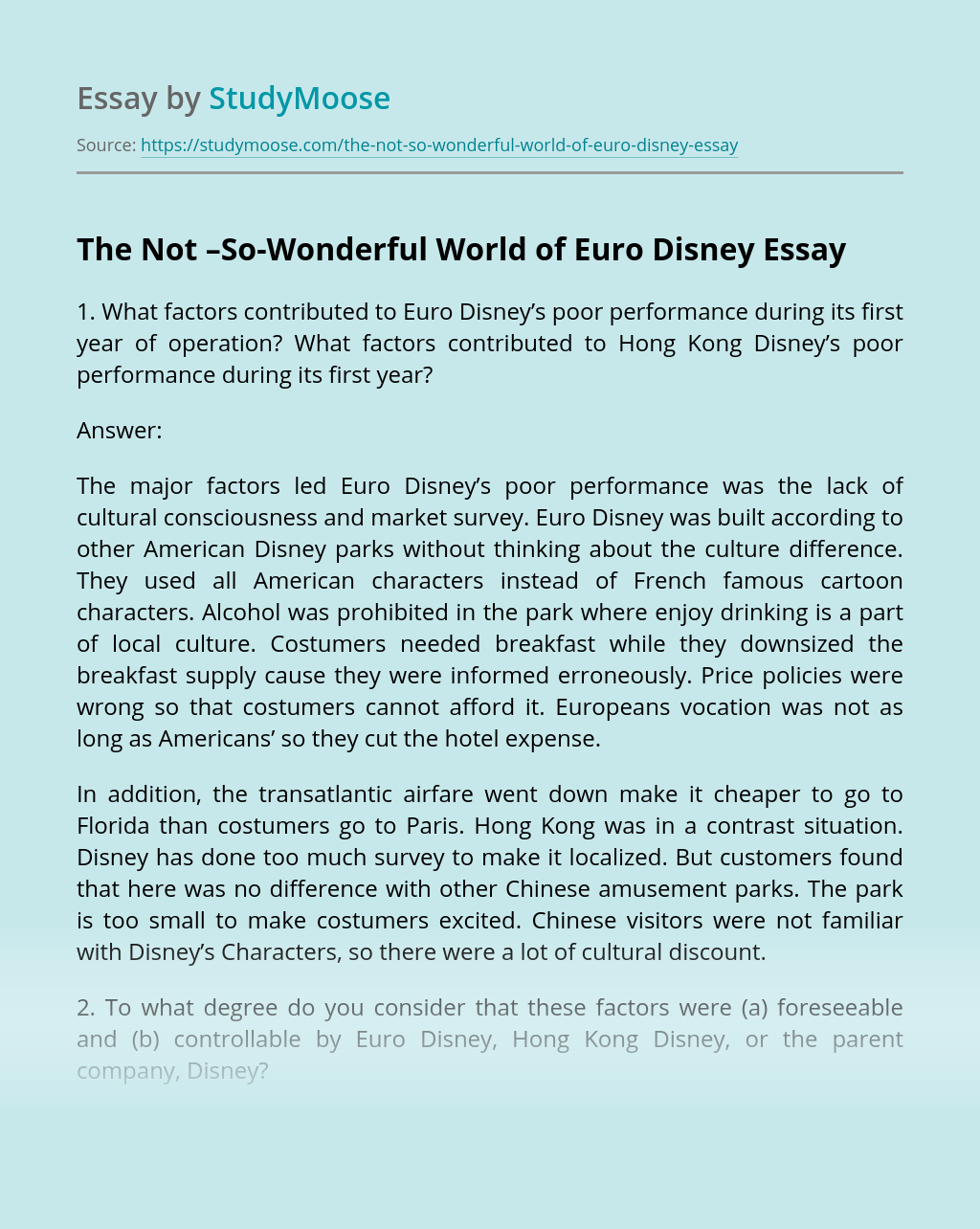 Turn in your highest-quality paper
Get a qualified writer to help you with
“ The Not –So-Wonderful World of Euro Disney ”
Get high-quality paper
Helping students since 2015
Stay Safe, Stay Original