The night was stormy ...

What are the novelistic conventions at which Austen pokes fun; how she gets her comic effects at the level of the individual sentence, and how this passage relates to the rest of the novel.

In Northanger Abbey, Austen pokes gentle fun at the Gothic genre and its readers, who would have had their own expectations of Northanger, stemming from the Gothic. Initially, the reader doesn’t know quite where to find him or herself. On the one hand we know that Catherine is a silly girl, but we are drawn in by the language of the text.

Don't use plagiarized sources. Get your custom essay on
“ The night was stormy … ”
Get custom paper
NEW! smart matching with writer

The feel is at once veritably Gothic but also comic. We laugh at Catherine because not to do so would be to admit that we are like her – wanting her to find something even though we know she will not.

As a heroine, Catherine is somewhat lacking in the typical physical traits and practical and mental abilities. However, she does have many of the emotional attributes of a classic Gothic heroine – she is sensitive and thoughtful and she has aspirations – but all these qualities are satirised by Austen.

Catherine’s interpretation of events and situations is elevated beyond normal, sensible intuition. The roll of paper at the back of the cabinet, so clearly mislaid and left in haste (at least, this is clear in retrospect), to her is placed there ‘apparently for concealment’. ‘her feelings at that moment were indescribable.’ but Austen goes straight on to describe how Catherine feels. We know though, that her ‘anxious acuteness’ is not as a result of being truly scared; rather because she is truly dismayed at not actually finding something to scare her.

Austen makes good use of ‘free indirect discourse’, allowing the narratorial voice to slip in and out of Catherine’s consciousness. She accedes that she is in an Abbey, the epitome of the Gothic and everything she loves, but tries to convince herself that she is happy at having nothing to fear. Almost as if she is aware of the obvious silliness in the way she impresses a fictional template on the world around her, Catherine’s own voice again enters the narrative, justifying her actions in her hope at finding something terrible in the cabinet – she ‘never … had the smallest idea of finding any thing in … the cabinet’. Interestingly, there are echoes of Isobel in her self-delusion (in Bath, when the two young men are looking at her and she pretends not to care).

What makes the situation worse is that the light goes out. Again, this is Catherine’s own doing. She creates the Gothic mood herself – had it been the wind that burst the shutters and blew out the candle, that would have been truly impressive, and in line with Gothic tradition, but she snuffs it accidentally herself. These involuntary actions and the romantic thoughts she has are symptomatic of her desire to experience the life she reads about in her novels. In a way, it can be seen as a safety barrier, set up by her, between her and the domestic life that really awaits her. The cabinet in her bedroom was open all the while – Catherine actually locks it herself and then has to unlock each one; quite symbolic of her subconscious having to create a mystery in order to discover it.

The language is emphatic: the darkness is ‘impenetrable and immovable’ but everything that seems to Catherine to be ‘absolutely impossible’ happens easily. The cabinet door was ‘immovable’; that she should get any sleep, ‘entirely out of the question’. All of her actions are so laboriously constructed; when she isn’t completely involved in a fantasy, she is trying so hard to act in a normal way and convince herself that everything is normal and natural, which it is. Every action or look has significance for her, even her indifference is happy.

That the end of the chapter coincides with candle going out is another example of the way Austen plays with the Gothic convention of the ‘cliffhanger’. Of course her satirical take on the genre, means that when Catherine and the reader do find out what the note contains, we are both let down considerably.

Nicola Watson describes the Gothic genre as being ‘essentially domestic’. She explains how one of the seminal Gothic authors, Mrs Radcliffe set as her background the castles and convents of C16th France and Italy, and how the architecture became a representation of oppressive and terrible acts. Northanger Abbey, although an Abbey and as such completely within the Radcliffean Gothic model, is far removed from its sublimely desolate continental cousins. For Catherine, a microcosm of the building is its rooms and the furniture they contain. That Henry has already primed her for the ‘odd’ discovery of the Japan cabinet only fuels her imagination and appetite for the Gothic.

Henry is obviously sufficiently well versed in the Gothic and Romantic novel himself, given his prior description of the Abbey that fit so well with what Catherine expected to find, and thought she had. It could be construed that Henry has quite a good grasp of Catherine’s character and also quite a wicked sense of humour. He must know which room Catherine would be occupying and the existence of the cabinet. It seems that his playful description was meant to excite Catherine upon her arrival at Northanger Abbey.

Perhaps he did not know the extent of her imagination though, as he seems genuinely surprised to uncover her fears about his mother’s death. However, his reasons are not totally base. Although Henry is effectively setting Catherine up for a fall, it is linked to her being coached out of her preferred reading genre, or at least to a position from where she can appreciate its true worth as pure escapist fantasy.

Through her clever use of typically Gothic description, Austen creates a textual dichotomy, comprising the reality of the actual events, and the elevated language used to describe them. The language Austen uses in her description of Catherine’s emotional state is wholly incongruous and out of proportion to the events. For example, when opening a drawer, ‘her courage did not fail her’. This is much how the whole novel is constructed, apart from the last couple of chapters, which are shockingly plain. It conforms to the didactic convention of the heroine learning or being taught, either about herself or the world. Overall, Henry Tilney acts most overtly as a tutor, but Catherine is forced to learn, or at least acknowledge something from almost every encounter that she has with people or places. In the novel, her final lesson is that life is not like the novels that she reads; it is more sedentary, which can be far more frightening. 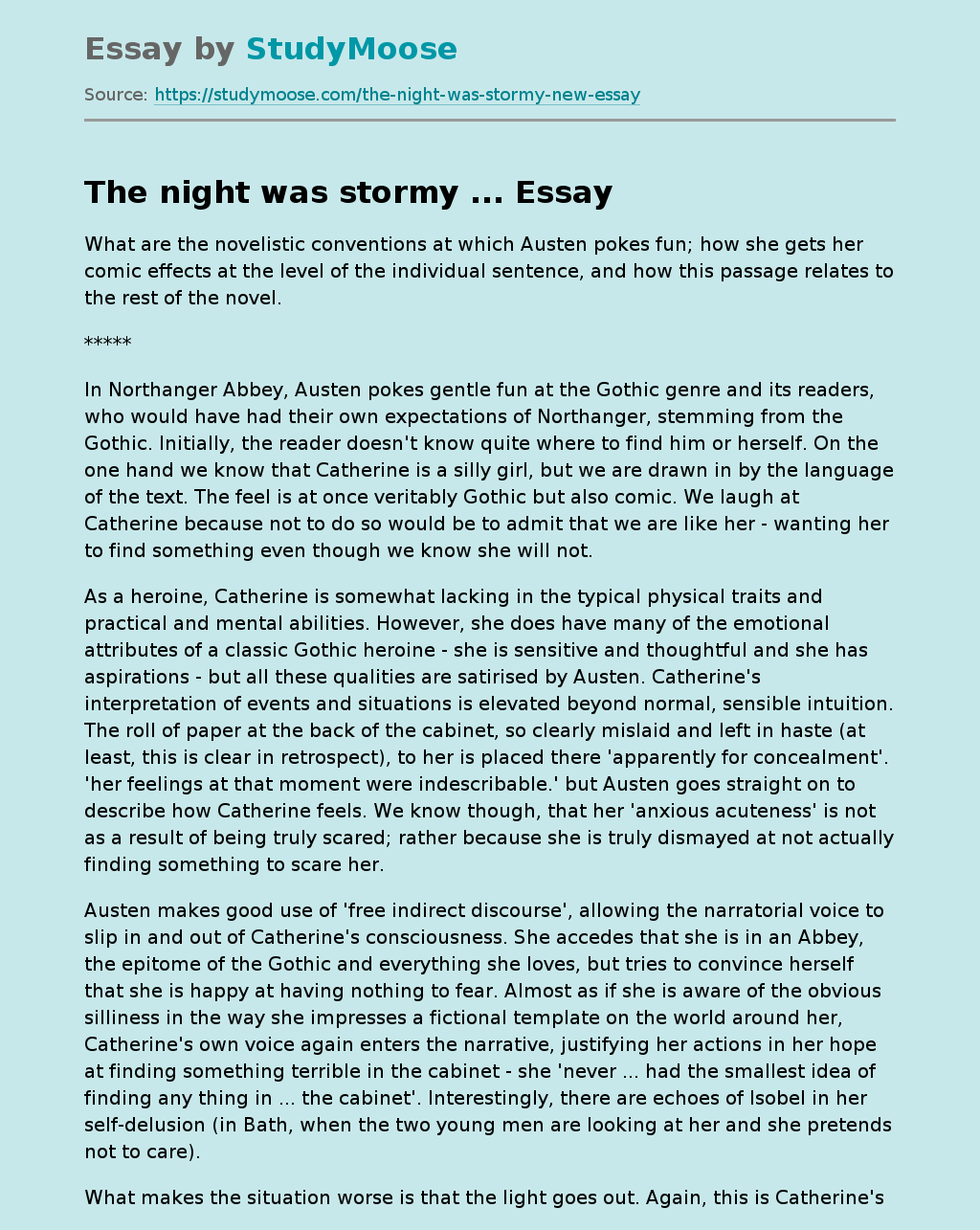