Slavery by definition is the captivity and states of bondage the Negros were placed in daily. This was a long and hard battle black people fought in order to achieve a greater position in life. As the struggle continued, the drive for social acceptance, equality and a desire to contribute their culture to be remembered throughout history became the goal of many. The Negro race has greatly evolved from the struggle of inequality to the desire for his/her freedom and contributions to the world.

Don't use plagiarized sources. Get your custom essay on
“ The Negro Evolves ”
Get custom paper
NEW! smart matching with writer

Two authors take a look at the progress Negros have made since their beginning, and they evaluate their contributions to history. Arthur A. Scholmburg shows the Negro’s strive for a place in history in “The Negro Digs up His Past”, while Elise Johnson McDougald deals with the advancement of the Negro woman during her struggle in “The Task of Negro Womanhood”. It is seen in both these authors’ works what efforts the Negro took toward the goal of prosperity and the hope of securing their history so it can still be read today.

It is important to look at the Negro’s past in order to understand their progress. In “The Negro Digs Up His Past”, Schomburg describes the Negro as having had, ” a definite desire and determination to have a history, [one that was] well documented” (Schomburg 61). Because of this desire, the Negro became, “a pioneer in the struggle for his own freedom and advancement” (Schomberg 62). According to Schomberg this was done in three ways.

The first was that the Negro was an active collaborator, taking ideas and combining them together in order to achieve a goal. By having a creative method to achieve his goals the Negro could push toward prospering in different areas such as business, family and culture. The second was that the Negro held the virtue of being exceptional, which meant striving to do his best. Pursuing his best was his hope to reach new levels that were feared the Negro race could not be considered exceptional in and by doing so prove his equalization to the white race.

The last was dealing with group achievement. The Negro hoped to only prosper individually, but to show the advancement of the race through group achievements. A desire to be remembered in history convinced the Negro to put forth effort in projects regarding their culture. With the goal of maintain and preserving culture the Negro, “slowly and with difficulty” (Schomberg 61) began to advance. Institutions such as the American Negro Academy were founded, eventually followed by research facilities like The Negro Society for Historical Research. Places like these contained, “the world of books and documents dealing with the Negro” (Schomberg 65).

A place where the Negro could keep items describing his past ensured a preservation of Negro history. By doing this the Negro culture could one day be studied. If he could look at his past he can set goals for his future and learn from his mistakes. He can be proud of his advancements and therefore increase racial pride. Schomberg ended his story with the idea that giving the Negro a past will instill pride and self- respect. A man once, “without history because he had been considered a man without a worthy culture” (Schomberg 66) now creates an opposite view on his culture. His strive for prosperity has rewarded him with advancement and has made his culture be remembered.

If you place emphasis on the Negro woman you can clearly see her desire to advance and her struggles as she deals with change. The first struggle the Negro women faces, which Elise McDougald states in her essay “The Task of Negro Womanhood”, is her desire to overcome ‘the grotesque Aunt Jemimas of the street- car advertisements” (McDougald 69). Such a stereo type of a woman who is nothing but a housewife is what drives the Negro woman to prove her intelligence and capabilities through her accomplishments. McDougald stresses that a, “challenge to young Negro womanhood is to clearly see this trend and grasp the proffered comradeship with sincerity” (McDougald 74).Her hope is for the black woman to prosper in the workplace. To set out with goals of achieving positions never before granted to a black woman and in doing so prove that she is strong, determined and capable. She is as a good as any white woman in the workforce and even able to obtain jobs once granted to only males. While some Negro women were housewives, it is the two larger groups that dominate the sex and gave rise to the Negro woman’s recognition.

The first of the two groups is the women with occupations in business and trade. McDougald presents the idea that the Negro women once, “[began] as a uniformed maid in the shoe department of one of the largest shoe stores, pull[ed] herself up to the position of ‘head of stock’ “(McDougald 71). This is what the Negro woman set out to achieve and has prospered with such a huge accomplishment. A Negro woman advancing to a higher paying position defines her equalization to a male that once would hold a position of that nature. The entire story focuses on a woman who is,”dependent largely upon herself and her own race for work”(McDougald ). The second group consists of women in particular professions. Negro women have slowly become part of specialty professions such as nursing, legal, dental and medical profession. Once again women are acquiring jobs that were once only available to a man. Negro woman are quick to prove they are capable and willing to learn.

In addition, proving her success in the business world and becoming comfortable in rising to new positions will only lead to greater success and prosperity. She is beginning to gain respect and notoriety for her efforts from her race and the world watching her. An optimistic attitude accounts for some of the compelling titles and associations Negro women have created for themselves, such as the Utility Club, Utopias Neighborhood, Debutantes’ League and Sempre Fidelius. These titles and associations provide the Negro woman with her own identity. She is able to take ideas and create what she wants out of them. The Negro women has prospered in the sense that she has achieved her goal of success in business with her various job positions and she has achieved her goal of culture by creating a motivation for other women with that idea that woman are strong and independent. The Negro woman has overcome the stereotype of a helpless housewife into a dominating professional.

Both authors clearly show that it was the Negro’s desire to make history and to evolve from the day where accomplishing their goals seemed inaccessible to the day when they are proud of their accomplishments. Rising in the workforce, being an active collaborator, creating associations pertinent to only to Negro history and showing an independent and determined culture have allowed the Negro race to close the gaps of segregation and prove they are capable individuals.

They have a culture that is interesting and shows people today that even though you may have once been strongly discriminated against and culture labeled not valuable with determinism and goal of prosperity you can overcome inequality and increase racial pride. We can thank them for their perseverance which allowed them to have their history recorded. Without that information we may never had fully understood what made them struggle so hard and how they overcame their obstacles in order to gain prosperity. 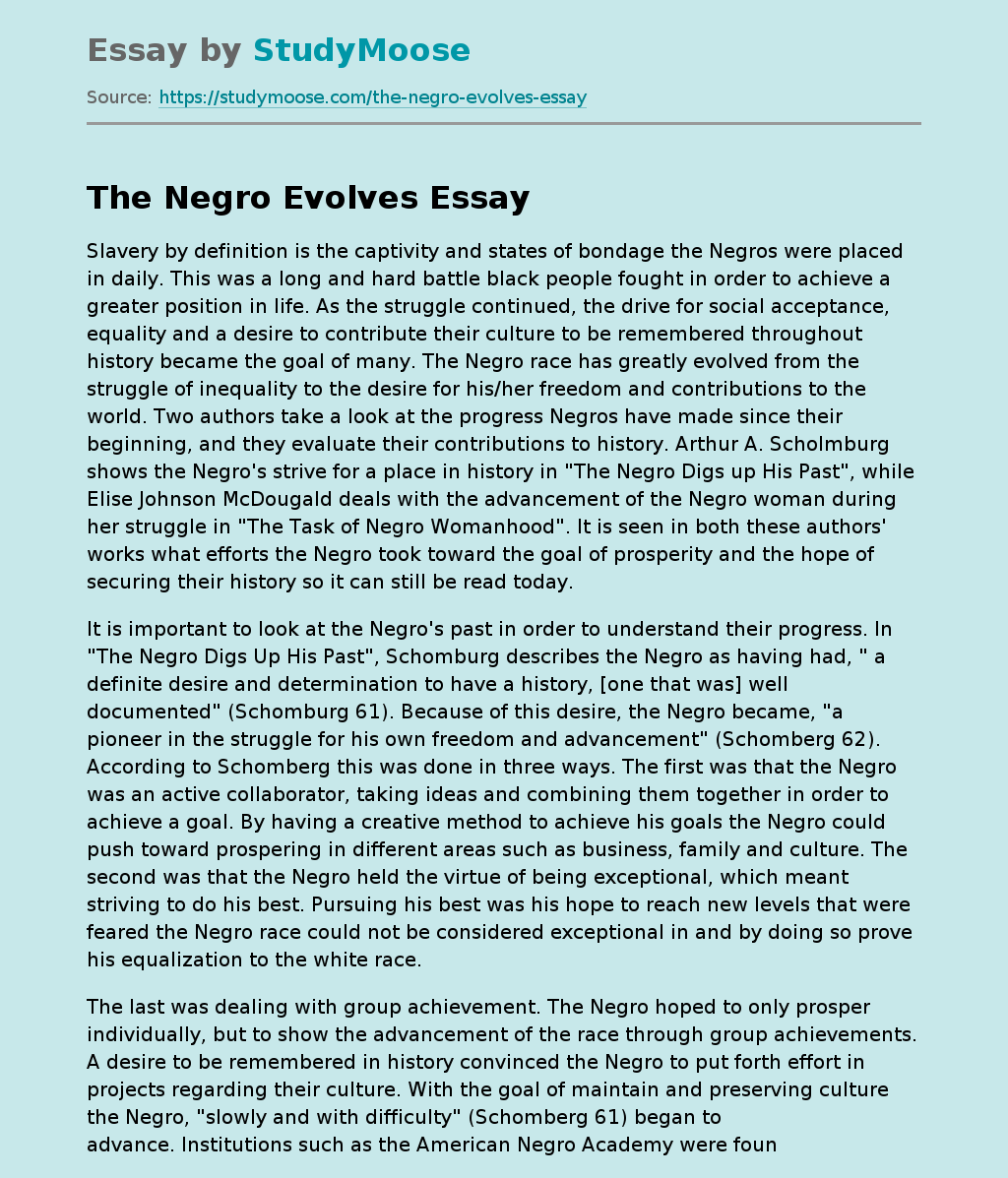