Living on minimum wage is anything but easy. A raised minimum wage seems so logical and easy. A fraise’ seems to be the perfect servant of social mobility. Most Americans agree that social mobility isn’t just a political ideal, but a national imperative. Raising the minimum wage isn’t an avenue to a fairer, more prosperous America. It’s an obstacle. For start, when the wage-raise supporters claim that a raise would avoid negative

Don't use plagiarized sources. Get your custom essay on
“ The Negative Effects of Raising the Minimum Wage in the United States ”
Get custom paper
NEW! smart matching with writer

Instead of raising the wage employment should offer company training/promotion more often to employees that work at low wages. Raising the minimum wage to $15 per hour may cause up to a million of people to lose their jobs instead of helping people who are getting underpaid. Obama had been trying to have a modest increase to $10.10 per hour. As Jonathon M. Trugman stated even with the modest increase it will still cut about 500,000 employments, where we do not need more unemployment.

With US as the highest corporate tax rate, we are not able to spend money for profits and employment wages. Instead the US is sending the money to America’s Treasury department.

“Labor is the major cost for businesses,” said Sean Karafin, an economic researcher with the San Diego County Taxpayers Association, who authored the chamber’s study. Local business would be affected from the raise. Such as a mom and pops restaurant or a local quickie mart would cut employee’s hours just to be able to afford the minimum wage.

As doing so the work force would be making the same amount as they would work $8 per hour as 40 hours a week. The amount would differ by twenty dollar different.

Minimum wage is supposed to help the poor to move up in the ladder so they won’t be labelled as poor anymore. As a young Asian American I have seen lazy people who believe they deserve a higher wage just because they are flipping a burger on the grill in a fast food joint. People should realize when we get hired the minimum wage is supposed to help us grow so we could ask our managers for the raise we earn. 2009 was the last time America raised minimum wage, the business that year had the lowest purchases percent. Business would have to adapt to the wage change since it would raise every year, if that happen they would need to have a plan on how to pay for labor and be able to purchase merchants.

As someone who worked in restaurants for a number of years, I know firsthand that cost control is a component for the managers. A wage raise will do most harm to applicants they would be based on the skills and potential they have; this would push out the poorly skilled employees. As Mr. Trugman stated “The minimum wage is by design an entry-level wage; it is not supposed to be permanent”

The Negative Effects of Raising the Minimum Wage in the United States. (2021, Dec 13). Retrieved from https://studymoose.com/the-negative-effects-of-raising-the-minimum-wage-in-the-united-states-essay 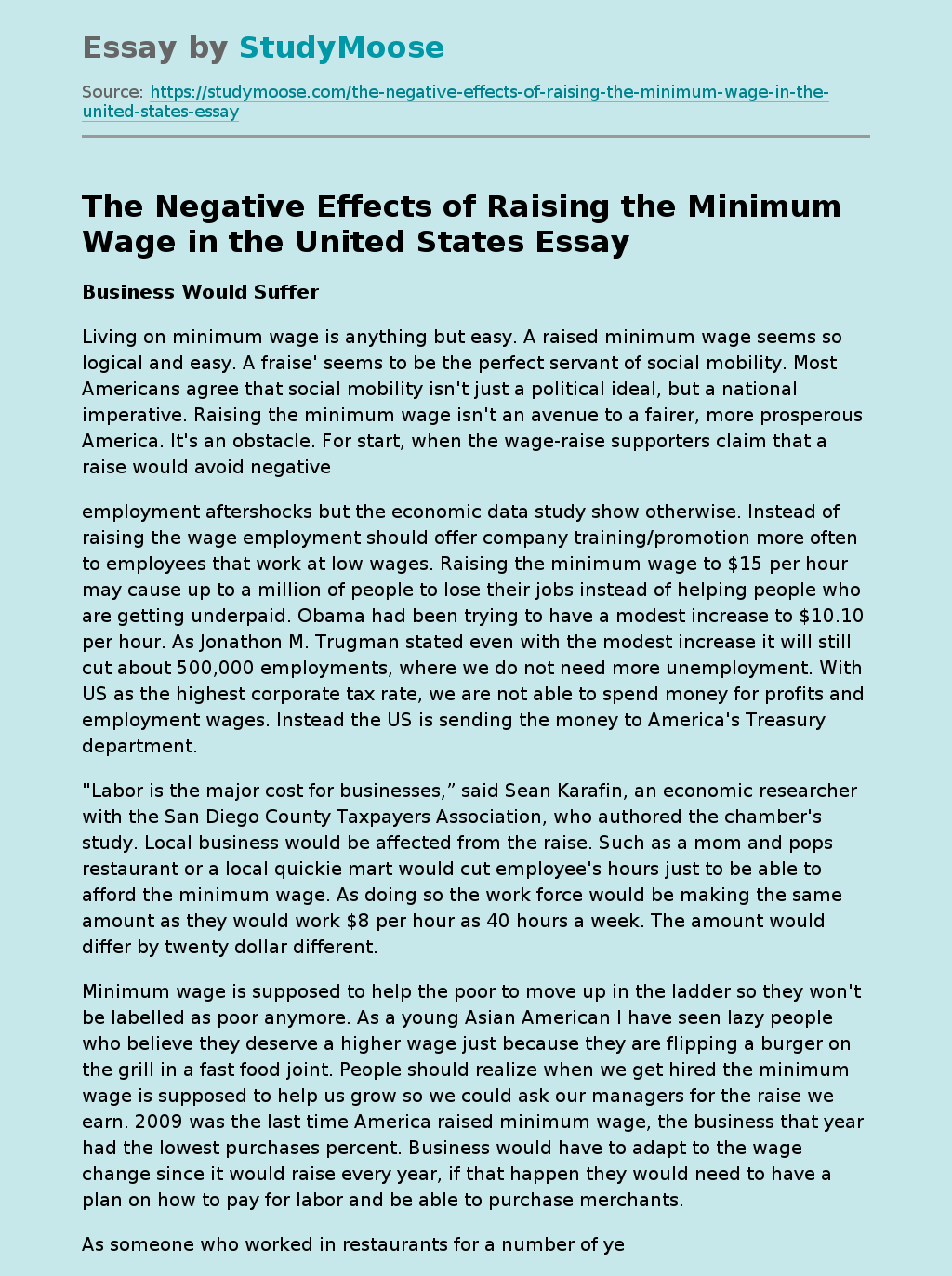