The Nature of Evil

What is evil? A question pondered by many. Blake tells us that ‘ Cruelty has a human face.’ Although ironic as evil is not external, it is suggesting that evil comes from within and is inside everyone. Blake is using the human face as imagery to show that it is not just individuals who can be evil but society as a whole. Both pity and mercy are products of this. Humans are the creators of suffering therefore encouraging such emotions; ‘pity would be no more if we did not make somebody poor.

Don't use plagiarized sources. Get your custom essay on
“ The Nature of Evil ”
Get custom paper
NEW! smart matching with writer

’ In this quotation, Oscar Wilde uses the word ‘we’ to refer to everyone and implies that society creates the suffering, which it then feels obliged to pity. No person is born evil; it is something that is formed through society. Thomas Hobbes says ‘In a state of nature, life is ‘single solitary, nasty, brutish and short.” The one single thing we are guaranteed in life is death, therefore why should we punish when surely God will decide our fate later.

The Oxford dictionary defines evil as being ‘either a force or power that brings about wickedness and harm’ or ‘a morally wrong act.’ However these are what society has defined evil to be.

Blake uses the analogy of a tree of evil, which ‘bears the fruit of Deceit.’ On the tree is a caterpillar and fly, which are making the fruit rotten and symbolise crime. The tree represents society and the insects are the criminals within. He also states that braches of this tree are growing in every human brain.

Blake’s poem, ‘London’ he says that the bad qualities of humans are visible in their face, ‘A mark in every face I meet, marks of weakness, marks of woe.’ He refers to the evils of war and the ‘hapless soldier’s sigh runs in blood down palace walls.’ Blake is symbolising the infliction of evil deeds forced upon the soldier by the upper classes and how it is accepted to kill during war. He then goes on to ‘how the youthful harlot’s curse blasts the new-born infant’s tear.’ This use of imagery draws the reader’s attention to the need for young mothers to resort to prostitution in order to support their families.

When a crime has been committed, we decide on an appropriate punishment, whether it be imprisonment or something less harsh such as community service. However this depends on the seriousness of the crime and which punishment the criminal and society would most benefit from. Imprisonment is the most intense punishment of all, yet does the criminal really come out reformed, or simply no better or even less able to cope within society’s rules than before they went in? Surely the option of reforming one’s self in prison is nearly impossible. How can a person become more morally correct when they are constantly surrounded by other people who have done wrong? And who has the right to define what is wrong and what is right?

Oscar Wilde discusses the death of a man being hanged, ‘But it is not sweet with nimble feet to dance upon the air!’ This is an inappropriate metaphor however it sarcastically used to remind the reader that it is a very immoral way to die. Society rightly criticised murder but allowed it to be used as a punishment, ‘that voice behind me whispered low ‘that fellow’s got to swing.” This is a contradiction of beliefs. Another fault of society is to judge and punish those who are different from the ‘perceived norm’, whether it is through their race, religion or sexuality. It is a ‘shameful day’ when a supposedly civilised country can overlook its own errors to single out others.

Is it the law, which defines evil? Or is it religion? Even though the Bible does not relate directly to today’s issues, it still contains many relevant morals that affect the world today, and on which many of our laws are based. The Bible introduces the Ten Commandments, the breaking of which is still immoral or even illegal acts nowadays. Although God labels certain acts, which are wrong, he is a strong believer in forgiveness. ‘The Ballard of a Reading Goal’ the lines, ‘And heard the prayer the hangman’s snare, strangled into a scream,’ show that the man who is being hanged is repenting. By referring to the noose as a snare it creates the image of an innocent creature being slaughtered. Perhaps in reality, it is only the immediate prospect of death, which prompts criminals to repent. If this is true, is it not immoral to punish a person who realises their mistakes? Surely if you repent you can be forgiven, and if punishment is a necessity then let it be milder.

Throughout ‘The Ballad of Reading Goal’ Wilde constantly refers back to ‘blood and red wine’, which is used to represent Communion. He explains the obscene truth of how Jesus came to save society, yet that was what put him to death. The poem reads, ‘blood and wine were on his hands when they found him with the dead.’ This use of language creates a contradiction as the Communion service is about forgiveness, however the man still lays there dead. Wilde explains that ‘ nor mark it with that blessed Cross that Christ for sinners gave.’ This then brings about the paradox that sin brings us closer to God.

Society punishes those who commit physical murder yet ignores those who destroy the emotions of others, mental murderers. ‘Each man kills the thing he loves’ whether it be ‘with a flattering word’ or ‘a bitter look.’ Is it not more terrible to mentally torture someone? Physical murder is short, and although it can be prolonged, this will most certainly be quicker than mental murder, which can last for years. Sometimes mental torture is not even recognised, as there are no physical bruises. Wilde tells us that, ‘The man had killed the thing he loved and so he had to die.’ However do we not all destroy the thing we love in different ways? This man was hanged yet we will all live. Is it right that we should severely punish someone who has killed when we are all guilty of destroying people? The man who has killed and is imprisoned suffers mental torture from the moment he enters prison until he is actually hanged. The man who as committed mental torture does not have to suffer. The murderer dies ‘a death of shame’ and the mental torturer is made to feel no remorse and no fear. ‘He does not stare, upon the air through a little roof of glass’ nor ‘cross his own coffin as he move into the hideous shed.’

The route of all crime is selfishness and the lack of consideration for the lives and feelings of society around us. Evil is the absence of all good. No man is born either good or bad. It is the things we hear, see and read that influence our decisions. Blake tells us that the search for the tree, which represents evil ‘was all in vain: there grows on it the human brain!

The Nature of Evil. (2020, Jun 02). Retrieved from https://studymoose.com/the-nature-of-evil-new-essay 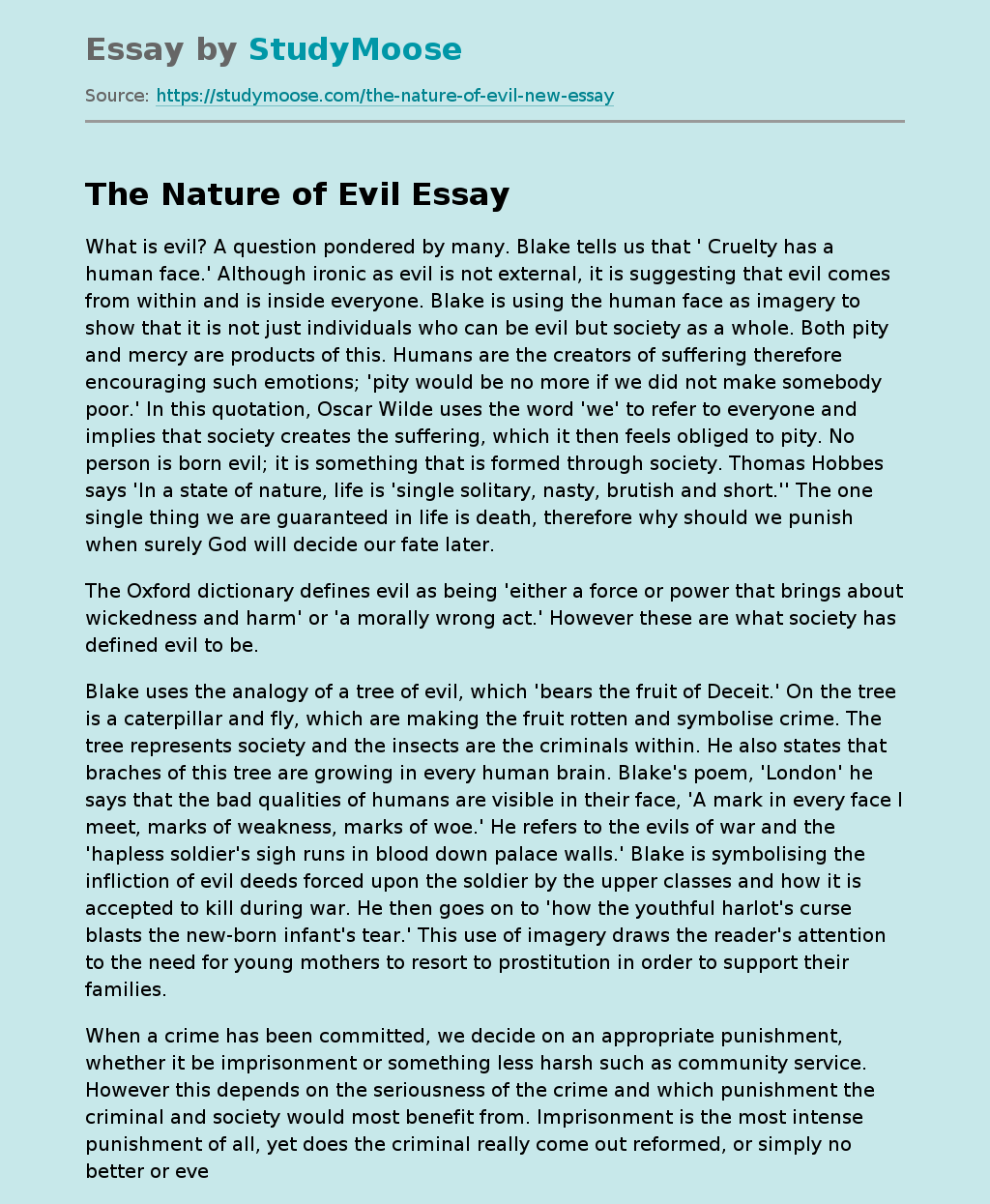