The Narrow Road to the Deep North Summary

“The Narrow Road to the Deep North” is one of the most magnificent works in classical Japanese literature. Basho was on the road for over a hundred and fifty days, almost entirely on foot. Even today Basho is revered in Japan for having the courage to abandon the material comforts of the temporal life in favor of the spiritual rewards of a life unfettered by possessions.

I respect people like Basho who was full of common sense. He has a character that was pure and penetrated by splendid emptiness.

Don't use plagiarized sources. Get your custom essay on
“ The Narrow Road to the Deep North Summary ”
Get custom paper
NEW! smart matching with writer

He also seems to have somewhat of a mid life crisis. In his work “the narrow road to the deep north.” The characteristic of individualism has played a strong role in the live of Basho. Basho displays similar acts of individualism in his story as he departs not only from his home but also from the traditions that have helped shape his life for many years. Basho’s character leaves behind the familial and societal values that were vastly presented in Japanese tradition.

With Basho’s decision to be individuals, he obtains new attitudes and standards that relate to money, education and security. His individualism reveals in his long trip when he acted as there is nobody around except him and the quite nature. “The narrow road to the deep north” was written based on nature and unappreciated creatures, like the flea and the frog. He appreciates nature so much that he writes what he sees and notices in everyday life.

Basho’s description of nature also reflects emptiness and loneliness in his inner spirit.

He starts to question the purpose of his existence when he sets off on his trip to the north. Somehow he was waiting for enlightment. He wrote: “I myself fell prey to wanderlust some years ago, desiring nothing better than to be a vagrant cloud scudding before the wind… But the year ended before I knew it… Bewitched by the god of restlessness, I lost my peace of mind; summoned by the spirits of the road, I felt unable to settle down to anything.” The new values and attitudes that people like Basho delivered are what brought Japan into a modern way of thinking and left the oldness.

“The narrow road to the deep north” is rich in sensitivity, quality and variety. Japanese literature in general ranks as one of the great literatures of the world. Their writing of Basho is artfully worded and structured, and it has always been characterized by its lyrical beauty. The beautiful nature of Japanese literature that is revealed in the story has stayed as one of the primary forms of Japanese art since the beginning of Japanese civilization to today. These factors combined with an ability to reach a person on an emotional and spiritual level, have and will continue to make Japan worthy of being one of the world’s great literatures.

The Narrow Road to the Deep North Summary. (2016, Jul 31). Retrieved from https://studymoose.com/the-narrow-road-to-the-deep-north-summary-essay 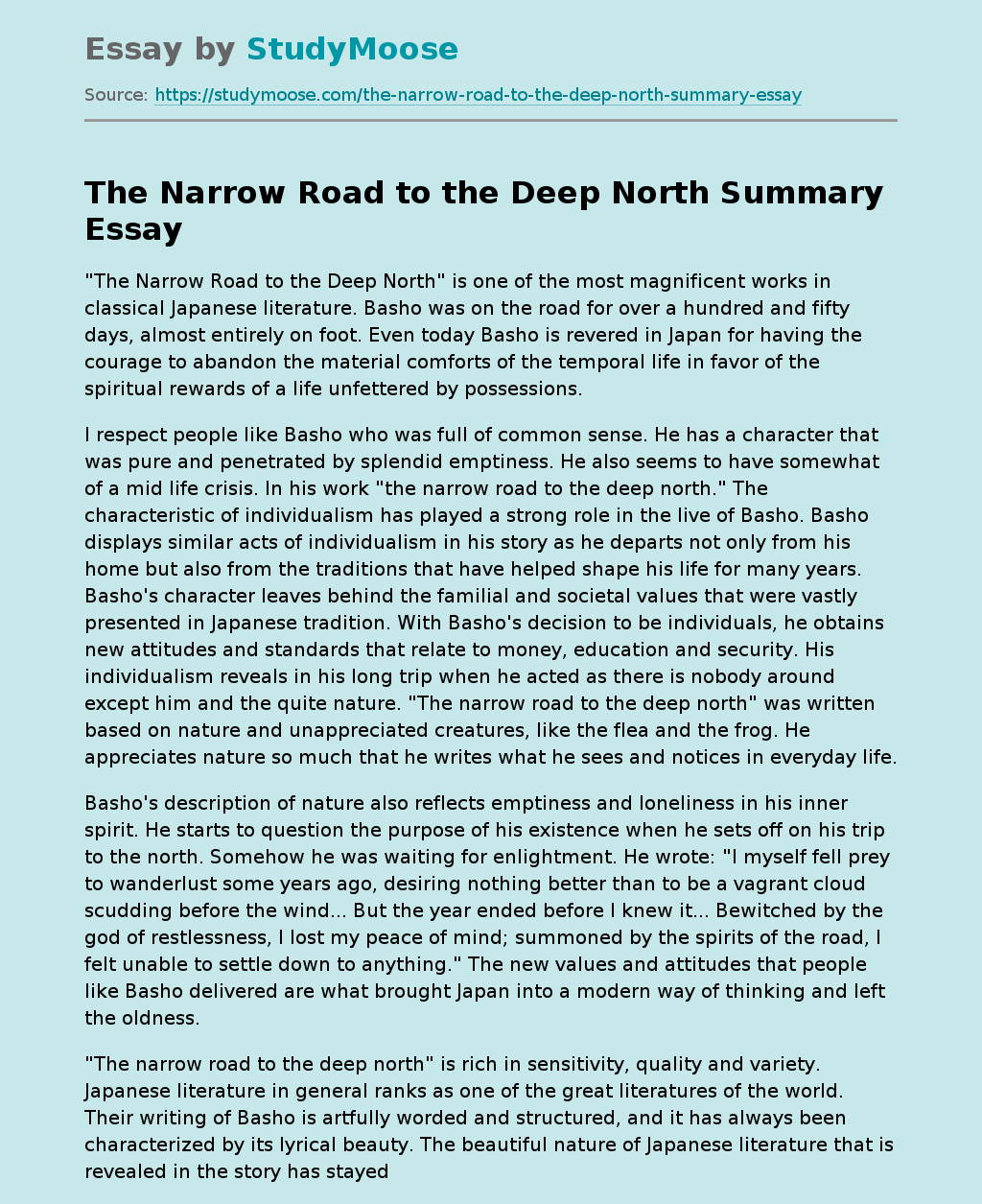