The Narrative of the Life of Frederick Douglas An American Slave

The Narrative of the Life of Frederick Douglass An American Slave was written by Fredrick Douglas and published by The American Anti-Slavery Society in 1845. Fredrick Douglas wrote three successful autobiographies, and was an African American social reformer, public speaker, abolitionist, and writer. After becoming a free slave Douglas published this book while slavery was still socially accepted in society. During which time Douglas wrote many anti-slavery articles and attended rallies in attempt to abolish slavery. His message was to share the absolute truth to the public in hopes his message would get through.

Don't use plagiarized sources. Get your custom essay on
“ The Narrative of the Life of Frederick Douglas An American Slave ”
Get custom paper
NEW! smart matching with writer

His Douglas narrative blew up the book charts selling over 35 thousand copies. His writing style is direct as if you were speaking with Douglas so this makes the book easy to understand. At the same time he does want to show off how well he can write after waiting all those years so we see big word being used. In the beginning of the book Douglas notes, “I remember the first time I ever witnessed this horrible exhibition.

I was quite a child” (Douglas 1.8 FIRST PAGE). Even when he’s sharing about his childhood he uses words like “Exhibition” to show us that he knows how to write now. Douglas wrote this book to empower readers with shocking information of the real slave life he went through and then persuade them with reason slavery is unethical and should be stopped. Fredrick Douglas goes through many life-changing events and along the way changes from being a slave with a dream to a free slave that conquered this dream.

Douglas Narrative begins as his sorrowful childhood was without knowing love from his parents. He lives with his white slaveholder Captain Anthony. Douglas lived with many other slaves on Anthony’s plantation, called the “Great House Farm”. Slaves on the farm were physically and verbally beaten, overworked, and forced to live without proper clothing. For Douglas he was exposed to most of this, but yet to experience the exhaustion of being worked to death and brutally punished. Douglas never knew what a mother figure was and when his died he wasn’t permitted to go and never knew that this was because he was a slave. At age seven his life completely changed when sent to live in Baltimore with Hugh Auld, a relative of Captain Anthony. Hugh Auld was a city slave owner, which meant for Douglas he had more freedom. At this time in history most of the public didn’t see behind the curtain of slavery and didn’t have knowledge of the abuse. So owners like Mr. Auld in northern city-states try not to appear as a bad owner of slaves. Ms. Auld, Hugh’s wife wasn’t exposed to slavery yet and tried to teach Douglas to read, because after his household duties he had some spare time. In history a white slave owner was typically not one to approve of education for a slave. Auld didn’t approve of Douglas’s reading and ended that for him. It was too late! Douglas had known too much to stop now and learned from homeless white children to read. Growing up Douglas heard about anti-slavery movements, which set his mind for the freedom and safety of the north. This is one of Douglas’s major themes: knowledge will set you to free, as for Fredrick Douglas. As a young adult he was a rebellious slave always discussing freedom and back talking the masters and received a lot of beatings because of it. Douglas’s will to fight for freedom was soon broken by Covey his was the terrible son of a bitch they called “slave breaker”. Douglas spirit was being beaten out of him until finally he broke, giving up on his chances of freedom. Not for long as Douglas fights Covey into submission. Douglas next went on to serve for William Freelander a better experience because he got to connect deeply with a family and teaches some of the slaves. Douglas befriends fellow slaves and strategizes a plan to escape on canoe. Douglas gets caught and sent to live with Mr. Auld and soon later escapes to New York. The theme of his newfound freedom is a character awakening, when entering New York, as he can be sociably accepted and appreciated by many white persons. He then pursued his careers as abolitionist, preacher, and anti-slavery writer.

A major theme example: knowledge is freedom is represented when Douglas was taught to read when he was 7 years of age. Douglas continues his fight for education as the answer to freedom influencing slaves this message. Douglas knows just being educated won’t set you free, but it reveals what slavery is. His view of education “opened my eyes to the horrible pit, but offered no ladder upon which to get out” (Douglas 47). Frederick Douglas devoted himself from an early age to first learning how to read and write from the white boys. White slaveholders are threatened by education and what it can do to a slave making them receive the end of the whip. Douglas’s narrative makes clear how the process of learning is the definition of his social consciousness and role in abolition and civil rights movements. Religion was also a major thesis in Douglas’s life, as he makes the distinction between what true Christianity is. Douglas shows that a slaveholders Christianity is in no way evidence of their inner goodness, but a way for them to believe in their own self-righteous abusing of slaves. This can be seen as a motive of the victimization of female slaves. In his narrative Douglas depicts the vivid images of the abuse women went though. Such as Aunt Hester whom Douglas witnessed get very badly beaten in the first couple pages. In detail Douglass’s describes how the mangled and emaciated bodies are meant to incite pain and outrage in the reader and point to the unnaturalness of the institution of slavery. The treatment of slaves as property is a motive throughout the narrative. Douglas’s bleeding message is the truth that slaves are human, but are being treated like property. Like that of a caged animal, slaves being taken from Africa almost never had a chance. Literally being worked to death as overseer’s would do and say nothing. Douglas finds this to be absurd and urges the cruelty must stop. Douglas’s resistance is seen many times fighting and back talking his masters and overseers. Douglas shows this theme of resistance to power when he first stands up to Covey the antagonist and main nemesis of Douglas. Douglas resistance to his owners is his key to manhood, but “Mr. Covey succeeded in breaking him” (Douglas 55). Douglas demonstrated a turning point were he no longer takes Covey’s beatings and fights back for his rights. Mr. Covey never bothered him again. This is because; Douglas has earned respect as a man for fighting which is linked to the coming of age theme, as Douglas becomes a man.

I though The Narrative Life of Frederick Douglas an American Slave was great triumph the way Douglas overcame slavery through his will and determination of education. This book makes me think about the power of education for how much Douglas was willing to fight for his dream, and the outcome of setting a man free because of that dream. Douglas’s journey from a slave to writer, orator is both fascinating and inspiring. Douglas wrote this narrative to inform the reader about the truth and reveal the awful institution that it is. For this reason I give the book a B minus. If one of my main purposes as an author is to captivate and persuade the reader that slavery is bad, I might have done the book in not only in the point of view of Frederick Douglas’s, but also other character such as Covey to know the evil in him towards a colored person. With different point’s of view in a story a reader can fully understand everyone’s feelings towards the subject, so including point of view of all major characters might show more to the recurring evil in a slaveholder. After reading the book my views of slavery have not changed. I still believe it to be one of the foulest acts of cruelty that has ever to have been let socially accepted. The fair treatment and equality of everyone still continues to be fought for and should be addressed even in today’s society.

The Narrative of the Life of Frederick Douglas An American Slave. (2016, Feb 28). Retrieved from https://studymoose.com/the-narrative-of-the-life-of-frederick-douglas-an-american-slave-essay 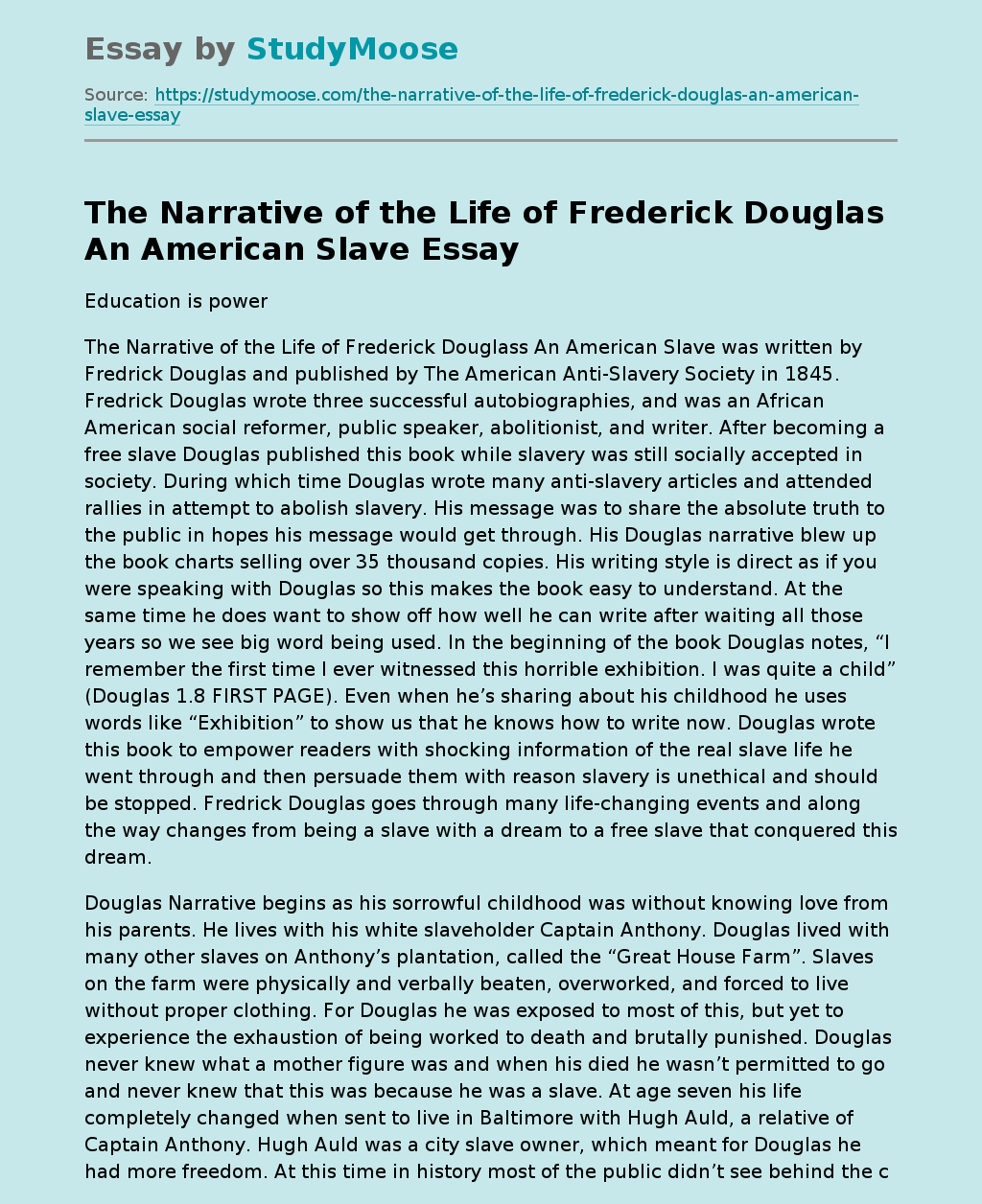