The name China most likely came from the Qin Dynasty

The name “China” most likely came from the Qin Dynasty (pronounced “Chin”), and has had a great impact on Modern China. While the Qin Dynasty only lasted 9 years, the impact of the Qin Dynasty and Emperor cannot be underestimated. Ancient Chinas’ Qin Dynasty united China into a solid union under a legalist form of government, created beautiful yet functional art, and had an Emperor that standardized the currency, measurement and script of the country for the first time. The Qin family was the first family to unify China as a whole, after being the most powerful family during the Warring Period.

Don't use plagiarized sources. Get your custom essay on
“ The name China most likely came from the Qin Dynasty ”
Get custom paper
NEW! smart matching with writer

The Emperor managed to standardize measurement, currency and written script across all of China to improve communication. The Qin Dynasty is also famous for its’ beautiful and unique art that has lasted even up to today. The Qin family came to power in 221 BCE as the most powerful family after the Warring Period (475-221 BCE) in China. After essentially winning China over from the other families, the Qin Emperor quickly united China to avoid another Warring Period.

China was ruled under a legalist form of government, like the late Qin state had been ruled by.

The land of the China was divided to 36 commanderies, which were in turn divided into sub countries. Each of the commanderies had a civil governor, a military commander and an imperial inspector who had to report to the Emperor (China Culture par. 2). The Qin was not the most culturally advanced family, but had the strongest and largest army of the warring families during the time before the Qin Dynasty.

In order to keep order the Qin Dynasty rulers utilized many new warfare technologies and tactics, especially in the cavalry divisions. Another lasting impact of the Qin Dynasty is the power of a leader’s personality in China.

Even after the end of the Qin Dynasty, the next Dynasties based their practices on many practices of the Qin Dynasty. Although the Qin Emperor was not well liked (China Culture par. 4), he brought together his country into a solid state with good communication between the people and the Emperor. From serving in the afterlife to protecting all of China, art in this Dynasty was beautiful as well functional. Many families during the Warring Period built walls to protect their land (Great Qin Wall par. 2). It was not until the Qin Dynasty started the previously built walls were connected into a 5,000 km wall (Great Qin Wall par. ). The wall stood for many centuries, and sections of it still stand today, however the Great Wall that you see today has either been rebuilt over the over all or constructed completely new in the Ming Dynasty. The sections of the Qin wall that still stand are well preserved and had stood the test of time. This wall not only stood as a means of protection, but as a symbol of power over the other states and to the Emperor. The most famous pieces of artwork of the Dynasty are the 7,500 clay sculptures that make up the terracotta army in the burial chamber of the Emperor.

These sculptures were placed in the chamber in place of the servants that used to be buried with Emperors, to protect and serve in the afterlife (China Culture par. 3). The sculptures are outfitted with real weapons, chariots and pottery horses. Each face and pieces of armor were carved individually so that none of them look exactly the same (Hollihan-Elliot 15). These pieces of art had functionality, and were unique to China and the Qin Dynasty. The Qin Emperor standardized many things to further his country and improve communication across the large mass of land.

Writing and numbers were standardized in the written script to improve officials’ communication with each other and the Emperor. During the Warring Period, many different types and variations of scripts were used, making communication difficult for everyone (China Culture par. 3). Standardizing written script into a single script was less confusing for the people who ran the vast country. Cart axel measurements were standardized and made equal all over China. Cart wheels made deep ruts in the soft paths and cart that did not have the same width wheels and axels had difficult times travelling on the imprinted roads (Dynasties of Asia par. ). The carts were needed to bring things for trade in and out of the main cities, and if they could not travel properly on the roads, the shipping was delayed or the carts toppled over, losing varies supplies and food. Currency was simplified into a round copper coin, with a square hole in the center for stringing them on the rope. These copper coins completely removed the bartering system (Dynasties of Asia par. 3). These standardizations, most of which are still in place today, more solidly unified China and helped pushed the influence of China and its culture forward.

Ancient Chinas Qin Dynasty had beautiful, unique and functional art, was the first true unified China, and had an Emperor who standardized the country. This Dynasty is the greatest Dynasty simply because these things, many of which have stuck around for centuries in Chinese culture even up until today. While the Qin Dynasty was short, its legacy has lead other, better Dynasties up to what they were. Most other Dynasties practiced were tweaked based on the Qin Dynasty, making it the greatest Dynasty in Chinese history.

The name China most likely came from the Qin Dynasty. (2016, Oct 22). Retrieved from https://studymoose.com/the-name-china-most-likely-came-from-the-qin-dynasty-essay 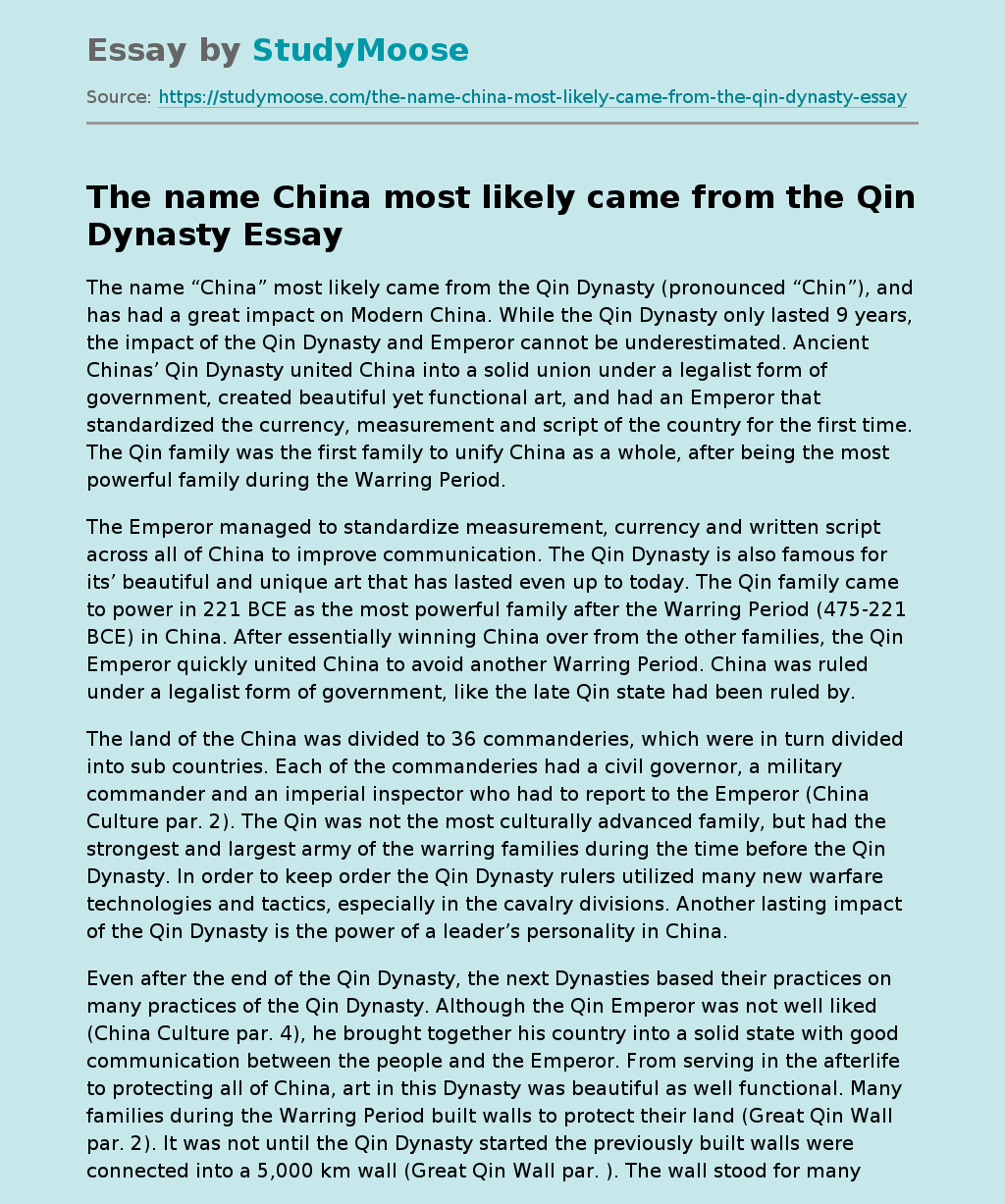