The Myth Of Perseus Vs. The Movie Clash Of The Tit

Whenever you read a book and then go watch the movie, most of the time they don’t follow the same events in the same order. Just like in the myth “Perseus” and the movie, Clash of the Titans, the event are not all the same and some of the causes of the events are not the same either. Different things happen in the movies that are not even close to some of the things in the myth. These differences can either make the story better or just make it less interesting.

Turn in your highest-quality paper
Get a qualified writer to help you with
“ The Myth Of Perseus Vs. The Movie Clash Of The Tit ”
Get high-quality paper
NEW! AI matching with writer

Polydectes then said, “Yes, why don’t you go do that, kill Gorgon Medusa.” Perseus agreed to it and began his journey to kill Medusa.

During the movie, Clash of the Titans, Perseus was on his journey to find a way to kill a Titan, and during this time he went to the Three Witches and ask for help on how to kill a Titan. The Witches told Perseus that if he were to cut off the head of Medusa and show it to the Titan, that the Titan would turn to stone.

Perseus agreed with the idea and left for his journey to kill Medusa and get her head.

The second difference from the myth and the movie is that Perseus used different ways of transportation and took different routes on his journey to find Medusa. During the myth, Perseus was accompied with Athena and Hermes as a guide and to help. He and his crew used a boat to sail across the seas to find Medusa.

Then during the movie, Perseus picked some noble men to accompany him. He and his crew traveled along trails and up mountains to find Medusa. There were many obstacles for Perseus and his crew along the way, such as monsters and other evil creatures out to get him. Perseus used horses to steer him and his men along the long journey on land.

The last difference of the movie, Clash of the Titans, and the myth “Perseus” is how Perseus stole the eye from the Three Gorgon Witches. In the myth, Perseus found the cave with the three Gorgons and watched them closely pass the eye back and forth. As he watched them, he decided to grab the eye when the time was right when none of the sisters were using it. Then with extreme quickness, Perseus grabbed the eye from the witches and none of them even knew it.

During the movie Clash of the Titans, Perseus was given a mechanical owl by a god, Athena, to help him. When Perseus was in the cave with the three sister Gorgons, he decided to send the owl to go get the eye from the sisters. So at just the right time when neither witch was using the eye he would send his owl out to go grab the eye. Perseus did with success and he then had the eye of the Three Gorgon Witches.

Movies are not always like the story in a book. There are always going to be a difference and those differences can be appealing or not depending on what you and can be either excellent or terrible depending on the person.like. Just like in the movie, Clash of the Titans, and the myth “Perseus” the events are different.

The Myth Of Perseus Vs. The Movie Clash Of The Tit. (2016, Jul 22). Retrieved from https://studymoose.com/the-myth-of-perseus-vs-the-movie-clash-of-the-tit-essay 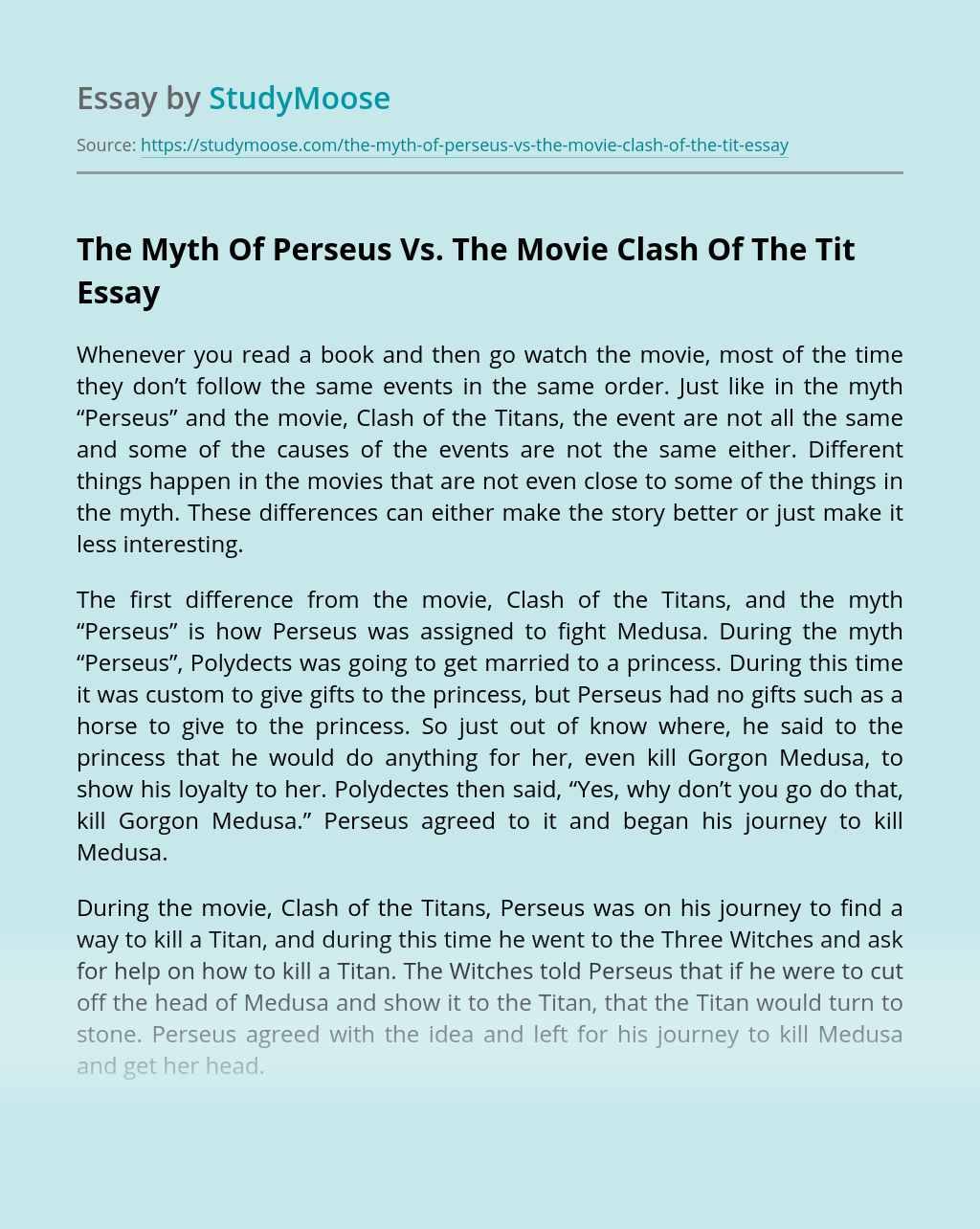 Turn in your highest-quality paper
Get a qualified writer to help you with
“ The Myth Of Perseus Vs. The Movie Clash Of The Tit ”
Get high-quality paper
Helping students since 2015
Stay Safe, Stay Original