The movie, "The Princess Bride"

The movie, “The Princess Bride,” also a novel written by William Goldman, is the wonderful tale of Buttercup, a beautiful young woman of Florin and Westley, her beloved farmboy, whose true love guides them through many struggles and leads them to a “happily ever-after ending.” It is a classic example of the romantic mode, with its great deeds, pageantry, and courtly love. The hero, Westley, is on a quest to rescue his beloved Buttercup, but many obstacles stand in his way.

“The Princess Bride” illustrates the elements of the romantic mode through Westley’s journey to save his love, the many supernatural occurrences that take place in the imaginative land, and the positive and negative values of a society.

As in accordance with romantic mode, Westley encounters many struggles and tests through his journey. Along his way, he is captured by the Dread Pirate Roberts, but he eventually makes friends with him, and the title is passed on to Westley himself. Back in Florin however, Buttercup has been announced the future queen, and captured by three travelers, Fezzik, the giant; Inigo Montoya, the Spaniard/swordsman; and Vizzini, the brain.

The travelers were hired by Prince Humperdink to kill Buttercup, framing the neighboring country, Guilder. Westley finds Buttercup in the possession of the travelers once they arrive at Guilder, climbing the Cliffs of Insanity. Westley must first sword fight the Spaniard in order to progress, which de does easily. His next battle is with the giant, Fezzik, whom he also manages to defeat. His third battle is with Vizzini, the brain of the group. Westley manages to trick him at a game of whit, which leaves Vizzini dead. As a result of beating the three travelers, Buttercup is now in the hands of Westley. The next problem the lovers face is that they are being followed by Prince Humperdink, so they journey into the fire swamp.

Inside the fire swamp, the couple face the three terrors: the fire spurt, which there are able to avoid because it makes a loud popping sound right before it spurts; the lightning sand, which Buttercup discovered; and the R.O.U.S.’s, Rodents of Unusual Size, whom Westley defeats with minimal wounds. Westley and Buttercup are able to escape the fire swamp, but Humperdink and his men catch up with them before they get very far. Humperdink takes Buttercup back to the castle, and falsely promises that Westley will be returned to his pirate ship on the coast.

Instead, Westley is locked in the Pit of Despair where he is tortured to death. With the help of Inigo Montoya and Fezzik however, he is rescued from the Pit and brought back to life by Miracle Max. Finally, he rescues his beloved Buttercup from the evil Humperdink, and they ride into freedom with Fezzik and the Spaniard. This story follows the romantic theme perfectly, as Westley returns home, victorious in his quest as the romantic hero.

The romantic theme is also demonstrated through Westley’s supernatural encounters in the idealized setting. Along his journey, Westley meets up with very strange beings, some of those whom possess magical powers. This element of the story follows the romantic theme throughout the story because the romantic mode often contains elements of the supernatural. One of the beings that Westley associates with, and the first, is the R.O.U.S., or the Rodent of Unusual Size.

The next element of the supernatural is Miracle Max and his wife Valerie, a warlock and a witch, whom heal Westley back to life. The third element of the supernatural is the magic that Miracle Max possesses. He is able to bring a dead man back to life, and in fifteen minutes! The other part of the romantic theme that is demonstrated in “The Princess Bride,” is the imaginative setting. The story takes place in a make-believe land, in two different countries, Florin and Guilder. These countries are lands of castles, fire swamps, and the Cliffs of Despair. The romantic mode, as demonstrated through this movie, often takes place in an idealized setting with many magical characters.

The third and final element of the romantic theme is the positive and negative values of a society. In the magical land of Florin and Guilder, small parts of the real world that we live in is reflected into the story. The characters in the movie have characteristics that are common to those of the real world. Prince Humperdink has both jealousy and selfishness, which is shown when Buttercup tells him that she loves Westley. Also, the three travelers are hired by Humperdink to kill Buttercup and frame Guilder for her murder. This would cause the people of Florin to go to war with Guilder, for killing their beloved princess.

Through this act, Prince Humperdink shows his rashness and hostility. He is the source of most of the negative characteristics of our society. However, there are also Buttercup and Westley, who provide the love and devotion that are positive values of our society. Throughout the movie, Westley does not give up hope, for what he and Buttercup have is true love. “I will always come for you?this is true love?think this happens everyday?” The positive and negative values of our society are reflected through the elements of romantic mode throughout this love story.

The story of “The Princess Bride” demonstrates the elements of romantic mode through its tale of high adventure and true love. The elements are found in Westley’s adventure to find his beloved Buttercup, the supernatural characters in the make-believe world, and the positive and negative values of a society. It is a true story of the romantic theme because of the elements it contains. These elements make the story appealing to everyone because it is the perfect combination of fencing, fighting, torture, revenge, giants, monsters, chases, escapes, miracles, and true love.

The movie, "The Princess Bride". (2016, Jul 23). Retrieved from http://studymoose.com/the-movie-the-princess-bride-essay 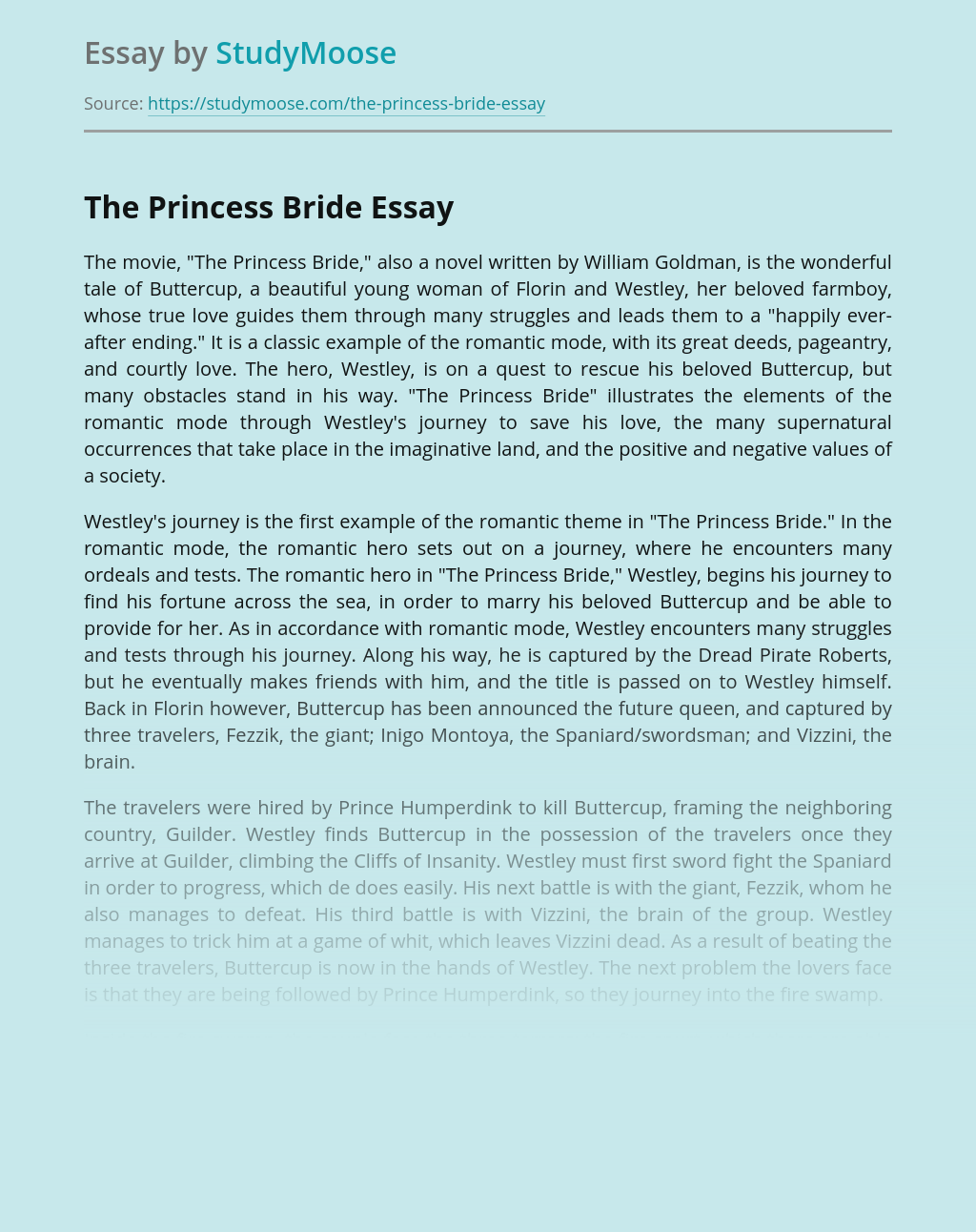 Don’t waste time
Get a verified expert to help you with The movie, “The Princess Bride”
Hire verified expert
$35.80 for a 2-page paper
Stay Safe, Stay Original