The movie "The Crucible"

The movie The Crucible was made in 1996, its main characters are John Proctor, Elizabeth Proctor, Abigail Williams, Reverend John Hale, and Judge Danforth. Early in the year 1692, in the small Massachusetts village of Salem, a collection of girls fell ill, falling victim to hallucinations and seizures. New England’s Puritans extreme involvement with religion led to the theory that frightening or surprising occurrences were often attributed to the devil or his cohorts. The incomprehensible sickness stimulated fears of witchcraft, and it was not long before the girls, and then many other residents of Salem, began to accuse other villagers of consorting with devils and casting spells.

Don't use plagiarized sources. Get your custom essay on
“ The movie “The Crucible” ”
Get custom paper
NEW! smart matching with writer

Old grudges and jealousies were exposed in to the open, while the air was getting filled with chaos and hysteria. The Massachusetts government and judicial system, heavily influenced by religion, jumped in to action. Within a few weeks, dozens of people were in jail on charges of witchcraft.

By the time the fever had run its course, in late August 1692, nineteen people had been convicted and hanged for witchcraft, as many as thirteen people died in prison, and one person was pressed to death.

The facts from the movie seemed accurate, and were somewhat similar to the genuine facts that occurred in this event; although the film did have its distinctions. To me, it would not had made a difference if I didn’t have a background on the topic. It also would not have left me with a false impression because all the facts and information I acquired, was predominately identical to the way I visualized it.

When Mary Warren points to Abigail when Hale initially asks the girls about the dancing in the woods and then Abigail implicates Tituba, more girls (not just Abigail) cast charms to make males love them, the girls are shown dancing in the forest in the beginning, Tituba is beaten into confession. George Jacobs appears in court.

George Jacobs is hanged for witchcraft, Ruth Putnam testifies in court against George Jacobs, Abigail gropes John Proctor and kiss as they talk about their affair outdoors, Abigail meets John Proctor in the woods to talk about her afflictions she has received by George Jacobs and Elizabeth and Abigail makes John Proctor grope her during the conversation in the woods. The court scene for George Jacobs where he is on trial, Martha Corey laughs at the proceedings, and the Nurses leave the court, Sewall and Danforth have a conversation where Sewall questions Goody Putnam’s sanity, the truth of the girls’ story and the honesty of Mr. Putnam’s word. Danforth retorted, “Out of the mouths of babes shall come the truth” and “Justice can’t wan’t for the testimony of saints. “The girls gang up on Mary in a separate room before turning on her in the court, Andover is never mentioned, Abigail tries to accuse Reverend Hale’s wife of witchcraft and is denied. People are seen avoiding Abigail in the streets and saying, “God have mercy on your soul. “Abigail comes to see Proctor while he is in prison, and when John Proctor, Rebecca Nurse, and Martha Corey are hanged in front of the townspeople are all examples of the modifications that were made slightly different.

I believe that the film provides a basic understanding about the material of this event, but when I researched and analyzed information and facts about this event, it gave me a better, and more historical understanding about the occurrence of this event. For instance, I learned that The Crucible is set in a theocratic society, in which the church and the state are one, and the religion is a rule demanding total obedience, a strict form of Protestantism known as Puritanism. Because of the theocratic nature of the society, moral laws and state laws are one and the same: sin and the status of an individual’s soul are matters of public concern. There is no room for deviation, since any individual whose private life doesn’t conform to the established moral laws represents a threat not only to the public good but also to the rule of God and true religion. In Salem, everything and everyone belongs to either God or the devil. This opposition functions as the basic logic behind the witch trials.

As Danforth states in the play, “a person is either with this court or he must be counted against it.” The witch trials are the ultimate expression of intolerance and the elimination of numerous individuals from the community. The movie contributed my understanding of the events by simply acting it out, I am able to create and imagine what it was like at those times. But I occasionally tend to overlook the event and forget that the devices that exist now, did not exist back then, therefore I mislead and confuse myself. However when I’m watching the film I understand all the portions of the book (or in this case the play) that I had misunderstood earlier. I personally adored the film The Crucible, especially the ending, however I change that one part when Abigail gropes John Proctor because it was exceedingly awkward and uncomfortable to watch, other than that, I wouldn’t change a thing. I rate The Crucible with four stars because there weren’t many variances from the play or from what I researched. I only recommend this movie to the individuals out there who are truly obsessed with history and love reading about it, as for those who are not crazy about history, I recommend that they don’t waste their time reading about some chaotic nonsense caused by an overly obsessed little girl and accusations of witches made by the puritans because they were led to the assumption that everyone in Salem was possessed. Daisy Dominguez

The movie "The Crucible". (2016, May 24). Retrieved from https://studymoose.com/the-movie-the-crucible-essay 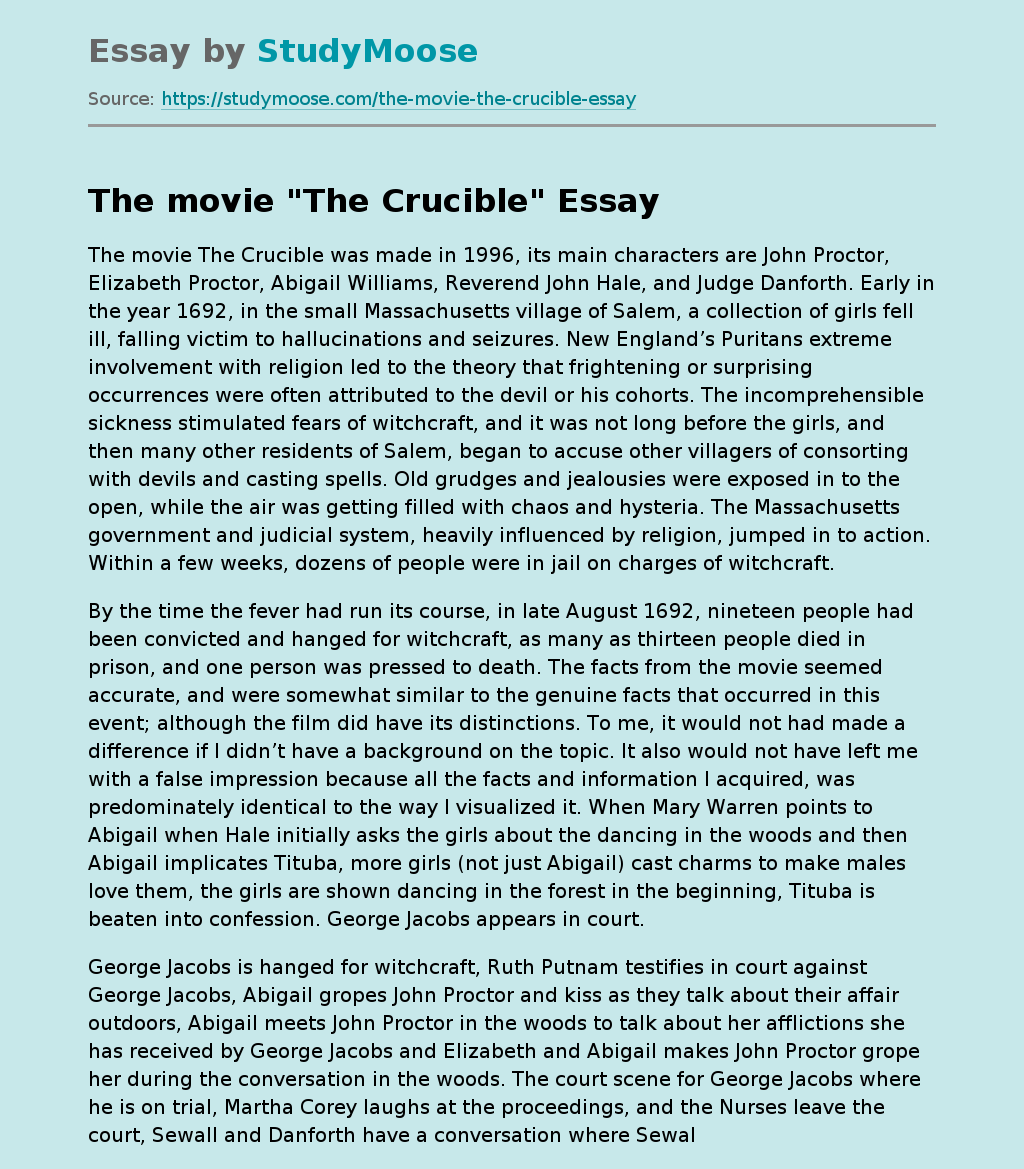