Anytime a film is watched its viewers criticize it. Whether they are positive or negative comments depend on the writer’s opinion. Timothy Corrigan mentions six approaches to writing about film, in his book titled A short Guide to writing about film. In this essay I will discuss how the movie Halloween, directed by John Carpenter in 1978, can be related to five out of the six approaches by Timothy Corrigan. When a writer uses an approach that organizes and investigates films according to their place within a historical context and in light of historical developments; this is known as Film History.

Don't use plagiarized sources. Get your custom essay on
“ The movie Halloween ”
Get custom paper
NEW! smart matching with writer

As time progresses so does technology.

When a person watches a film from the 1950’s he/she would be able to tell from what time period was from. Black and white films and few special affects represented movies from the 1950’s. Perry in the 19 nineties most films are in color and are filled with great special affects. The movie Halloween was made in 1978.

It was made to represent the present time period. This was done so the viewers would think it might be possible for these actions to happened to that.

If it was a horor movie that took place 50 years in the future, the audience wouldn’t have the fear because they weren’t living through that specific time period. y viewing Halloween and nothing on how it was bound, one would be able to tell that it was made in the 1970’s. the scenes that were supposed to be so glory and harmful were really not discussing or graphic at all.

When Michael Meyers was stabbing his sister with the knife all the audience saw was the night frustrating back and forth. We rarely ever saw the weapons enter the body up close. I feel this is because Halloween was the first of a slew of slasher films, besides Psycho which was directed by Alfred Hitchcock overt 20 years before Halloween was filmed. Maybe John Carpenter didn’t know how graphic he could get in his movies.

When the kids were getting murdered it seemed as though their cry for help was laughter from getting tickled rather than from getting stabbed with a knife. After the mergers took place, the victims were really that bloody as one would expect. According to the National Cinemas approach, ways of seeing the world and ways of portrays the world in the movies differ for each country and culture. This approach has to do with a person from one culture viewing a film from another culture. I feel Halloween can represent a culture. Like I said before it was the first of slasher films to come.

Nobody really ever experienced these kinds of movies because they were never released. When it was released in 1978 people probably talked about it so much because it was something new in the world of film. In today’s society if a horrorslasher film was released people wouldn’t really think place about seeing, because they have been viewing them 20 years. Genre is another approach to writing about film. It is a category for classifying films in terms of common patterns of form and content. We identify a set of similar themes, characters, and narrative structures that link movies together. Halloween is a horror movie.

When one attempts to watch a horror film he must realize that the director is going to try to make him scared. I feel by making the audience frightful, the director is doing a good job by carrying out the horror theme. By viewing a horror film one must expect blood and board because mergers and death play a big role in these movies. Also in horror movies there is always that character who people here. Whether it is a human who murders people or a fictional monster character who eats people, they are always present in horror films. Auteur criticism identifies and examines a movie by associating it with a director or with a star in a film.

Anyone who is a fan of watching horror movies, will know the name John Carpenter. He is well known for making the series of Halloween movies. Like I mentioned earlier he is recognized for bringing about the slasher films to society. Throughout the years, Carpenter made another or schools from the first addition of Halloween in 1978. I feel there have not been too many changes in his style of making movies. Basically, Halloween to Halloween 5 revolved around the same character, Michael Myers, coming back to his home town to get revenge. Formalism has to do with the structure and style in a movie.

Carpenter makes us watch the background of this film. He films it in such a way, that the objects in the background sneak up on the characters in the movie, as well as the audience watching the movie. Carpenter placed the car stolen by Michael Myers in the back of the scene numerous times. Michael Meyers was also given by doors and shadows throughout the movie. Throughout this essay, one could see how he approaches to writing about film discussed by Timothy Corrigan can be related to the film Halloween. The approaches that I chose to write about our film history, natural surmise, your onerous, upstairs, and kinds of Formalism. 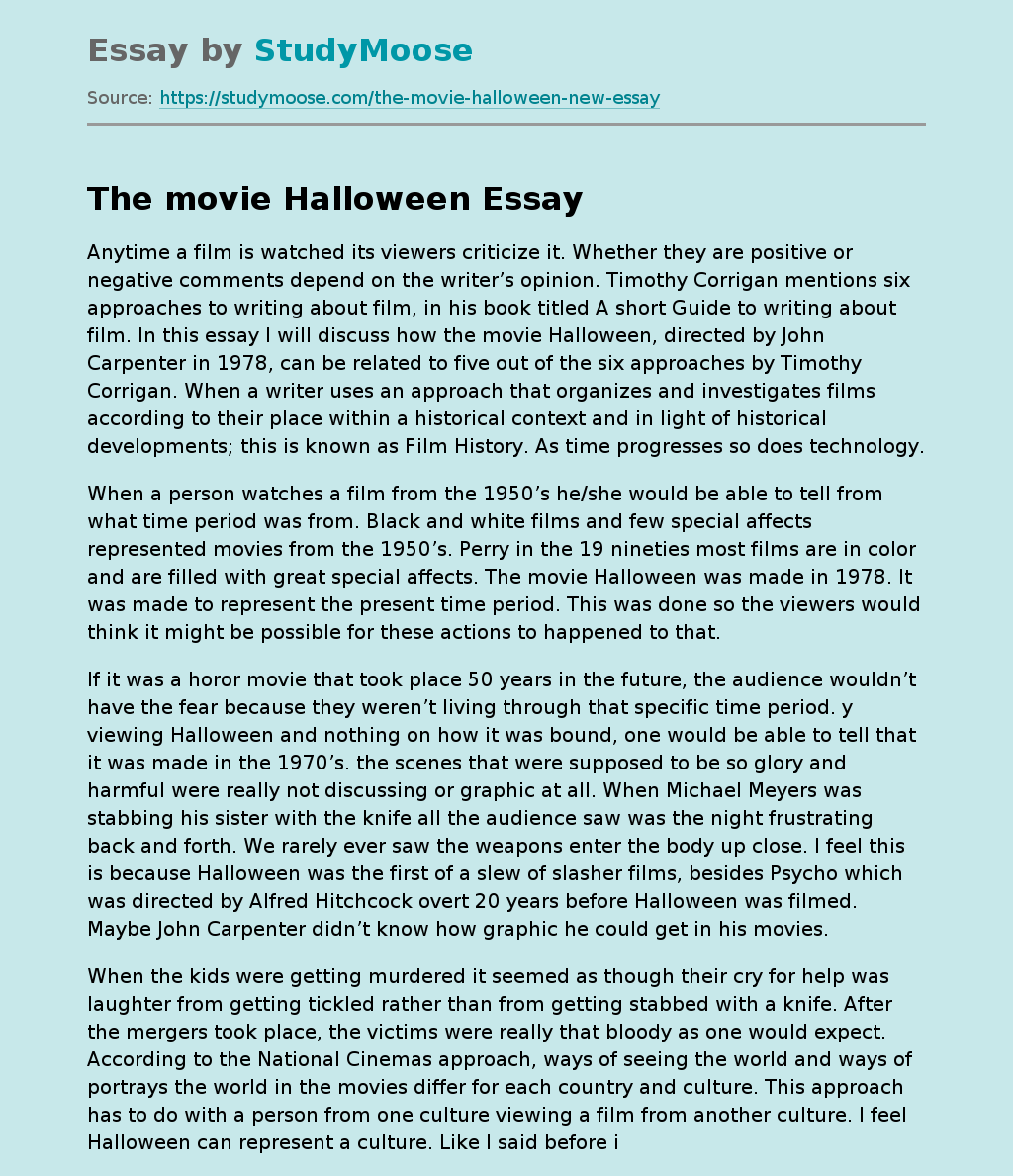