For the Philippines, the seventies was more than just a period of shaggy hair, bell-bottom jeans, platform shoes, and disco music. It represented the rise of the conjugal dictatorship of Ferdinand and Imelda Marcos, a U.S.-sponsored regime characterized by military repression and wholesale human rights violations. Conversely, it was also the fecund period for the sociopolitical awakening and involvement of many Filipinos; the humus for the renowned religious-political event, the 1986 EDSA People Power Revolution.

Don't use plagiarized sources.
Get Your Custom Essay on The Movie “Dekada 70” Just from $13,9/Page

[2] Dekada 70 journeys with the central character Amanda Bartolome (Vilma Santos), the reticent wife of an alpha-male husband, and the worrying mother of a boisterous all-male brood. Thoroughly relegated to domesticity in a world slathered in testosterone, Amanda begins to undergo a transformation when her family becomes imbricated in the sociopolitical realities brought about by the Marcos dictatorship.

The declaration of Martial Law, the lifting of the writ of habeas corpus, the curfews and police searches, all these could have easily floated past Amanda’s head had her sons not found themselves caught in the crossfire between the government and the pro-democracy movements.

As one son after another faces the oppressive forces of the dictatorship, Amanda gradually realizes that the personal is political. While chanting slogans for sociopolitical change, she finds her own voice and comes to terms with the fullness of her own person. [3] It is notable that in the film, the divine presence is sublimated in the refusal to acquiesce to societal structures that perpetuate injustice. The characters’ eyes are opened to the dehumanizing impact of such oppressive structures and they join in the prophetic denunciation of what they have identified as ‘not-God.’

This importantly resonates with the praxical imperative associated with theologies of liberation, which configure God as imbricated in the collective protest of the oppressed. Amanda then, in her ‘conversion to justice,’ can be seen as synechdochic of the epiphanous ‘becoming’ of Filipinos as a true people of the eucharist. [4] Based on an awarded novel of the same title, Dekada 70 essays Amanda’s personal and political journey is a patient navigation of each year of the seventies. To director Roňo’s credit, the film has a clear focus and steadily gets to its point through engaging but inobtrusive camerawork. The politically-charged scenes are strident enough to be visually disturbing, yet tempered enough to work on a more psychological level.

[5] There are touches of seventies style Filipino humor that foreign audiences might miss; they effectively establish that this is a real, average Filipino family trying to navigate through the eye of the political storm. The acting is generally impressive, most especially that of lead actress Santos, who gives a luminous, sensitive performance. Santos essays the transformation of Amanda so effectively that we do see clearly at the end of the film that there has been a fundamental change in her character. [6]

If there is something to be faulted about the film, it is Roňo’s failure to keep melodramatic moments in check. The funeral sequence of one of Amanda’s sons, for instance, becomes an over-extended session of copious tears. The rich story material of Dekada 70 could do away with such ‘in your face’ paroxysms, which only work to dull the film’s cutting edge political trajectory. [7] Nonetheless, it cannot be denied that Roňo had created a noteworthy, epic-scale Filipino film, and on a Third World budget at that. It also cannot be denied that Roňo had not forgotten the sentence of history on his home country. [8] Neither will Filipino audiences. 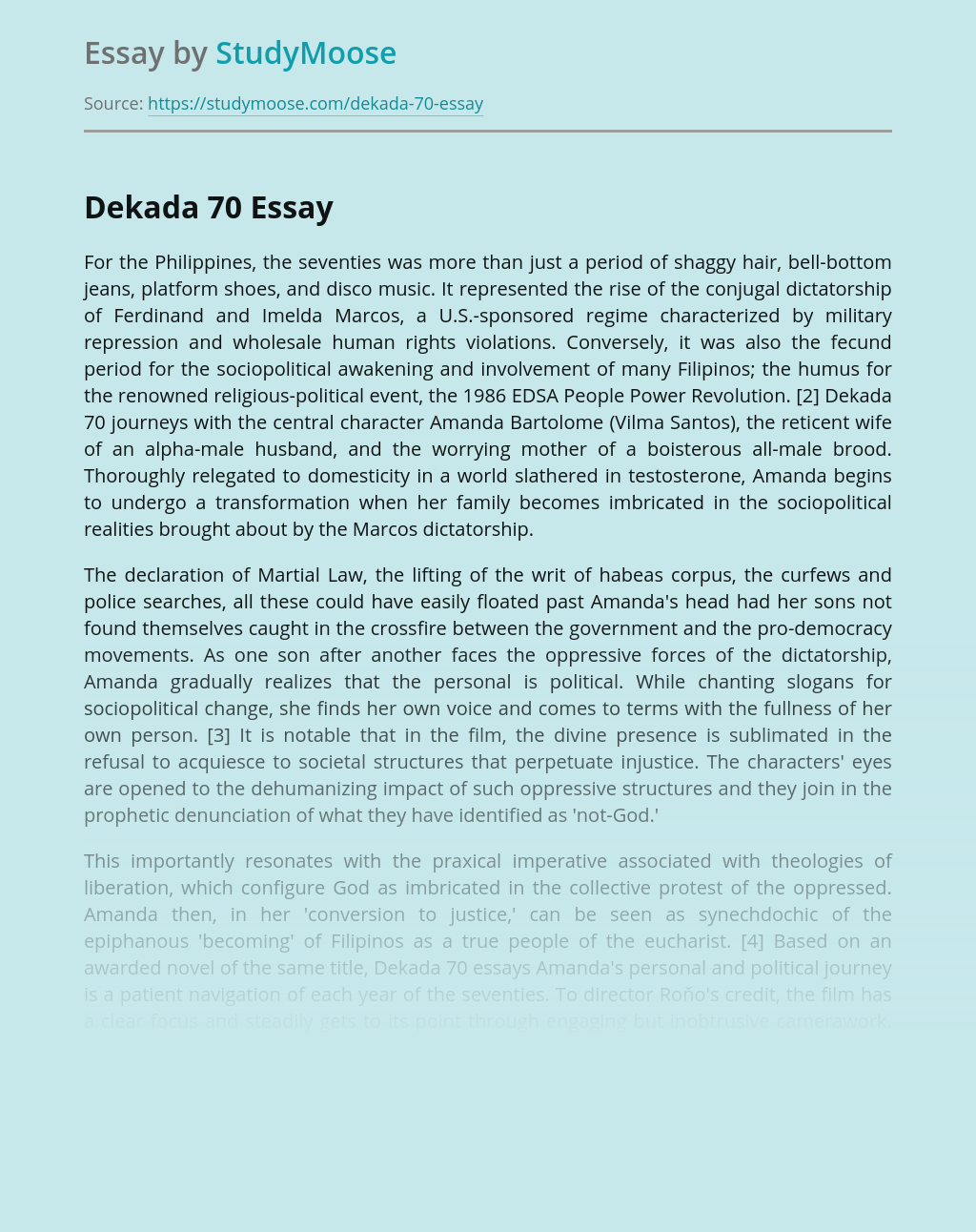 Rate this post F.W. Murnau’s “Nosferatu” is a traditional visual tale of Bram Stoker’s “Dracula”. The quiet film is filled with obsession and lust, surrealism as well as the prosaic style of good versus wicked. The movie states the tale of Hutter, a property representative hungry for money, and his journey to vampire Count Orlak’s...

Rate this post “No more lessons. I have a question, though. Those two foul shots at the end of the game… did you miss them or did you miss them? ” This is the biggest question of the whole movie and also a huge part of the movie. Finding Forrester was a movie about a...

Rate this post Every so often, a film comes along that shocks people and forces them to acknowledge issues and realities that are normally taboo in open society and are fodder for conversations with therapists. The film “Fight Club” (1999) directed by David Fincher is just one of these films. How do people react when...

Rate this post Does it ever feel like it’s so very hard to get what you want? Coyote Ugly and Burlesques are two very similar movies. Both of these movies show how hard people have to work to get what they want. It is smart to always push yourself and prove to yourself that you...

Summary of “The Lord of the Rings: The Two Towers”

Rate this post Rowel Tolkien is one of the founders and creators of fantasy, as a genre. One of his most famous books calls “The Lord of the Rings.” There is also an interesting film based on this book by a director Peter Jackson. Most people think of this creature as a unique storyline with...

Rate this post San Francisco. Dazedness John “Scottie” Ferguson was terminated from his situation as a police reviewer following a genuine expert wrongdoing: in a housetop pursue, he was mixed up and a cop kicked the bucket attempting to help him. A previous secondary school companion, Gavin Elster, executive of a shipbuilding organization claimed by...