The Mission Of Southwest Airlines

The mission of southwest Airlines is dedication to the highest quality of Customer Service delivered with a sense of warmth, friendliness, individual pride and Company Spirit (Ruppel, 2012). The people of Southwest are the single greatest strength and most enduring long term competitive advantage (Kelly, 2012). Southwest Airlines started out as Air Southwest Co in 1967; serving only three local airport hubs in Texas. The hubs were San Antonio (SAT), Dallas (DAL) and Houston International Airport (IAH).

Currently IAH has been renamed to the Bush International Airport (Kelly, 2012).

Don't use plagiarized sources. Get your custom essay on
“ The Mission Of Southwest Airlines ”
Get custom paper
NEW! smart matching with writer

In the beginning there was severe opposition from competitors such as Continental and Trans Texas. This was mostly due to the business model that Southwest was presenting to the Texas Aeronautics Commission (TAC), where Southwest was going to be flying only a few short dedicated routes and flying them cheaply. This business model was going to be financially straining on other airlines that were running those routes but at a higher cost.

Southwest got its biggest break when Boeing agreed to sell Southwest three 737-200’s and Boeing carrying 90% of the financing (Kelly, 2012).

This allowed Southwest to not have to acquire capital at a high interest rate; thus allowing more capital to be invested into the initial Southwest business model. The biggest factor affecting Southwest during its initial startup and still to this day are its competitors (Goolsbee and Syverson, 2011). The extent to which rivalry exists will influence the overall profitability of the industry.

al. 2011). The level of customer satisfaction attributed to Southwest is staggering. The results from a double blind survey were released on 10/28/2009 by Smarttravel. com and the results might as well have been called “Southwest vs. US Airways Survey”. Southwest dominated the total favorable columns while US Airways carried a majority of the negative results (Anonymous, 2009).

Even with high customer satisfaction and continued support from the public, there are several things which cut into not only Southwest’s bottom line, but the bottom line of every air carrier. Issues such a fixed costs in relation to the costs of planes, fuel, pilots, flight attendants and staff to handle baggage can easily climb into the millions. There are additional hidden costs that an airline ponies up when it delves into the realm of frequent flyer programs/benefits, newer computer systems in order to stay competitive.

In order to alleviate some but not all the costs of running an airline; Southwest looks to maximize their load factors by increasing revenue for passengers per miles flown; the issues that arise here are when there are empty seats per flight. In order to mitigate this, Southwest has had to redevelop its business model. The new business model included no charges for baggage; lower miles needed in order to get free ticket and more leg room (Kelly, 2012). When the profit line for Southwest started to increase, competitors saw this and started to copy key points of Southwest’s business model.

Currently Southwest Airlines handles more than 3300 flights per day and employs over 37,000 employees in all facets of the airline industry. With such a large and robust employee pool and amount of flights going each day, Southwest has had a net income of over $459 million in 2010 and a net income of over $550 million in 2011. Since 1976, Southwest has 138 consecutive quarterly dividends to its shareholders and is openly traded on the New York Stock Exchange (NYSE) under ticker symbol LUV (Kelly, 2012). Some of the biggest assets for Southwest are its’ distinctions from its peers and competitors.

Southwest sells over 84% of their seats at a discount; of that 84%, 25% are still available the day of the flight at the discounted rate. Southwest has almost 82% of its workforce unionized, the 18% that is not is comprised of contracted hourly workers. In 2011, Southwest Airlines won over 18 different awards, the closest competitors won only eight awards (Kelly, 2012) With all the accolades and awards that Southwest has won, it, like all the competitors share one common threat. Terrorism, the TSA lists sky terrorism as one of the most significant threats to domestic and foreign flights (TSA, 2012).

Southwest has embraced the guidance of the TSA and fully integrates Federal Air Marshals on almost all flights it carries out daily (Ruppel, 2012). All in all, Southwest is the best low cost, frequent flying airline available. With flights to almost anywhere in the continental United States and with over 100 additional locations being worked during this calendar year; Southwest doesn’t look to be slowing down and going bankrupt anytime soon. With over 40 years of airline experience, Southwest is here to stay. ?

The Mission Of Southwest Airlines. (2017, Jan 15). Retrieved from http://studymoose.com/the-mission-of-southwest-airlines-essay 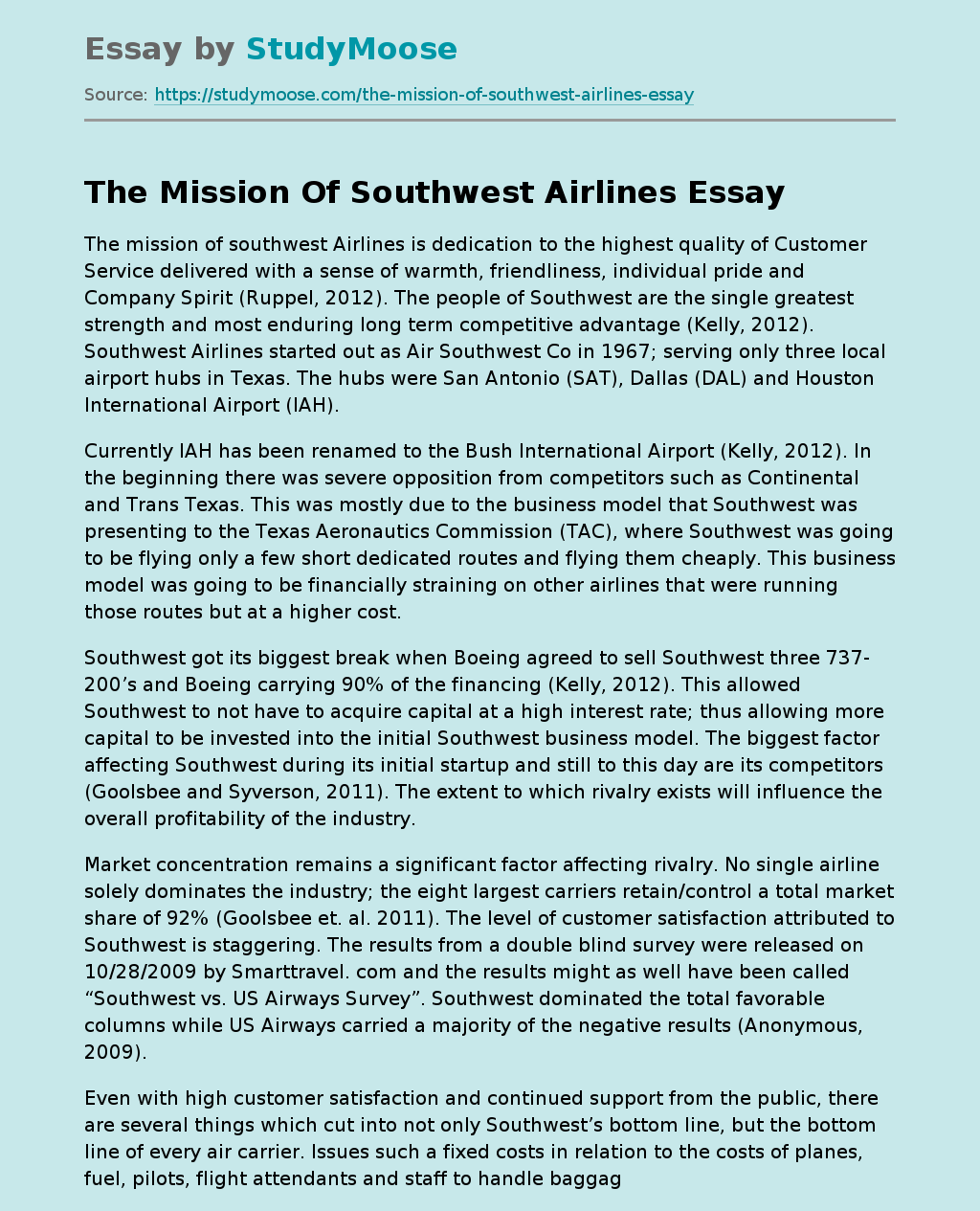